In the last few days I have written blog posts about the latest creations by Dutch truck builders (Nanko Klein Paste’s DAF and Dennis Glaasker’s Scania), but now it’s my own turn.

Since about two years, I’ve been building a collection of British vehicles to display at shows. In the summer of last year, I travelled from Portsmouth to York in the company of a group of British LEGO-building friends, going to a LEGO-show. Along the way we discussed my plans for building more British vehicles. During the five-hour drive we saw at least two dozen trucks operated by the Stobart Group. This company was founded by ‘Steady’ Eddie Stobart and operates more than 2000 trucks, mostly Scanias. They are ubiquitous in Britain and instantly recognizable. It was obvious that, if I was going to build a truck for my collection, it had to be a Stobart truck (or lorry, as my friends insist on calling it). 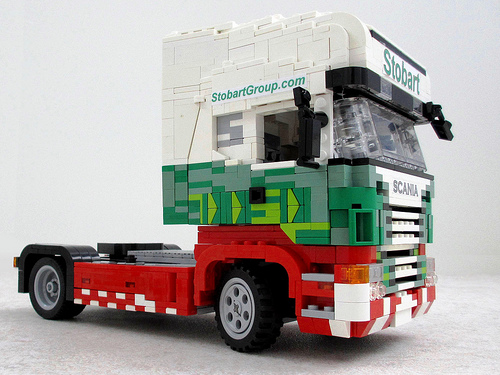 It took me a while though. One of the things that make these trucks/lorries so recognizable is their rather funky-looking colour scheme and even though the graphics on the real vehicles are done with stickers, I wanted to build them out bricks. This was complicated, obviously, but the end result does give a decent impression of what it looks like on the real Scania.

In little more than a week, the 2013 Great Western LEGO Show will take place in Swindon in the UK. My collection of British vehicles will be on display there, including this truck, as well as my B-52 model.

2 comments on “Stobart Scanias rule the roads of Britain”