I think Guss De Blöd accidentally spilled a little Novvember in his SHIPtember. If that doesn’t make any sense to you, well, don’t worry about it. For several years, the LEGO flickr community has enjoyed doing themed monthly build challenges, and this year they’ve become particularly pervasive, with Marchikoma, SHIPtember, Maktober, and Novvember just off the top of my head. We’re currently in the middle of SHIPtember, and flickr is awash in SHIPs (that’s Super Huge Investment in Parts, aka capital ships). Even if it does seem to get a little bandwagon-y at times, the themes challenge a lot of people to build outside their normal comfort zones, and get some people to just build at all. And so, back to Guss’s orange machine, which appears to be a mash-up of two themed challenges. Regardless of any of that, though, it’s a lovely spacecraft, and the orange highlights are very striking. 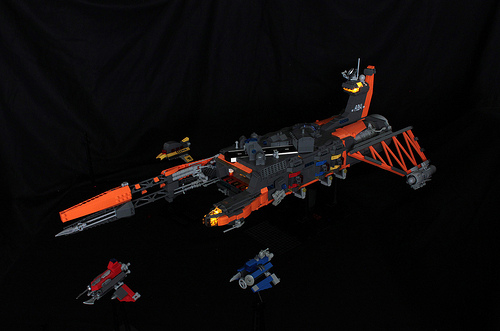