This mind-blowing working compound crossbow is completely LEGO, and made by builders extraordinaire Sean and Steph Mayo (Siercon and Coral). Be sure to check out the video of it in action! Not only does it shoot, even the cables are made from LEGO train electronics wires. 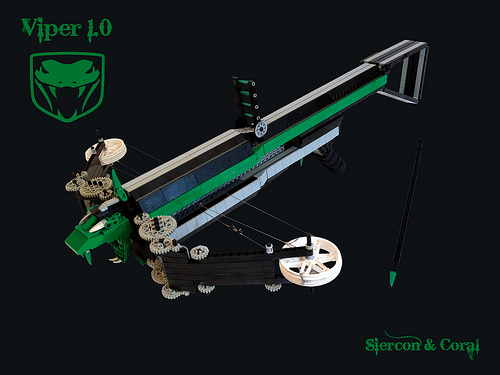 The Brothers Brick snagged a quick interview with Sean and Steph about this awesome creation:

The Brothers Brick: Where did you get your inspiration?
Sean and Steph: We wanted to use LEGO to shoot a projectile, building something other than a catapult or a trebuchet. We’ve seen lots of epic brick built guns online, and thought it would be tons of fun to create a custom Lego compound bow. This quickly evolved into crossbow for extra stability, as the bow is under tons of tension.

TBB: How long did this build take?
S&S: We probably spent a week playing around with the different mechanics. We had a lot to figure out about the flexibility of LEGO pieces under stress, how much the train cables could take, and which pieces would be useful for the cams. Once that was sorted the actual construction in a couple days.

TBB: Why a compound Crossbow, wouldn’t it have been enough to just create a bow?
S&S: A regular bow honestly would probably have been more effective as a lot of the natural flexibility of the LEGO pieces makes them more conducive to a recurve bow rather than a compound bow. But for ages we’ve been fascinated by the cams, idler wheels, and the mechanics of a compound bow, so we wanted to give it a try!

TBB: How many pieces did you use?
S&S: We usually don’t count the pieces we used, and have no clue how some builders do it, but we estimate around 1700 pieces.

TBB: How far can it shoot/how much would it hurt?
S&S: Disregarding the outliers, it can shoot around 40 feet. As a bow without the compound element it could shoot farther, but we couldn’t resist trying to build the cams. As far as how much damage it can deliver, we’re not entirely sure. We have yet to shoot anyone with it, and it is tipped with a flexible rubber lego (both for the competition this was built for and to minimize any accidental injury). It can likely stick into drywall with a sharp enough tip, but not much else.

TBB: What is it designed from? Is this from a video game or something similar?
S&S: This is an original design, but influenced by the Spartan Laser aesthetic from the Halo series. We also wanted to use the green spikes as viper fangs, so we tried to stick with venomous snake inspired highlights. We picture this to be something a Green Arrow vigilante might carry around.

Be sure to check out some of Sean and Steph’s previous insanely awesome creations, like the giant sushi roll and Cortana hologram.