The latest model by Nick Barrett (technicnick) shows a scene from 1956. That year, the Ecurie Ecosse (which is French for Team Scotland) with Ivor Bueb and Ninian Sanderson and their glorious Jaguar D-type racing car won the famous 24 Hours of Le Mans, beating drivers such as the legendary Stirling Moss. 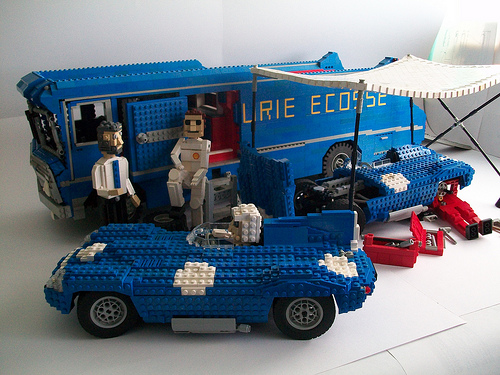 There’s a lot more to like about this diorama. The two race cars have beautifully sculpted bodies, that in defiance of what most of the ‘cool’ people do, boldly show lots of studs. Kudos to Nick! The reproduction of the team’s custom-built transporter has elegant brick-built letters and nice chrome frames around the windows. At a first glance, the lovely canopy looks as though it could be made out of cloth, but it is actually built largely using 1×2 bricks. Finally, the brick-built figures seem to have character somehow.

I’m very much looking forward to seeing the model at the Great Western LEGO Show (aka. Steam) in Swindon (UK) on October 5th and 6th.