Ever seen a 6-wide train naked? No? Well now’s your chance thanks to TBB rookie Alexander (narrow_gauge) who brings some fresh blood to the genre. Alexander quietly goes about his business with calm precision so common to his tribe of builders:

“Power comes from two PF large motors each mounted in a carriage. In between them another carriage carries a battery and IR receiver. With the motors geared down, top speed is a little slow, but reasonable for narrow gauge. There are two designs: one has the motor on its side which reduces the amount of room each side but leaves room to put a 12V train weight above the motor. Tow ball couplings are used between the motor cars – with a simple pivot coupling they tended to derail.

Alexander isn’t averse to showing off his work to the great unwashed masses either, as evidenced by this gorgeous photo from the recent Caulfield Train Show 2013 in Australia. There is some decent video from the event here, although only a small portion of it is LEGO related. 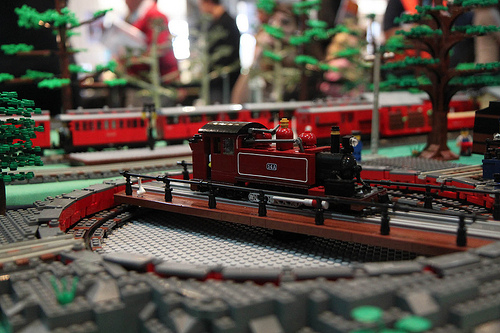 *Edit: Although I’m a fan of the genre, you could fill a teacup with my actual knowledge of Train related action. The stock is actually 6-wide, so my initial posting didn’t make much sense.

5 comments on ““Do you like to watch movies about gladiators?””