A few weeks ago, Brother Andrew took us on a trip through Cyberpocalypse as it was presented at BrickWorld Chi-Town. A few weeks later the diorama was presented in its entirety for BrickFair Virginia, and it is my distinct honor to bring you extended coverage of what is without a doubt my favorite sci-fi diorama to date. Carter Baldwin and BroLUG manage to accomplish what is perhaps the most difficult aspect of collaboration; the seamless merging of diverse builders into a cohesive scene. When looking at convention-driven collaborative projects in person or online it is typically very easy to tell where one builder’s work stops and another begins, but such is not the case with Cyberpocalypse.

The influences for the project should be obvious to any fan of the genre; William Gibson, Blade Runner and Akira to name just a few, but I was surprised to learn that BroLUG also cites Kowloon Walled City as a major inspiration. Who knew the Bro’s were so literate and talented at beer pong too? Instead of me rambling on about the wonders of collaboration, I will provide excerpts from the Cyberpocalypse exit interviews conducted earlier this week. 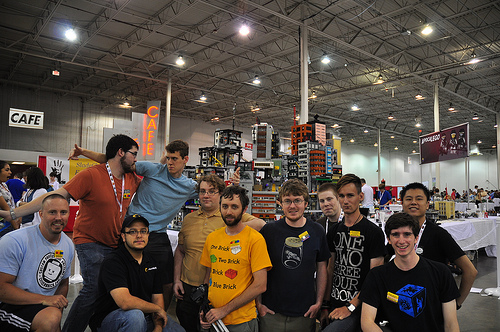 Carter Baldwin is the somewhat reluctant Captain of BroLUG, a non-geographical club which seems to be equal parts RoninLUG, KeithLUG and a high-school Lacrosse Team. Carter (he’s the one in the photo with the nerdy Firefly shirt) was still loopy from the weekend’s shenanigans but with a little coaxing he was able to focus long enough to share his thoughts on the whole cat-wrangling endeavor.

“Throughout this project there were three things I found indispensable; concept art, caffeine, and noise rock…This display was definitely the most ambitious Lego project I’ve ever undertaken. Considering how poorly it could have gone, I’m beyond pleased at how well it all turned out. As much as I like to think that I run the show the real stars are all the contributors. I want to give particular props to Nate Brill and his builds inspired all of us to push our boundaries.” 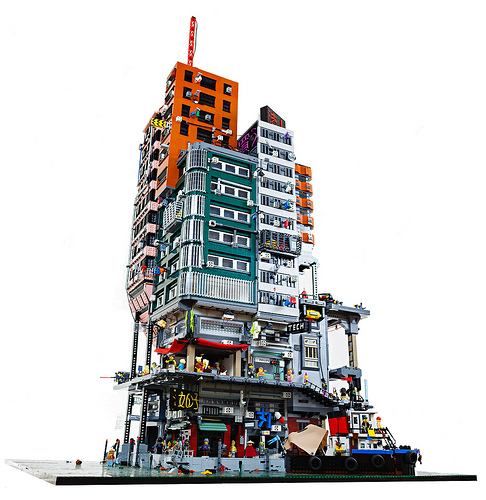 “Displaying at BrickWorld this year definitely made a difference. It gave us the chance for a dress rehearsal, and being able to debug the display before the final product at BrickFair helped to ease the stress some. BrickFair is the home convention for BroLug and we’ll probably always have the main event there in Virginia, but Chicago definitely has its charms and arguably a better after-hours scene. Being able to turn off the lights at BrickWorld really brought the display to its full potential; we slipped a speaker system inside one of the hollow facades and had a crowd ‘mirin the display throughout the evening.” 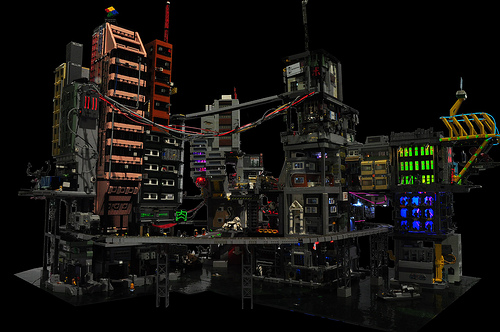 “Following our display at BrickWorld we caught the interest of a documentary crew, which was a neat experience though at times off-putting. They had a definite story that they wanted to tell which was at times at odds with the facts. I was complicit in several half-truths caught on camera, most particularly being asked to state that BrickFair was the debut of the display and that I had no idea how it would turn out – when in fact BrickWorld had been the debut six weeks earlier and I actually had a very clear idea of how the display would turn out.” 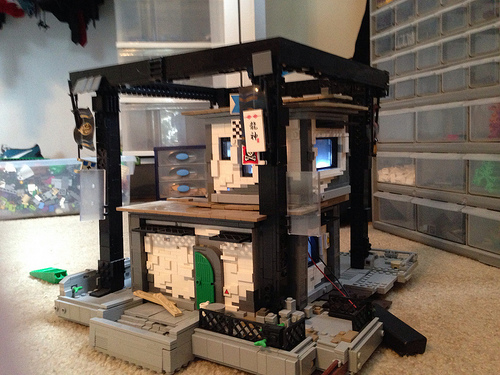 – Sam Wormuth had almost too much to say about the all important technology:

“I got my Cube Island Moderator status by sleeping with the Coordinator on several occasions.”

– Dillon Samuelson agrees that without the miracle of Cube-Tech, the whole diorama would have been doomed to utter and complete failure:

“I think Forest’s modular system deserves some credit for how quickly this was put together. Previous years we’ve spent most of the convention trying to piece together our display but we got this done in a few hours. It also helped that people were better prepared and we had almost no onsite building.”

Cube Tech’s creator Forrest King was predictably humble when asked for a comment on his contribution to Cyberpocalypse:

“Make sure to ask Carter’s mom about the cube frame ideas she gave me. If it wasn’t for all the pillow talk I’d have never pitched it to the group.” 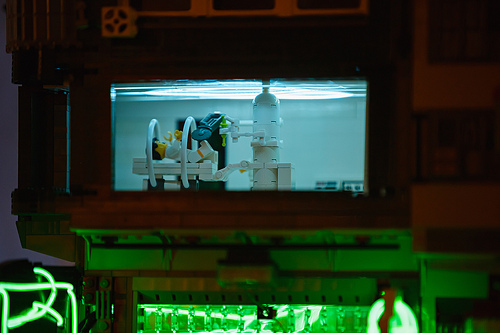 Even in epic-scale dioramas, constant reader, the devil is in the details, and Cyberpocalypse was full of devilish action like this scene of a black-market medical clinic. Any fan of Cyberpunk should be able to identify the key boilerplate of the genre without my assistance.

What I can’t really show you is the…seedier side of the layout. If you’re really interested in the adult aspects of the diorama, just select a link from any of the contributors listed at the end of this posting and enjoy. Indeed many of BroLUG’s activities are not suitable for the sensitive nature of many of our readers and have been omitted from this account. The devil is in the details… 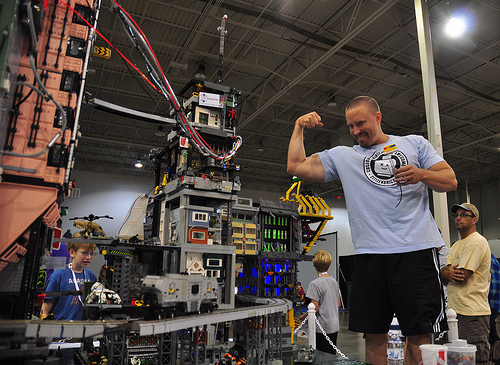 Elder LEGO-nerd statesman and arm-wrestling champion of BroLUG, Kyle Vrieze had this to say about the whole sordid mess.

“For me the choice was simple: post-apocalyptic cyber-city or Judy Garland tribute? We got some fun reactions on public days. One guy came sprinting up to it, yelling back to his kids that he found the thing they saw before on the internet. Another guy walked up and just couldn’t stop telling me how awesome it was, and what a great job we did. That was cool, but before long I wasn’t really able to think of anything to say back to the guy. Several people asked how many parts we used. I knew that each water plate had 1,024 green 1×1 tiles and I think we had about 20 water plates, so that’s over 20,000 parts already, just in the top layer of the baseplates. Beyond that I have no idea, but it’s a lot. We ate through Nate’s hefty tile sack faster than Alex’s Oreos.

The biggest share of the effort was on the part of the big three (Carter, Chris and Nate), but still it wouldn’t have been the same without the cube island. Forest’s modular cube idea allowed for the connected collaboration of the old Moonbase idea to be taken vertical. We knew that you have to go vertical to get maximum impact. (That’s what she said.) Having said that, however, some of the best details are found lower down. (That’s what SHE said.) Chris had some great drain-pipe goo detailing (which he is, of course, famous for) and Alex’s water-level cubes were really gritty. (Grittiness possibly enhanced by the fact that the airline baggage handlers completely mangled his stuff.)” 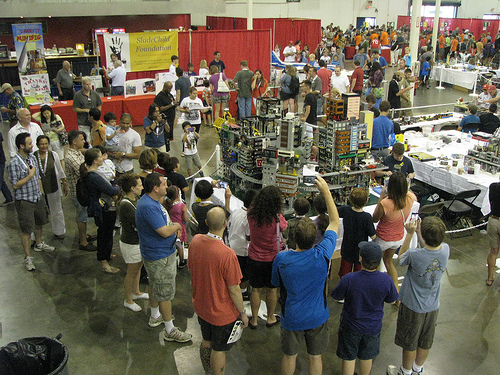 BroLUGger Alex Valentino initially denied permission to be interviewed for this posting, but at the 11th hour offered this statement through his attorney:

“BroLUG may not have won any awards, but we certainly won over a few hearts, and more than our fair share of beer pong games. We commandeered the sound system on Saturday night, and stole the spotlight in Daniel Junge’s documentary (despite overall skepticism and disapproval of how staged his whole production is shaping up to be). We also found out we’re in Kevin Hinkle’s top five things to worry about when/if his boss calls him into his office. Despite this, BroLUG now has a hefty stash of Hinkle minifigures.” 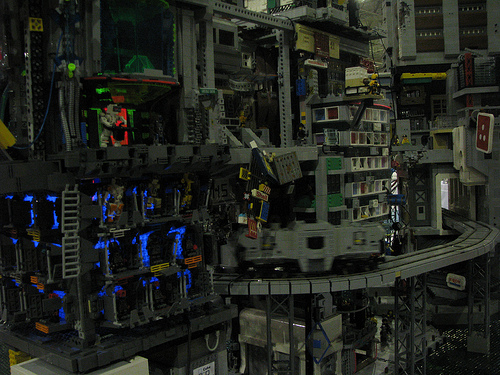 The spiritual lynchpin of Cyberpocalypse 2013, Nate Brill, spilled the beans when interrogated about his role in the BroLUG caper.

“From my perspective a lot of inebriation was involved to make this. A lot. What really makes the display for me is not just the consistent awesomeness throughout, but the depth. Any shot you take of it basically has other buildings lurking in the background.

Also, for the Scala stuff, I pretty much emptied Europe of a few different parts. Like the pink round washing machine doors for the pink building. I bought every last one available, but left the washing machine units so, sorry Euro Bricklink sellers. I wanted there to be colors and parts you never see, to make it harder to realize you’re looking at Lego. I also stole some blankets from Scala babies for awnings and whatnot.” 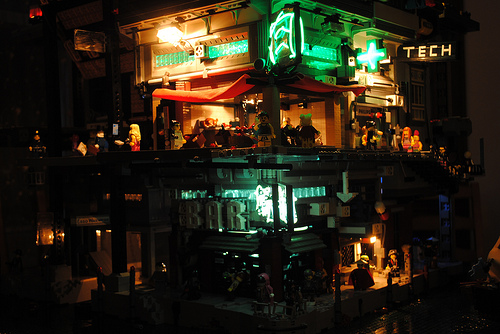 Perhaps International man of action and all around Chatty-Cathy Simon Liu summed up the totality of the Brickfair Virginia experience best:

I hope you enjoyed this extended voyage with the men and madness of Cyberpocalypse, a diorama for the ages. Well done gentlemen…well done.

For those of you who enjoy a video presentation, Joshua and Matthew over at Beyond The Brick TV have some great coverage from Brick World that features many of the wacky gang of characters!

Additional cast for the BrickFair Extravaganza!:

With special guest-star Craig Lavergne, who’s contribution was detained and delayed at the U.S. / Canada border. 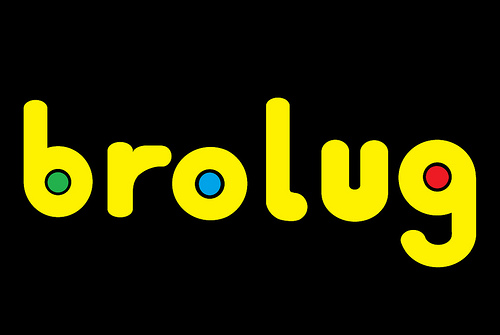 BroLUG has big plans for next year, which will no doubt include their first annual lacrosse game, but for now it’s top secret. They have, however, narrowed down the choices for their official Slogan:

Brolug: “Punishing hotel rooms since 2013” or “Brolug, masters of casually inserting themselves.”