We don’t feature many modular buildings (or Cafe-Corner Compatible buildings, if you prefer) on this blog any more. After a while they all start to look a bit the same. A few weeks ago, however, I attended a Lowlug meeting and saw the very original models by Christiaan de Roo (aloisvonesterhazy), inspired by Amsterdam. My favourite in his collection is a somewhat older model called “Cafe het Hoekje”, which is Dutch and translates to Corner Cafe. It is built in the very attractive style typical of many 19th century buildings in city centres in the Netherlands, reminiscent of 17th century Dutch architecture. 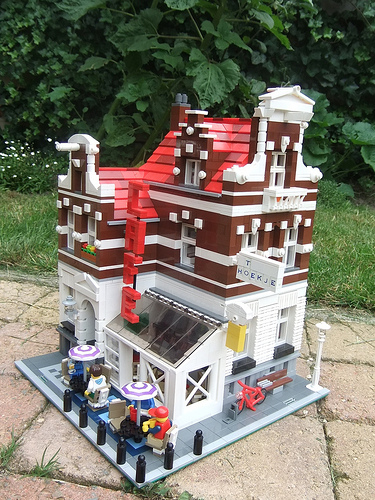 One thing I don’t like about many modular buildings, including some of the sets, is their overly elaborate decoration in too many or odd colours. I prefer a more restrained look and Christiaan got that just right. There is a variation in the colour of the roof tiles, which adds some extra visual interest, but most of the building is plain brown with white accents. The building also has a full interior with some spectacular tile work on the ground floor. You can enjoy it in all its detail by checking out the full set on flickr.

2 comments on “It is a Corner Cafe, but not as you know it”