Galaktek makes great use of the part-separator in his recent model Bad Hare Day. According to the builder, “The Heartlake pets aren’t sure what this “war” thing is (can you eat it?), but they’re eager to help. Betsy Bunny has joined the Heartlake Air Force as an auxiliary in her Recon Skimmer, leaping past enemy lines to gather intelligence. Because of the open cockpit, Betsy has named her craft the Bad Hare Day. I can’t make this stuff up. 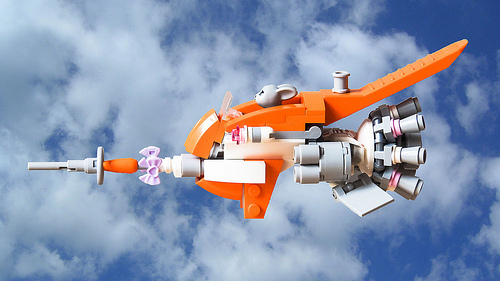 The time went too quickly, constant reader, and we find ourselves at the end of another weekend. Thanks for your continued support of Friday Night Fights and all the models posted over the last 72 hours, your comments make a difference, not only to the fighters but to all the builders whose work is featured on the Brother-Ship. See you next weekend.