Perhaps that’s a bit of an overstatement, but I hope I can be forgiven for suffering from nostalgia. You see, much of my childhood took place in the Eighties and I grew up watching Ghostbusters, The A-Team, The Dukes of Hazzard and Knight Rider, among others. Last year I built the A-Team van, but in the last few months, instead of building new stuff, I have mainly been updating my existing LEGO models. About a month ago, however, seeing Ghostbusters for the umpteenth time inspired me to build something brand-new: Ecto-1. The great response and many suggestions I got from members of the flickr community as well as car models by builders such as Alex Jones (Orion Pax) and Stephan Sander have lead to something of a new theme for me. In the last two weeks I have added K.I.T.T. from Knight Rider and The General Lee from the Dukes of Hazzard to my collection of cars from Eighties movies and TV shows. 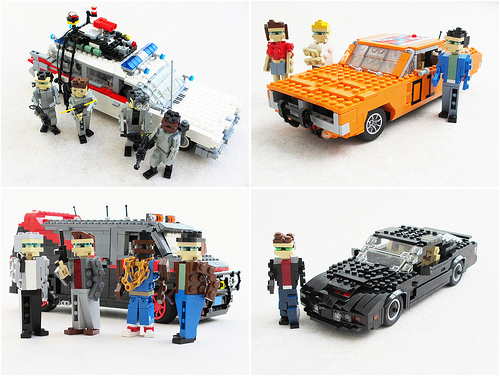 Ghostbusters is still brilliant, but I’m not too nostalgic to realise that much of the acting in the TV shows was a bit rubbish and that their plots were instantly forgettable. The cars used in the shows were definitely memorable, however, and I’m sure I’ll have plenty of fun building some more.