This post isn’t about politics. Well, mostly. On Monday, I expressed some anger about the way Memorial Day has become increasingly trivialized here in the United States, but I didn’t apply the nuance I usually expect from myself, even when writing about the intersection of our LEGO hobby and the real world — of which complex political issues (including my pacifist viewpoint) are most certainly a part. I’ll try to do better as I explore an issue that I think lies a bit closer to home for LEGO fans reading this blog.

Why is it that ethnic minorities are so under-represented in our LEGO depictions of military history — World War II in particular? Why are the LEGO minifigs storming beaches and liberating France presumably all white? Where are the Tuskegee Airmen, the Nisei soldiers, the Filipino sailors, the Navajo Code Talkers, and many more?

I realized recently that I was guilty of this oversight myself, as illustrated amply in the links to my own models above. I’m correcting this today with a rather simple photograph depicting 2nd Lt. Daniel K. Inouye as he marches with his platoon toward the ridge in Tuscany where he would single-handedly take out three German machine gun nests, losing his arm — and earning a Medal of Honor — in the process. 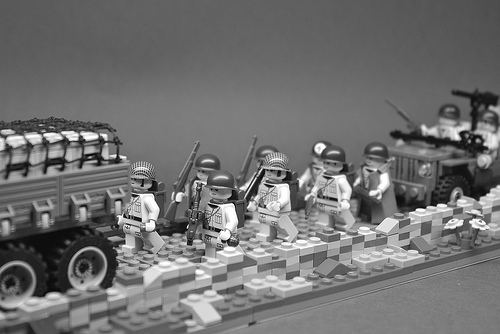 Daniel Inouye went on to become a US Representative and Senator from Hawaii, serving his state from the first day of statehood in 1959 through his death at the end of 2012.

(Frustratingly, I also realized that I don’t have the LEGO landscaping talent to attempt the ridge scene itself. And as an infantry regiment, the 442nd wasn’t equipped with the “interesting” tanks and other armor I’ve been building.)

There are historical reasons that answer my questions, of course. The United States military was officially segregated until after World War II ended, and most non-white units did not serve in front-line combat roles. Thus, the ever-popular and exciting scenes depicting the first moments of D-Day, for example, sadly but accurately exclude minorities like African-Americans and Japanese-Americans.

It’s also challenging to use LEGO as a medium to reflect real-world diversity. With LEGO Friends as a welcome exception — Heartlake City is certainly a multi-ethnic LEGO society — theoretically, only LEGO sets from licensed themes like Star Wars and the Lone Ranger include explicitly non-white characters. Why is it that a person of color has to be in a movie in order to be included accurately in a LEGO set? (Try asking LEGO that the next time you call Customer Service.) LEGO has claimed in the past that yellow minifigs are somehow race-neutral. Rubbish — tell that to a 9-year-old African-American girl wondering why people like her are so grossly under-represented in LEGO minifigs. And yes, LEGO is a Danish company, but that’s no excuse either.

Thanks to LEGO, we builders don’t actually have too many “non-white” minifigs to work with. For my Nisei soldiers of the 442nd, I had to dig up LEGO Ninjas minifigs from the 1990s, along with a few Ninjago minifigs. I shouldn’t need to go to themes with stereotypical ninjas in their name to find Asian minifigs. And for my African-American tank crew from the 761st Tank Battalion (below), my choices were even more restricted. 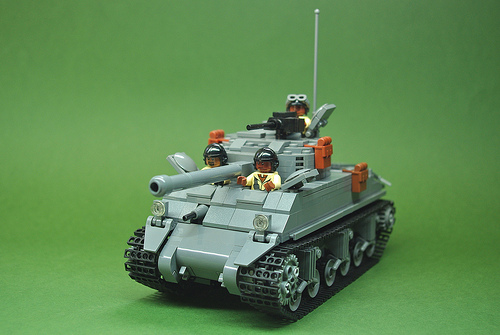 But I can’t give us WW2 LEGO builders a pass for focusing so obsessively on Normandy (with a bit of North Africa or Stalingrad thrown in from time to time) at the expense of the much-larger historical context, which did indeed include people from every thread of the vast tapestry of American society. Nor is the “limited LEGO palette” an excuse. What’s a bit sad about our collective obsession with D-Day is that we’re overlooking heroism and drama that is just as interesting and just as “buildable” in LEGO. By starting with the question “What can I build?” I’ve learned about people and events I’d never have learned in my high school American history classes (and certainly not in the Japanese history classes during elementary school earlier in my life).

Unfortunately, I’ve also encountered darker obsessions among some LEGO World War II builders. I can’t count the number of teens (apparently) who’ve included references to the Third Reich in their Flickr screen names — some going as far as to include the SS lightning bolts or even swastikas. I’ve also seen casual use of dated and hateful terms like “Jap” and “Kraut.” It makes me angry, but it also makes me very sad. Such behavior is unacceptable, and flies in the face of the very values that the Allies fought to defend in World War II. These are the kinds of actions I was alluding to with my “trite hand-wringing about ‘kids these days'” in my Memorial Day post. It’s hard to believe such attitudes toward fellow human beings don’t color what these builders choose to create with LEGO (or how they treat their fellow human beings in real life).

Whatever the reasons, we can and must do better.

The LEGO Military Annual Build Competition is happening now through July 10. With that in mind, I’d like to issue a challenge to those of us who are building something in the numerous contest categories: Build your models and minifigs in ways that reflect the true diversity of the men and women in the armed forces — whether you’re building something historical from World War II, Vietnam, or more-recent conflicts like Iraq and Afghanistan, or whether you’re creating something from an alternate or future timeline.

African-Americans, Japanese-Americans, Filipino-Americans, and other minorities fought racism and prejudice during World War II even as they battled the Axis Powers in the war itself. When they arrived home, they built on that experience to begin the Civil Rights movement, as well as the drive toward Hawaiian statehood and an independent Philippines. Those of us building LEGO creations based on historical conflicts like World War II owe it to the men and women who served to accurately reflect their experience.

46 comments on “The 442nd Regimental Combat Team and Sen. Daniel Inouye in LEGO”