I distinctly remember hearing about the Space Shuttle Challenger exploding in 1986. I was having dinner with my parents and sister, eating grapefruit for dessert, when the news came on the radio. It was a highly publicised flight, even before lift-off, because Christa McAuliffe was on board, as part of the teacher in space project. Before her flight, the Shuttle was the exclusive domain of scientists, engineers and test pilots. The explosion came as a shock, not just in the United States, but also for a then ten-year old boy from the Netherlands, sitting next to the radio. I also have distinct memories of the Columbia disaster in 2003. I had recently moved to a new apartment and had organised a house-warming party for that evening, with my friends (mostly fellow physicists). That evening we could talk about little else.

Both events highlighted problems with NASA’s approach to safety and showed that the Shuttle itself was a deeply flawed concept. Yet, last year’s pictures of NASA’s Boeing 747SCA flying the Shuttles around the US to their resting places at museums, fill me with sadness. Rather than making giant leaps, it feels as though we are slowly crawling backwards. American and European Astronauts are now resigned to flying in the cramped confines of Russian Soyuz capsules, that really aren’t all that different from the capsule that carried Yuri Gagarin into orbit more than 50 years ago.

There is a glimmer of progress though, in the form of the Dragon. Stephen Pakbaz (Apojove) has built a very nice model of this spacecraft, doing a good job of representing the round shape with its conic end. 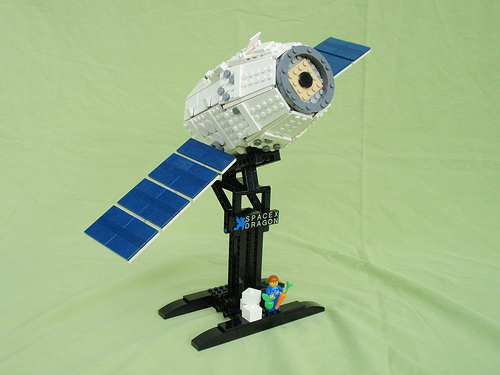 Last week I attended a lecture by André Kuipers, a Dutch astronaut who was on board the International Space Station from December 2011 to July 2012. A Dragon docked with the station during this time, and Kuipers described the new-car smell that greeted the crew when they opened the hatch. It’s not as sexy as the Space Shuttle, but the significance of the Dragon is that it is the first commercially developed space craft intended for manned missions in orbit. Previously this was exclusively done by governments. So far the Dragon has only been used as an unmanned supply vehicle, but it has been developed with manned missions in mind and plans are afoot for a first crewed flight in 2015. It’s a small step, but hopefully, in the non-too-distant future, commercial companies will be cheaply doing the nitty-gritty of lifting stuff and people to orbit, allowing NASA to do the more exciting stuff further out there.

4 comments on “Dragons in orbit?”