Lately I have been updating some of my older models, but seeing Ghostbusters for the umpteenth time last week inspired me to build something new for a change: Ecto-1. It had been on my to-do list for months. 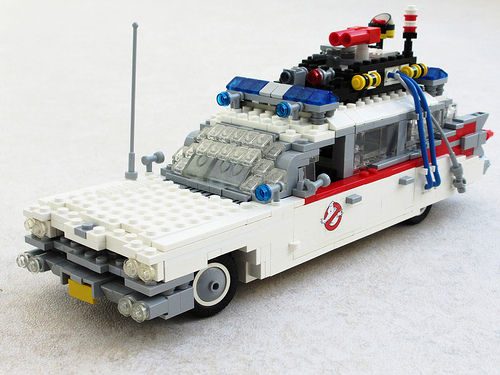 It’s not the first Ecto-1 blogged here: a minifig scale version by misterzumbi and both minifig and large scale versions by Orion Pax have been featured here before, but I wanted my own version.

I decided to build a largish model, so that I could have working features such as steering and opening doors, which is the main thing that sets my model apart from the others. Ecto-1 in the movie was a converted ambulance built on a ’59 Cadillac commercial chassis. My starting point was a pink ’59 Cadillac convertible I built several years ago. That vehicle has a considerably shorter wheelbase and no roof, obviously, but the front end and the iconic tailfins are the same.

A drawback of the larger scale is that it isn’t suited for minifigs, which is why I opted for brick-built figures. Ecto-1 wouldn’t be complete without the Ghostbusters themselves and a “focused, non-terminal repeating phantasm, or a Class Five full roaming vapor”. You’ve got to love (s)lime green!