Much has been written about how mathematicians, who worked at Bletchley Park in the UK, broke the Enigma codes, thereby playing a significant role in defeating Nazi Germany’s U-boats. However, apart from aficionados of computer history or WW-II buffs, few people know about another part played by the scientists and engineers at Bletchley Park. In order to break the so-called Lorentz encryption, used by the German army, the boffins built the Colossus computer. As part of a series of models about British history, James Pegrum (peggyjdb) has built a scene depicting the Colossus Mk.2, as used at Bletchley Park on the eve of the D-Day Normandy landings. 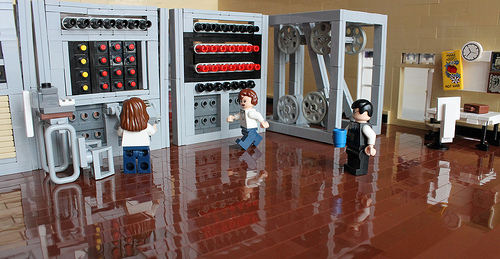 Even though the project remained largely unknown for decades, mainly because it was classified, Colossus is significant as the World’s first programmable digital computer.

Many thanks to Richard Selby for the heads up.