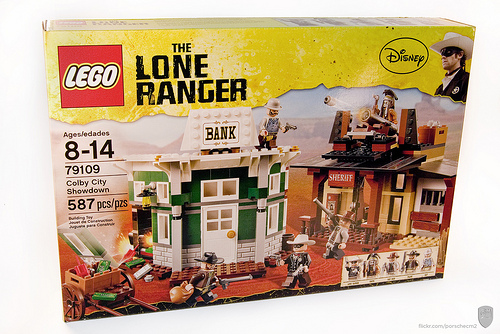 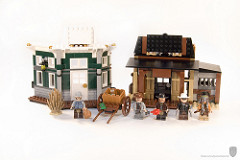 Colby City Showdown is the medium sized-set from the new Lone Ranger line, which is releasing tomorrow in North America and spans seven sets–a very large release for a new IP. Colby City is a small western town play-set, and the location of a dramatic action montage, judging by the play features. $49.99 USD may seem like a lot for two buildings, but with 587 pieces, it comes in well below that vaunted 10 cents-per-piece ratio that fans like to talk about. In fact, even without considering this is a licensed set, (which traditionally cost more per-piece than non-licensed sets) this set is a remarkably good deal.

The box contains four numbered bags, two booklet instruction manuals, a sticker sheet, and a loose 8×16 tan plate. The bags were packed pretty tightly into the box, and I applaud LEGO for their attempts to save 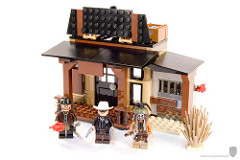 cardboard with new, smaller box sizes. However, this only serves to highlight the necessity of packing the stickers with a stiff piece of cardboard, because again mine were a little worse for the wear. Ultimately, though, I decided not to even apply the stickers in this set, because I didn’t see myself re-using those pieces in my own creations with the stickers applied.

The first two bags build the sheriff’s office, and Tonto, the Lone Ranger, the outlaw Frank, and a shrubbery. I remember my brother having the old Sheriff’s Lock-Up set from the mid-90’s Western theme, and I was pleased to find many of the same fun features in the new Colby City version. The break-apart jail cell was a bit disappointing to me, though. The Sheriff’s Lock-Up cell had a cool little feature where you could insert 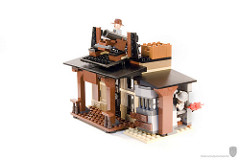 the dynamite (a printed 1×2 tile) into a crack, and it would pop the back of the cell wall off. The new jail cell has a similar feature, but it’s simply lever activated, and you just clip the dynamite (now a molded piece) to the side of the building. On the other hand, the pop-down facade on the roof with a hidden cannon was definitely something the old set didn’t have. I’m not too certain I’d trust a rickety old timber-and-adobe building as an artillery platform, but you have to admit it makes a cool ambush. Like most LEGO buildings, both the sheriff’s office and the bank are facades, open in the back to allow easy access to the interior for play. The sheriff’s office comes equipped with two small tables, a chair, and a rifle rack, that oddly also holds a pair of handcuffs. Oh well, it’s LEGO. 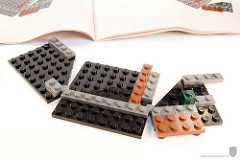 The last two bags build Colby City’s bank, Sheriff Dan Reid, and Ray. This is a really fantastic little building. It’s built on a three-part base connected with hinges, and the design used some clever LEGO math to get the hinges to lock in place. This gives the building a lot more depth than a mere flat facade. The construction of the building reminds me of a miniature, budget version of one of the big modular sets, using lots of small pieces to create detailed walls, instead of resorting to larger prefabricated wall pieces. The interior space is small, of course, but it still manages to fit a teller station, so you can reenact a thrilling hold-up. Sadly, the set doesn’t include a frightened bank teller. I suppose a teller is somewhat unnecessary, though, since the Bank of Colby City has good faith in the local citizens, and therefore places the bank safe out in the lobby so it’s easily accessible to all. It’s a huge safe, too, definitely large enough to fit a minifigure. If walking 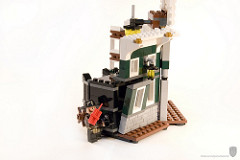 inside the bank to access the safe proves too much effort, though, there’s a handy chunk of the outside wall that blows off directly behind the safe. There’s even a hand-cart included to truck away all your ill-gotten loot, which consists of two bars of silver and three $100 bills, as well as some green pieces to bulk out the stacks of cash.

I think a trade-off was made on this set, between having more buildings, or making the buildings more detailed. While I would have loved to have a longer boardwalk, maybe with a general store or a saloon, I think LEGO 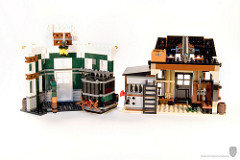 made the right decision paring this set down to the essential two structures, then spending more pieces bulking them up. The set as a whole has a good selection of pieces, with lots of dark green and brown/tan pieces. The five minifigures are terrific. Tonto and the Lone Ranger aren’t unique to this set in anyway, but the other three characters are. These figures have been very well designed, and all of them having printing on the front, rear, and legs, while avoiding using any flesh colored patches around the collar, meaning the translate well to use in yellow-minifigure land. There are three of the new pistols in the set, with two in pearl grey for the Lone Ranger, and another in dark pearl grey for Ray, plus I got an extra of each. If you get the entire line of Lone Ranger sets, you’ll be awash in the new pistols in no time. The new design of the cowboy hat for the Lone Ranger comes in black and white here. 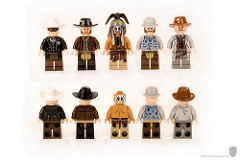 Really the only other piece here that’s new is Tonto’s hatchet. It’s a single mold piece with a two-tone injection, so it’s not painted. The head is slightly rubberized. It reminds me of the tools in the Collectible Minifigure line, and I’m not at all surprised to see that it’s in the series 10 collection.

All in all, it’s a very solid set. It doesn’t strike my fancy as much as the delightfully-oversized Stagecoach Escape did, but this is definitely not a filler set, and it looks ripe for customization by adding your own buildings to make a complete boardwalk. Be sure to read my review of the Stagecoach Escape from last week, if you missed it.

is out now from Amazon.com and the LEGO Shop online.