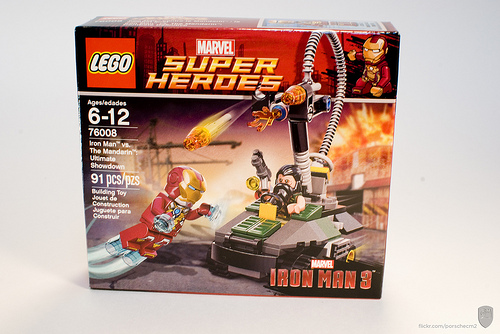 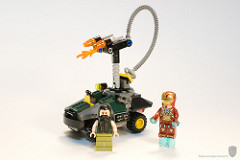 76008 Iron Man vs. The Mandarin: Ultimate Showdown is the smallest set of the trio of LEGO sets for the upcoming Iron Man 3 film. With only a vehicle and two minifigs, it’s clearly an action-based set. The box includes two un-numbered bags, the instructions, and the same 10-page comic as the other Iron Man 3 sets. The comic includes scenes from all three sets, and is really quite nice.

The vehicle seems to be some sort of flame-thrower armored car, and it’s driven by the big-bearded Mandarin, aka Iron Man’s new nemesis. The vehicle is pretty standard, with the flame-thrower stand holding two flick-fire missiles (where would we be without flick-fire missiles? Here’s a challenge: build a creation using only flick-fire missiles!) and being mounted on a 4×4 turntable. The rear of the vehicle does incorporate one of those multifaceted train slopes, which is a nifty under-utilized piece, so that’s cool. Beyond the missiles, though, there are no play-features in this set, so you’ll have to use your imagination. There are a few left-over pieces of the regular sort, and as usual, I’ve included a shot of the inventory page. I suspect

the real reason that most people will buy this set, though, is for the minifigs. Both are exclusive to this set. Although a minifigure of the Mandarin appears in the Malibu Mansion Attack set, and naturally Iron Man is in all the sets, both are unique versions here. This Mandarin has a bedraggled look, with a kerchief covering whatever-that-is on his chest (here’s a picture comparing the versions). In fact, this torso looks terrific for making your own generic guerrilla fighter, since it doesn’t really have anything in the print that specifically ties it to the Mandarin or this theme. The Iron Man minifigure here is the star, though. This is my favorite of all the LEGO versions of Iron Man we’ve seen so far. This Iron Man features awesome blue eyes and a blue power circle on his chest (here’s a comparison photo between the two armor types). 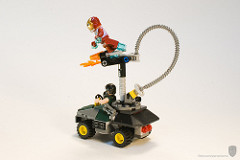 It’s not a great parts pack for those of you who aren’t enamored by the minifigs. On the other hand, a great many of you will thoroughly enjoy the minifigs in this set, and with the set price being so low, it’s probably cheaper to buy the whole set than attempt to buy just the minifigs on the secondary market.