The next set in the Ultimate Collectors Series of LEGO Star Wars sets brings back the X-wing – 10240 Red Five X-wing Starfighter. Due out this May, the set will include 1,558 pieces and retail for $200 here in the States. 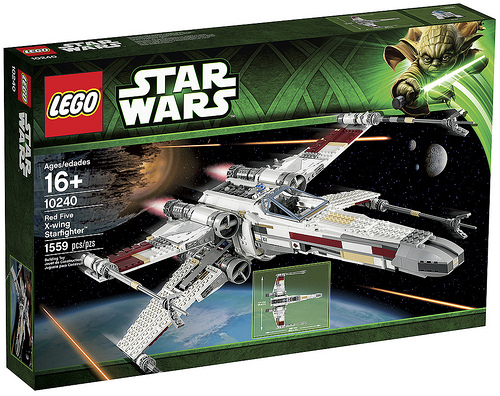 I’ve upload all the official photos to Flickr, and here’s the designer video as well:

Here’s the official info from LEGO:

Collect and create the most highly detailed LEGO® Star Wars™ X-wing Starfighter ever produced. This iconic starfighter is featured in many of the most exciting Star Wars battle scenes, including the decisive battle scene above planet Yavin™. Recreate the moment when Luke Skywalker’s X-wing delivered the proton torpedo that led to the destruction of the Imperial Death Star! With 1,558 pieces, this realistically detailed model features opening wings and cockpit, a special display stand, data sheet label and R2-D2.

Available for sale directly through LEGO® beginning
May 2013

Programming note: Although this info was supposed to go out only after 1 PM PST, one of LEGO’s official channels leaked the story early, so our post is online a few minutes ahead of schedule. FBTB has the amusing tale of the “Worst. Product launch. Ever.”