I found Teenage Mutant Ninja Turtles sets in my local toy store today, which is the first time I’d seen them in person. So, naturally, I picked one up. 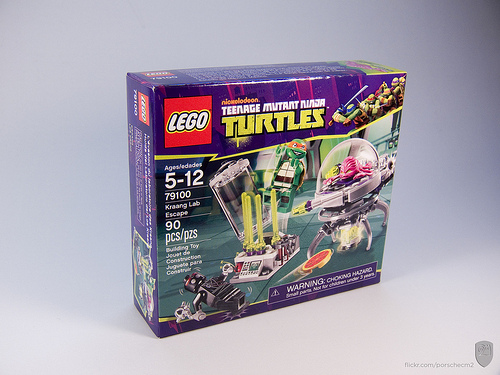 I just nabbed the smallest one for now, because I must confess that I’ve never really watched TMNT. 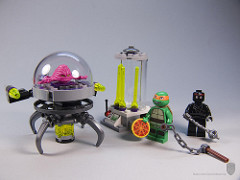 So this review will be purely from the Lego point of view, as I can offer no helpful advice about how closely the sets adhere to the show (also, you should be able to tell that yourself from the official photos).

Kraang’s Escape Lab (79100) has 90 pieces and an MSRP of USD $12.99, which feels about right for a licensed set of this size, and there are no stickers in sight, which is terrific. 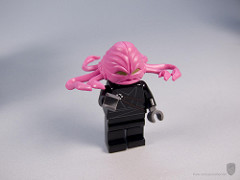 Kraang’s little legged vehicle is a pretty nice build, and feels very playable. The cockpit rotates independently of the legs, and it’s got one of those ubiquitous flick-fire missiles mounted on each side. I do wish canister bit underneath weren’t there, as it touches the ground, even though the legs are perfectly capable of supporting the weight of the vehicle. Inside the cockpit are two flat silver 1×1 round tiles with a marvelous simple dial printing.

Kraang himself is a pretty awesome little alien monster. I was surprised to discover that he’s actually a headpiece, and includes a solid dark pink head inside. He and the head-clinger from Alien Conquest can duel it out for control of your minifigs’ brains. The two minifigs are both good designs, and both include printed backs. The holding cell has a catapult function to break Michelangelo out, which works quite well for its simplicity. I’m excited about Michelangelo’s nun-chucks, because I can always use more short chains and brown tubing. 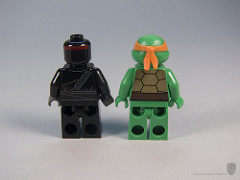 I really wish, though, that the handles were the Bar 3L piece (like a shorter light-sabre blade) instead of a 3-long piece of pneumatic tubing. A neat bonus though was that several of the pieces I found most useful were included as extras. All in all, it’s an average set–nothing here to get too excited about (unless you’re a huge fan of the license), but still competent for what it is.