I’ve seen some wonderful collaborations between talented LEGO builders and photo editors over the years, and though I certainly can’t claim to be either, I included a note in my description of the Aldrin Mars Cycler I posted yesterday saying that I wouldn’t mind if somebody felt like Photoshopping it onto a cool space photo. halfbeak left me a comment offering to help, and we were soon exchanging ideas in email.

I wouldn’t normally post one of my own LEGO models twice, but I’ve learned a few things along the way that I thought I’d share. 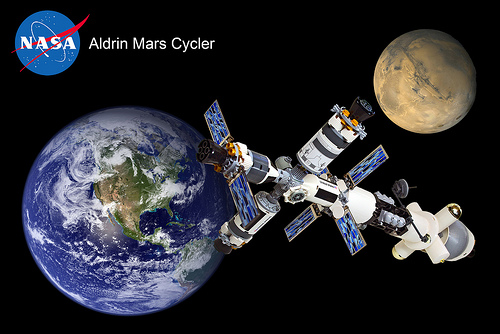 After nearly 10 years of posting my LEGO models online, I find myself pretty locked in to the “Dorling-Kindersley aesthetic” of LEGO photography and presentation — a three-quarters view of the LEGO model on a neutral (usually white) background. (I know Chris has strong opinions about this, too.) Even as I was envisioning something flashier than my unedited photo in my head, it was still basically the same thing, except with Mars in the background. Halfbeak combined views of Earth and Mars with the NASA logo and some text to create something that looks a lot like the publicity photos NASA releases for its missions. Way cool.

I also have a tendency to let the LEGO model take over the whole photo, but halfbeak scaled it down in several of his edits to really emphasize how tiny a human creation is on the cosmic stage. 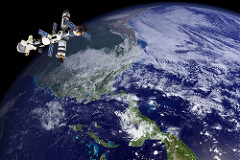 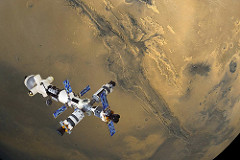 In many of his edits, he changed the orientation of the spacecraft from my original photo, turning it on its side and even upside down — after all, there is no “up” or “down” in space.

One of my favorite edits is this vertically oriented photo, with Mars hanging above the minuscule ship. This one is now the wallpaper on my phone. 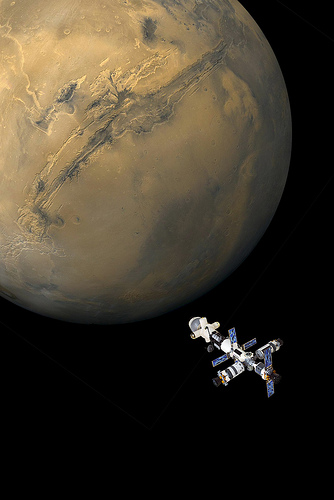 Ultimately, my Aldrin Mars Cycler isn’t necessarily the favorite among the things I’ve built, but these photos demonstrate how stellar presentation can take a fun but fairly middle-of-the-road model to a whole new level. These are now easily my favorite photos of something I’ve built. I’ve also learned to look beyond how I’ve photographed the model in thinking about how best to present it.

Huge thanks to halfbeak for truly awesome work! It’s amazing what variety he’s created from just one original photo.