and my own collection, I built a spaceship to show a use for the new pieces. 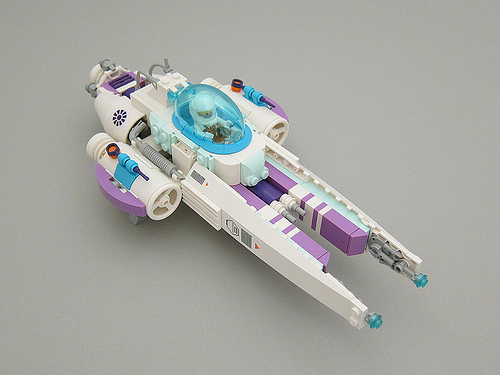 The interesting colors that I found in these sets are medium azure, medium lavender, bright pink, and light aqua (when adjectives are used on colors that don’t come in a Crayola 8-pack, you know it’s a treat for the palette). Although previous LEGO themes for girls included unique colors, they were wasted on useless parts such as large castle turrets and giant facades. Fortunately, LEGO learned from their mistake and concluded that girls are no less competent than boys at using standard LEGO elements. As a result, LEGO Friends includes the usual mix of LEGO parts like bricks, tiles, and cheese slopes in glorious psychedelic colors.

While the new colors are certainly exciting, the same cannot be said for the figures. These anorexic Barbie counterparts may be tolerated by their target audience, but LEGO fans who value the modularity of the traditional minifig will be disappointed to see that only the hairpieces on the new figures are compatible with the minifig. LEGO has proven that they can make excellent female minifigs, and I don’t think fans (both kids and adults) will be disappointed in having regular minifigs in these sets.

If you’re a connoisseur of exotic colors and eager to try new color schemes, then Friends is the best thing to have happened to LEGO in years. Even the price per parts ratio on these sets is decently low and won’t break your wallet. The only question remains on what to do with those dismal doll-things. Reply on what you would do with the Friends figures and The Brothers Brick will send all of mine to the person with the most creative comment. Stay tuned for more reviews of the line.

UPDATE: the winning comment comes from lady_brickster, who says: “well, once i’d taken away their hairstyles, i guess i would create an island of bald amazonian women.”