Nick Jensen finished his most ambitious LEGO Halo project yet of building the Sniper Rifle System 99 Anti-Matériel (commonly known as the Halo sniper rifle) for his arsenal of brick-built Halo weapons. I asked the builder to share the process of making the SR99 from inspiration to the finished model. Here is his response.

The graphics of Halo: Reach blew me away when I first played it. Textures, environments, and character designs all impressed me, but as a LEGO gun builder, I was most impressed with the detail of all the guns. Since then, I built the pistol and combat knife from Halo: Reach. I wanted to build more weapons from Halo: Reach and I was debating between the shotgun and the sniper rifle. I had the parts and money to make one of them. I went with the shotgun but got really frustrated when I couldn’t find a way to make the pump slide back and forth in the front. So I gave up and started the sniper rifle.

I captured many close-up screenshots of the sniper rifle in Halo: Reach’s theater mode, looked up information about the gun on halopedian.com, used the Halo: Reach action figures from McFarlane, and looked at Perry B.’s version as references. I wanted to include as many details as I possibly can squeeze in. I wanted the final MOC to be perfect.

One of the first things I worried about when I decided on building the sniper rifle was the length. It seemed that I would never build something that was going to be 5.5ft long. I thought about the project from another perspective: building the sniper rifle is like building the assault rifle but with a really long barrel. Breaking the project down into three simple parts (body, barrel, and scope) really eased some doubts I had. The sniper rifle in Halo: Reach is approximately 5.5ft long, so a tape measure locked at 5.5ft was always around for reference. I built the body of the sniper the same way I built the assault rifle, SMG, and pistol: Start from the front and build my way to the back. The barrel was easy and I had a plan in mind from the start. I would cover a supporting rod with 2×2 quarter cylinder bricks. So the only difficult tasks were the body and scope.

I did drop the gun once during the WIP stage. I got impatient and wanted to hold it as if it were finished, and it fell to the ground. There was another time later on where the front grip collapsed because of its weight. 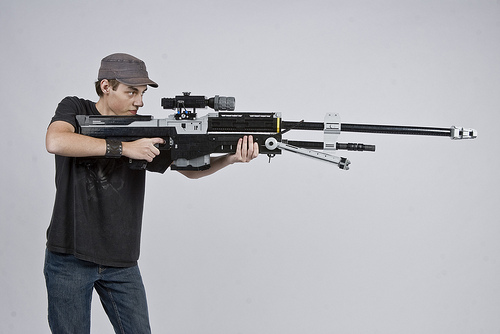