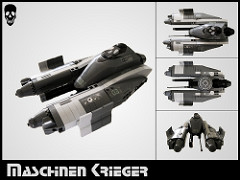 The winners of the Maschinen Krieger (Ma.K.) Starfighter contest have just been announced. In the words of its creator TR Brownbridge (.Tromas),

One last thing…I think I can speak for Tim & Peter when I say this…this was without a doubt the best line up of contest entries that we have ever seen. You have no idea how hard it was for me (us) to narrow it down to a final 10 let alone final 3. Everyone of you should be super proud of your entries!!

Third place went to Mountain King with his Dragonfly 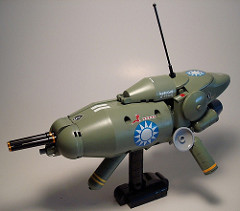 The quality of the entries was absolutely superb. I have to admit I wasn’t expecting many people at all to capture the Ma.K. vibe (as I see it) and was utterly blown away but how many people did, and how well they did it. We really had a a hard time even narrowing down the final entries and picking a winner was a real challenge. Make sure you go to the entry thread to understand why we had such a hard time.

One thing we all agreed on is that John Judy’s (neim343) entry was both amazing and ineligible. While the paint took it up a notch it did breach the rules that no model should be painted, merely parts. But we all felt it needed honourable mention as it wouldn’t look out of place on the winners podium of a ‘real’ Ma.K. contest without being restricted to LEGO.

Finally the “Heart Tile” award for best use of an existing printed LEGO brick had to go to Tyler Clites’ (legohaulic) Höllenhound. The zebra tile was odd yet looked great and was thus a natural winner.