I have only built two hovertanks: one 6 years ago and one today. This post will summarize some of the changes in the way I build and hopefully offer a few useful tips for builders in the process of developing their style (with a focus on sci-fi creations).

The Ladybird Hovertank (above) was one of my first MOCs when I joined the online community in late 2004. It was part of a series of bley sci-fi creations that introduced my works to the internet. Below it is my latest creation called The Chaos Machine; it is a good example of my current and changed building style. 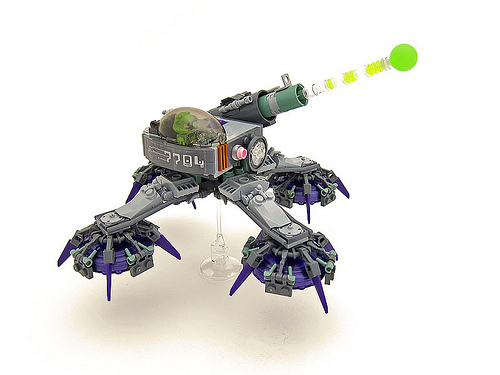 I chose to compare these two MOCs because of their shared subject matter, size, and build time of half a day. That aside, here are the differences:

That said, keep in mind that interpreting a MOC is always a subjective experience. Some may find the Ladybird more appealing while others may find both hovertanks equally enjoyable or repulsive (hopefully not simultaneously). Find what works for you and be open-minded to change.

5 comments on “Then and Now: comparing two hovertanks”