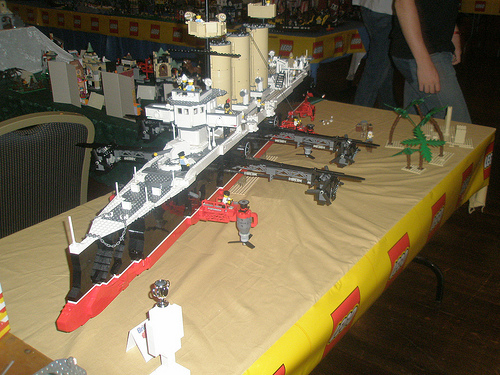 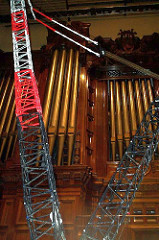 As I mentioned in my last post I spent last weekend (14th to 16th) enjoying myself at Brickvention 2011. This year is was significantly larger than last year with 140 AFOLs attended and 8000 people through the door on public day. In order to deal with an increasing number of attendees (last year there were 3000 through the door) the event had moved to a bigger venue but with a three-fold increase in attendance it simply wasn’t enough. Sadly many people had to wait two hours to get in and some were turned away at the end of the day. The event seems to be approaching the size of some of the smaller European and US fests. 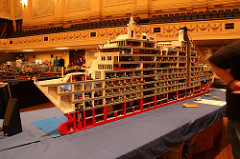 But I suspect our readers aren’t too interested in statistics compared to pictures. After giving attendees a weekend to get their pictures up there are now a bunch of photos up on flickr (check the BV pool and BV 2011 pool or appropriate tags). 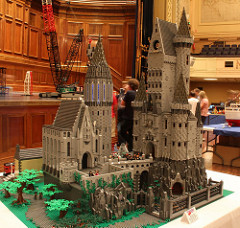 My absolute favourites were the steampunk ship Hyperion (top) by Darren Reid and the Sydney club’s Western display (bottom). Much to my chagrin I spent most of the public days building and didn’t get to see many of the smaller models but I did get a quick moment to wander around and check out the bigger models so can also recommend Ross Crawford‘s crane (right), Kevin Hall‘s Drachenberg castle, Ryan McNaught‘s The Love Boat (left) and Hogwart’s school (left) by David Scalone. But there was numerous other great models around the place. 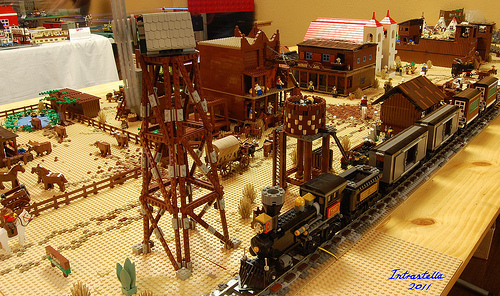 I certainly look forward to Brickvention 2012 whenever and wherever it may be. If you’re in the region this event just gets bigger and better each year so do come along. And many, many, many thanks to the organisers. They put in a lot of effort and ran a very tight ship.