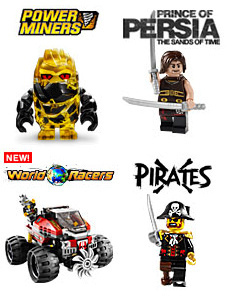 Our LEGO Community Rep. Steve Witt has asked the LEGO Ambassadors to collect suggestions for new LEGO themes. This is your chance to write down some theme ideas and have someone from LEGO read them. So get to it!

To get involved simply 1) think of some theme ideas (no more than three per person), 2) check that your themes don’t already appear and 3) write down any new themes you might have and support any that already appear. I’ll compile some results by the 24th October to submit to Steve.

Additional information 14 Oct 2010: Due to the overwhelming response and difficulty collating the information I’d like people to a) avoid repeating ideas, b) keep their theme ideas as short as possible. As of now I will simply ignore all suggestions by anyone who fails to follow these two simple rules.

209 comments on “LEGO want to hear some new theme ideas”