After I built my US Army Dodge WC54 ambulance, it deserved a proper historical context — a Battalion Aid Station in a ruined farmhouse courtyard. 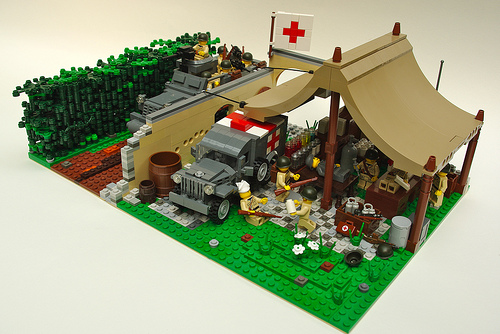 In the US Army, Battalion Aid Stations are the first line of medical treatment after battlefield first aid by medics or fellow soldiers. Wars of the 20th-century saw many conscientious objectors serving as non-combatants in the American armed forces, often as medics. Army medics served heroically, charging into battle alongside their armed comrades. Eleven received the Congressional Medal of Honor as a result of their actions in World War II.

My Battalion Aid Station is based on historical photographs from the Western Front in 1944 and 1945, after the Normandy Invasion on D-Day. Naturally, I had to convert a couple of the more immersive shots into black and white: 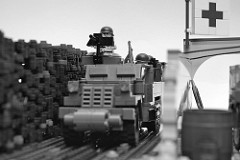 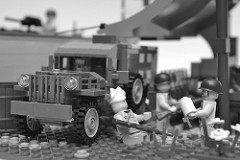 Though the muddy lane with the M3 half-track and hedgerow was an afterthought — one that nearly emptied my bin of plant pieces — I’m quite pleased with the result: 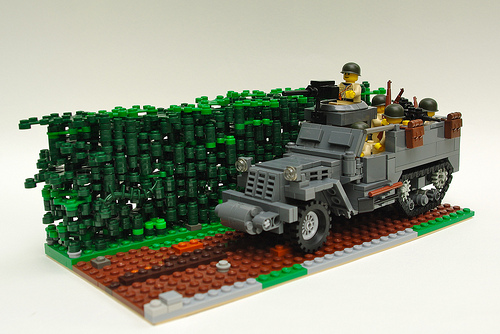 Because the subject matter fascinates me so much, I built a great deal of detail into this that you can’t see in a single photo. Check out the photoset on Flickr for more.

(I’ll be discussing some of the build process for my improved ambulance separately, because I think the role of constructive criticism in improving one’s models is something that deserves its own post.)