We’re nearing double digits in our interviews by Keith Goldman. For our more sensitive readers, today’s interview does contain some fairly strong language. You’ve been warned. Take it away, Keith! 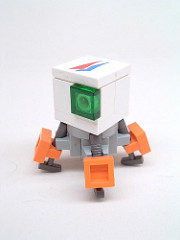 My next guest is a self described “SMOOTH, two-faced, lying bastard” whose models have been the definition of cool in the realm of sci-fi building for the better part of a decade.

I can’t think of a builder who’s been more often imitated than Soren Roberts, and as the cliché goes: never duplicated. Soren is the warrior of the wasteland, the ayatollah of Rock and Rolla!

I’m going to stop because he also has a severe allergy to flattery, daylight, and fools like me.

I sat down with Soren in his blacked-out ’71 cuda, as we prowled early morning downtown Denver Colorado looking for a guy he kept referring to as “That F’ing Girondist”. We talked about Studio Nue, why Snow Crash should never be made into a movie, and whether it is better to use a rusty spoon or a shoe-horn to remove your victim’s eye.

Keith Goldman: Talk to me about the concept of the “Third Artist” and how it applies to building science fiction models with LEGO.  What’s your best advice for somebody who already has a decent grasp of technique, but wants to strive for originality in sci-fi or any other creative genre?

Soren Roberts: The concept of the ‘third artist’ is pretty simple — the first artist makes something original. The second artist copies (or “draws inspiration from”, if you feel charitable) the first. The third artist repeats the work of the second because, hey, that’s what you do. 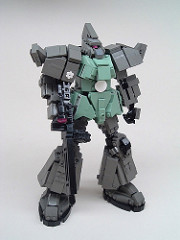 The best advice I can give is to build a clip file of all your influences. Every image you see on the net or in a magazine — if you like it, save it. And it can be anything — I have all kind of pictures of industrial machinery and pressure vessels, but I also have abstract paintings and typography to draw on.

For a while I was drawing a lot of inspiration from early steam warships. And so on.

If you want originality, try to move as close as possible to direct, first-artist inspiration from your surroundings. 99% of science fiction is designed to look like other science fiction, but that one percent stands out and often has a huge, disproportionate influence. It’s really hard to design a future cityscape that doesn’t at least obliquely reference the L.A. skyline of Blade Runner, or worn spaceships that don’t reference Star Wars, because those images were so striking and became so fundamental to our concepts of future cities and spaceships.

KG: You have an art and design background, how does this inform your building?  Also, give me a basic concept or two that you think other builders without your background could practically use to make their building better.

SR: Probably not all that much, beyond the expanded vocabulary — I don’t have a lot of experience in three-dimensional media, so I’m winging it. It informs my color choices, but I’m subject to the same constraints of part availability as anyone else. You can’t really teach a critical eye, just set up the conditions for someone to learn it themselves.

Two of the biggest things I know are how to do the background on someone who inspires me and having a pretty solid process. Being able to dig up more work by someone, or find their inspirations, is tremendously valuable — it lets you pick their brain for ideas remotely. Having a process is just nice for a lot of reasons — speed, certainly, but also for exploring potential alternative designs. I tend to build a lot of details beforehand, and to build several versions of a section I’m stuck on, and pick the version I like. Keeping up the momentum of a build is important. 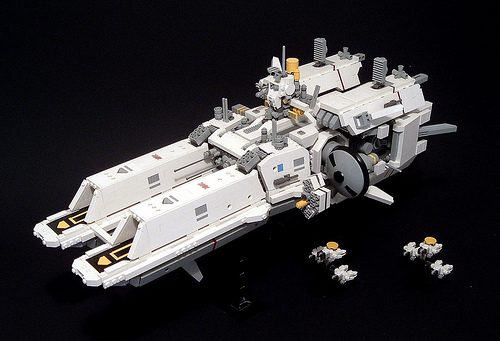 So, yeah. Do the research on your influences, and have a process that minimizes frustration.

More of Keith’s interview with Soren after the jump:

KG: How big of a role does confidence play in your builds?  Do you pretty much build alone, or do you have a crony or two you typically run thing by?  What is the toughest thing about building?

SR: Not much — the vast majority of the time I don’t talk to anyone before I post. I tend to build alone, but if a project is big or complex, I’ll shop it around for opinions.

The toughest? Time constraints can really kill you on something big, but I’d have to say the limited color palette. Nothing sucks like having to reconcile your initial concept with the colors you have on hand.

KG: You have an extensive list of models under your belt.  In fact you’d need a boxer’s heavyweight belt to contain everything.  Why is it you have made so many of your older works unavailable to Johnny Q. Public.  I recently mentioned you in a MOCpages entry about my influences and I was unable to find photos for Skank-Bot, Purple Haze, or the Lying Bastard.

SR: Initially, I just wanted a lower profile. I don’t like the idea of being a reference, and fanboy worship creeps me out when it doesn’t bore me. Plus, there was a lot of sprawl across several sites, and I prefer having just the stuff I like best up on Flickr.

Then I lost a bunch of stuff in a drive crash, and so even if I wanted to put some of it back up, I don’t have those images anymore. It’s irritating, but I did bring it on myself. I suppose the lesson is that the internet is a poor man’s backup.

KG: Give me your best convention anecdote, and if you got their via wheeled vehicle or hitchhiking, your best convention road-trip story.  Wouldn’t you also agree that its time to call a stop to the Dirty Brickster and end the public shame?  What would you like to see take its place?

SR: Can’t really offer anything interesting here, besides saying that I agree Dirty Brickster sounds like something you’d find in the Encyclopedia Of Unusual Sex Practices and that I don’t think nude unicycle jousting has been given a fair shake.

KG: You have enjoyed watching the Internet drama play out over the years as much as I have. What broad trends have you noticed over the years in terms of interpersonal relationships between we monkeys, and what kind of report card would you give yourself in the social arena?

SR: Oooh, now there’s a loaded question or two. Really, answering with anything other than the standard boilerplate about the size and diffusion of the community is asking to get shit on in the comments. I plead the fifth, but I’d say it’s less pressured now that it’s easier to go off and form your own community if you don’t like an existing one. Discussion isn’t limited to a few forums run by a few people, who are often barely capable of moderating themselves.

Report card? I’m definitely no higher than a C+ — a D in my most trollish moments, and I shoot for a B these days. I took giant shits on a lot of people, some of whom deserved it, but plenty of them didn’t. I’m pretty content not to throw down any more, not because I’m any more or less angry, but because it’s not going to change anything.

KG: You have a thing for cutting edge technology, give us three pieces of future-tech that would make for bitchin’ LEGO models.

SR: I think there’s potential in doing at least a segment of a space elevator, either freestanding or with a ground socket/space station terminal.

It would be cool to see more cargo handling, which is getting surprisingly sophisticated. Someone like Pete Reid, who does great hangar bays, could really shine with that subject matter. Throw in a few drunken stevedore minifigs and a hook-monkey, and he might topple you as Sci-Fi diorama king. 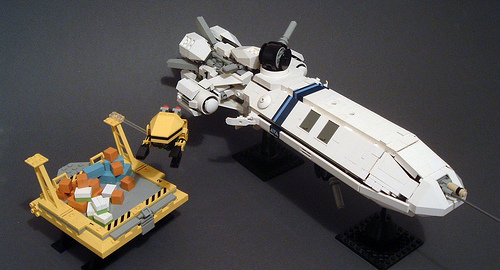 I’d like to see someone tackle terraforming equipment — big arrays of mirrors and solar panels, drill bits and grinders, masses of tubes and hoses and intakes. The new underground theme is neat, but it needs some variety and grime injected into the mix. And I think it has serious diorama potential, since all of these machines have to interact with an environment.

KG: What will LEGO do right in the next 5 years, and what will they screw up royally?

SR: I don’t really have enough of an investment to make interesting commentary on either. I will say the latest round of set designs has been pretty great, but I doubt most of the fan community has sufficiently rational standards to admit that. Sets are parts packs, guys — think of them as collections of useful pieces, and your blood pressure will go way down.

KG: If the Babblefish fish was invented tomorrow, which foreign group or groups of LEGO nerds would you most like to talk to and why?

SR: Yeah, like you didn’t know the answer to that beforehand. I’d like to talk to the Japanese guys, sure, but I’d really like to hear more from Chinese and Korean builders, too. Because the linguistic divide is so great, it’s hard to get a feel for their personalities and styles the way you can, say, the Francophone builders.

And I still secretly think Gla-Gla was actually Shoji Kawamori…

KG: If you had to pick only one of your models to go in the great FOL time-capsule, which would it be? 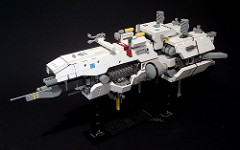 SR: Heh. That sounds like the kind of community project I’d walk slowly away from, if I was even invited. But, since I have to pick, I’d probably chuck this one in — I think it was kind of influential, I’ve still got it together, and it was just really pleasing to build.

KG: If you had to pick only one of my models to go into the great FOL time-capsule, which would it be?

This is probably my favorite of yours — it’s got a lot of vertical depth, several tiers that all work pretty well together.

SR: Andrew Lee and Tim Gould. It’d be a race to see if we passed out drunk or finished the project first.

KG: What’s your favorite comment or review you’ve ever received on a model?

SR: Mmm, I’ve had some funny ones. Hard to choose.

SR: I DO MOTHER FUCKERS.

You were warned. Also, a brief parenthetical aside was removed from one of Soren’s responses at the request of the person mentioned in that aside, with the consent of both Keith and Soren.

13 comments on “Soren Roberts: I don’t like the idea of being a reference – Boilerplate & Beyond Vol. 9 [Interview]”