Brothers-Brick.com turned three a couple days ago, and as our regular readers will have noticed over the last 24 hours, solid growth has resulted in a few new growing pains (thankfully since resolved). We appreciate all of you who’ve stuck with us over the years, and stay tuned for more great LEGO creations and LEGO news in 2010!

I hereby dedicate this post to all you stat-monkeys out there.

(Implementing our Terms of Service and requiring registration back in January 2009 have had a clear effect on the number of comments — both spam and friendly — that posts received in 2009. We’ll evaluate whether the significant drop in discussion was worth it and revisit that decision in the coming weeks.)

There are Brothers-Brick.com readers in 207 countries and regions around the world: 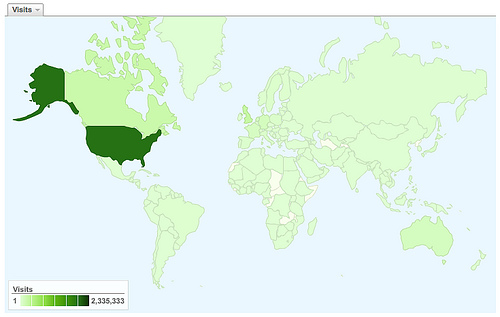 As we’d hoped, we’ve added half a dozen or so readers in central Africa, including the Democratic Republic of the Congo. Still no North Korea or Turkmenistan…

Like 2008, nearly all of our most popular posts in the past year have been news items (driven mainly by search engine traffic):

Finally, here are some links to historical posts: