Zombie Apocafest 2009 has come and gone. The undead have been blown up, shot up, and mulched to oblivion. The humans stand victorious among the ruins of their civilization. Fortunately, that civilization was, by good fortune, built from LEGO, and it can be rebuilt, brick by little plastic brick. 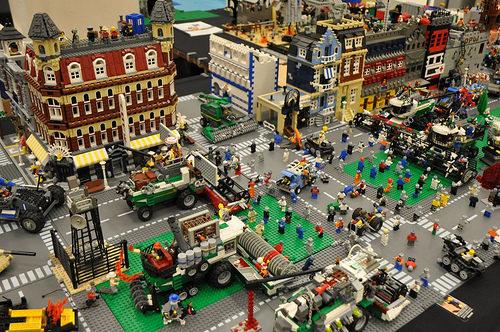 Check out the full gallery of Zombie Apocafest 2009 photos in Thanel’s photostream on Flickr.

The display this year was more than double the size of last year’s, with 17 tables covered in all manner of buildings and vehicles, ranging from little mini-tanks to a fig-scale tanker. Once again, we had the organizational genius of LEGOLAND Master Model Maker Gary McIntire laying out the city, with major contributions from other LEGOLAND staffers, including Ryan Wood (Port ChiefLUG) and Joel Baker (awesome zombie head).

As announced before BrickCon, we had four prize categories. Here are the winners:

A huge “Thank you!” to BrickArms for their awesome contributor’s weapons packs, and to Valve for a batch of wicked Left 4 Dead 2 T-shirts!

So, how do these things work? What does it take to pull together a collaborative LEGO layout that covers a couple hundred square feet of display space? What have we learned after running a display at a LEGO convention for two years? Off we go…

It’s not as easy as it looks

Despite my rather chirpy online persona, I have a subversive streak a mile wide. This manifests itself in my political vignettes and the occasional snarky comment. Before BrickCon 2008, a large-scale collaborative display of undead LEGO minifigs overrunning a Cafe Corner city, built by the adults who read The Brothers Brick, seemed like a reasonably subversive idea. I think last year’s display worked so well because that’s precisely what it was.

As cool as I think this year’s display turned out to be, it was a little spread out, and it was rather heavy on the small vehicles with spikes and ladders. The world really needs to be a nicer place than the purely ironic perspective some espouse, but really, some measure of self-referential irony would’ve been welcome.

I’m not a parent, and I don’t judge others’ parenting styles (okay, I do, but only a little bit). But it’s hard for me to imagine encouraging interest in the hyper-violent world of flesh-eating zombies and brain-smashing survivors. The subversive and ironic aspects of a zombie apocalypse built out of LEGO are likely lost on the 11-14 set.

A good idea is better than free stuff

Let’s be honest: The kiddies like the BrickArms, and will do just about anything for prototypes.

We’re big fans of the high-quality custom accessories produced by Will Chapman and his team, and can’t believe how generous they are. Will donated 35 packs of weapons for contributors, including hand-produced cricket bats at our request. Wow.

Nevertheless, we’ve all seen the “wil U trad wit me? kthxby” mentality on display in recent months, and I have to admit that the display this year seemed to attract a bit more interest from the 11-14 set than I’d anticipated.

In fact, there were at least two kids who leaned over the barricades during the public hours, asked to put one minifig on the display and asked for a contributor’s pack. Seriously, kids? The answer to both questions was — and will remain — a firm “No.” (I did let them take a picture of their figs on the display. I’m not a total jerk.)

Overall, I’m happy about how things went with Zombie Apocafest 2009, but it will be the last Zombie Apocafest, and I don’t plan for us to repeat themes from year to year. I’m even happier to report that we’re changing things up for next year. We’ve run our BrickCon 2010 display idea by a few attendees, and we’ll be announcing next year’s theme shortly. Plans are already underway…