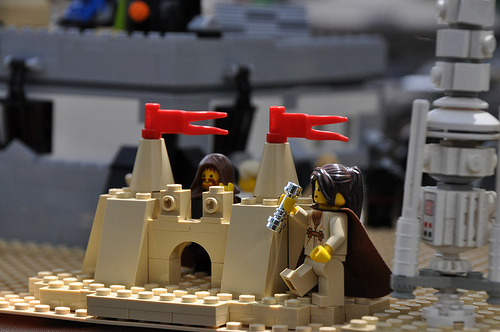 For those of you who read Lugging pt. 1 or have been interested in finding a LEGO user group (LUG) for some time, this is my effort to help you find a LUG. At a recent event at LEGOLAND California where my LUG (SandLUG) hosted a display, a lot of visitors from the rest of the country and world had questions about how to find LUGs in their home towns. I was pleasantly surprised by all the interest, though I wish I’d been able to provide lugging first aid.

I was lucky enough to have my brother, Andrew, refer me to my local LUG that included people he knew personally. They knew to expect me and my path was smoothed by his sheer nerd fame. I cheated. My brother told me he was sick of me just making comments on TBB and that I needed to start DOING something. For those of you who were not so lucky, I’ve done some research.

At first, I tried compiling a list of LUGs by region and interest, but it just got ridiculously long, which is a very, very good thing. If I could find dozens, you can hopefully find one in your area. Remember though, even if you find a LUG, some cover huge swaths of territory (e.g. TexLUG, TurkLUG, Brickish Association) some are inactive, and others may be essentially an online-only group. Though to the credit of many of the online groups, they’re quite creative and active.

One of the challenges of finding LUGs is that they are based on multiple platforms. Some are basically just an e-mail list that the members have stashed away somewhere, some are discussion threads or groups within LEGO communities like LUGnet, some operate within larger online networking sites like Google, flickr, MySpace or facebook, and still others host their own sophisticated websites. Some groups have members and groups on multiple platforms, but use a single platform for group-wide discussions or announcements.

A good place to start is the right-hand column on this very site, which has scores of communities and resources listed, including several LUGs. Look through them. See if anything looks familiar. If nothing pops out at you there, go to LUGnet, Eurobricks, MOCpages, Brickshelf or any of the other LEGO-specific “umbrella” sites and browse for a forum, topic, discussion or group that relates to you. LUGnet also has a map (though slightly out of date) that has pins showing the locations of different kinds of LEGO clubs throughout the world, with links to those clubs/LUGs.

If this doesn’t work, I’d search for groups on the non-LEGO networking sites listed above.

Probably the easiest (you’ll inevitably get some junk) is typing “lug lego” or “lego user group” into any old search engine. If you want to get super-fancy, type in a city, region, state, province, country or interest as well (though not all), which may narrow your results. Avoid just typing “lug,” it’s too common a word and apparently entering “lug” and a German city name could also result in some fairly interesting, but non-LEGO related hits.

If you’re looking for something that relates to a specific interest area, like Star Trek or trains, change your search accordingly. Most train groups are called LEGO train clubs (LTCs), though that varies too. In some parts of the world, LTCs outnumber general LUGs. Other specialized LUGs will use a word or two to hint at their interest, such as TrekLUG.

If none of the above work and you’re up to some serious sleuthing/stalking, look for hints on other users’ profiles, postings or other things that might indicate that they’re near you, then drop them a quick message asking for guidance finding a LUG, but try not to pester.

TBB has a fairly large readership, so questions about LUGs are more than welcome and there’s a good chance one of our other readers or contributors will have an answer. I also have a discussion thread in the flickr LEGO group that’s dealing with lugging issues.

Remember, some LUGs don’t have meetings and are mainly internet based, so if you’re thirsting for face to face contact, you may not be quenched at the end of the day. Also, some areas just don’t seem to have active general LUGs, like shockingly enough Chicago and New York City (CLB and NYCLUG don’t appear to be active, though I’d be happy to be disabused of the notion). That will be part 4 of the series, how to start or revive a LUG.