A couple of months ago, Andrew Lee (onosendai2600) challenged TBB’s own Nannan Zhang (Nannan) to a building contest.

This was to be an epic challenge of skill, with only two limitations. The first limitation was the deadline, which was the end of April. The second, each builder had to use all of the parts supplied and chosen by a third party.

Derek Schin (dbol39) volunteered to provide the mystery part, and sent each builder EIGHT of the printed radar dishes from the UCS Millennium Falcon. A panel of judges was selected, and the guys were off to the build-tables. 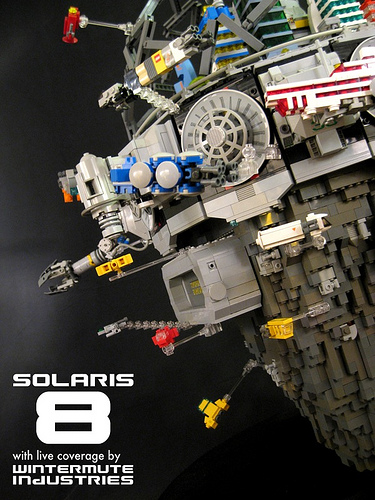 Each builder has now unveiled their creation. Epic is certainly the name of the game with these guys. It’s also remarkable how similar the uses that each builder made of the mystery part are. Both efforts have both pros and cons, and I don’t envy the judges their decision.

Nannan put together a battle (above) involving a massive flying saucer, several small saucers, and a huge-nosed mecha. I appreciate the effort he put in to illustrating an instant caught in time. The energy beam blasting a hole through through the mecha is really cool, although I hate the way the beam abruptly ends. I’m a bit confused by the tile floor at what looks like an out-door facility. It’s amazing what a couple of talented and dedicated builders can manage to put together in a couple of months.

Meanwhile, Andrew built a bustling asteroid spaceport/city. I can’t help but appreciate that there’s a building in the city dedicated to a theme of my own creation. I’m also generally a big fan of bases built into asteroids. I do wish that there was a bit more detail in some of the buildings and space ships, though. 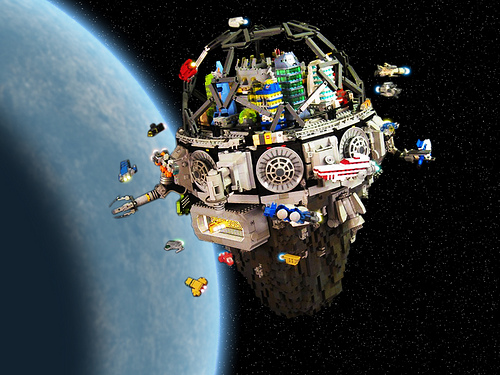 Click through either of Andrew’s photos to see more on Flickr. Nannan assures us he’ll be posting a full gallery and write-up once he’s through final exams later this week.