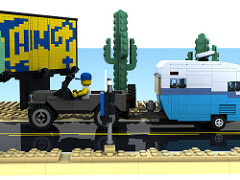 Today we feature a guest editorial by Matt Wagner on virtual building. As some of you may have noticed I share a lot of these thoughts with Matt and find the prejudice against LDraw to be quite thoughtfree.

Anyway, I’ll pass you over to Matt.

Thanks to Andrew and Tim for the chance to share some of what I know about LDraw. First off, I want to make it clear that by no means do I represent the entire LDraw community; I’m only one of many virtual LEGO builders out there.

I hope I’ve helped broaden your views on LDraw and virtual LEGO in general, and hopefully I’ve dispelled some of the misconceptions that cause virtual entries to be prohibited from competing in LEGO contests.

13 comments on “Five things you may not know about LDraw: Guest editorial by Matt Wagner”