As said in the introduction, we are looking at LEGO models as a communicational message. This means putting MOCs (My Own Creation – LEGO custom models, remember?) on the same level as writing an article in a magazine, talking to Santa Claus, or creating a serious work of art. LEGO is just another medium. But what does that definition bring?

Well, all of these activities are done in a context. They play on a field with a set of obstacles they must overcome, and how well they do that determines if the idea behind the message is successfully delivered or not. Determining which these obstacles are will affect your choice of tools (which we will discuss later in the series).

A friend of mine once told me that “In order to say something, you have to have something to say”. It’s one of those phrases that are instantly quotable, and there’s actually much wisdom in this: you cannot express your thoughts if you do not know what you think. It’s highly likely that the Arvo brothers made pretty good research before building that awesome Alien sculpture. 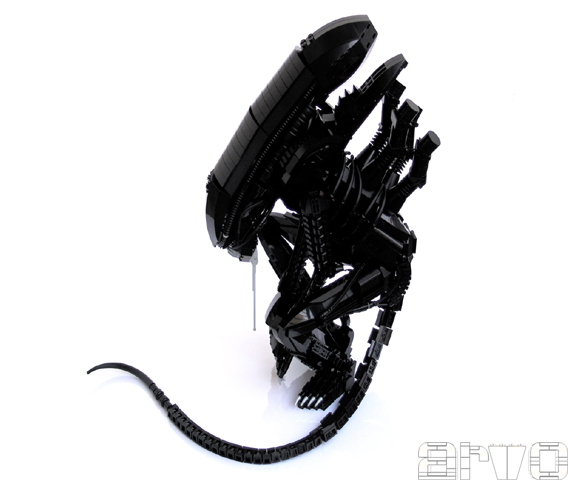 There are conventions here, which we’ll illustrate with a farfetched scenario. Imagine that the Arvos didn’t create this sculpture. Imagine that they named their headphones “H.R. Giger’s Alien” (which they absolutely could, in theory). Would it be a smart move?

While it would’ve provoked a reaction, the sculpture wouldn’t make a lasting impression on us, the audience. It would’ve clashed with the general consensus too much. If we saw the headphones (and assuming we had seen the movie as well), we simply wouldn’t agree that the Alien looked like that: we wouldn’t take it to heart because the Arvos strayed too far from our perception of the real deal. (And considering how geeky many of us in the community are, that would’ve been instant legocide. Assuming the Arvos care about that sort of stuff.)

It’s one of those tricky things to balance: artistic vision versus general consensus. After all, a MOC can in theory look like whatever and be named whatever, but if one labels a model as an ‘old-school pirate ship’, the viewers will expect it to be made of wood, sail on waters and be commanded by bearded drunk men who say “Yarrr”. If the old-school pirate ship is tall and square with cubes of warm ice in it, consider labelling it ‘building’. Same goes for exploring steampunk or how to best build a certain loco.

Point in case: know that you’re starting to communicate already when you decide what to build. People like labels, it lets them understand what is going on.

Next week we’ll have a look at the people you want to talk to – the audience.

12 comments on “Lego is communication: context”