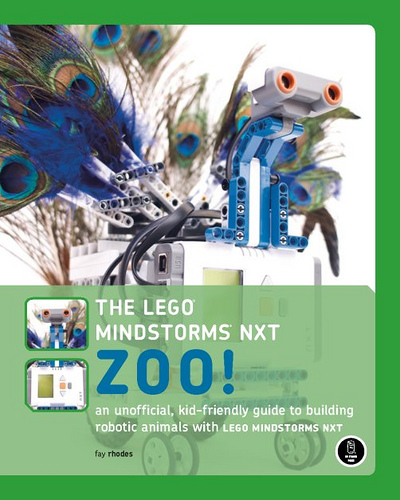 set for my birthday (my wife is awesome!) so naturally I was excited to get the chance to review the newest Mindstorms book from No Starch Press. The author, Fay Rhodes co-authored the The Lego Mindstorms NXT Idea Book, is a member of MCP (Mindstorms Community Partners), and a contributor on the blog The NXT STEP.

The LEGO MINDSTORMS NXT ZOO! is a departure from previous books on LEGO’s robotics system. According to the book’s preface, the author intended this book for people who were not familiar with the NXT system, namely children, parents, teachers, and others new to NXT.

Her intent was to write a book that would be a simple and fun introduction to the system, while at the same time enabling the builder to construct some truly unusual robots.

First of all, I was impressed with the simplicity of the book. I own a couple of other NXT books and they start with complex chapters on programming. Fay Rhodes takes a different approach. She starts off with a very brief introduction into the programming language (6 pages versus 30+ in other books) and then she dives into actually constructing the robots. I think this is a great change, as people who are new to NXT want to start building robots immediately.

The instructions are easy to follow and each one starts off with a pictorial parts list. I did have one problem with the instructions. It is difficult to tell the difference between friction pins and regular ones. This could cause potential problems, but I was able to figure it out without too much trouble. Also, it would have been nice if the instructions were in color, but I’m sure that would have driven the cost up too much.

Regarding the robots themselves, they are quite unusual. As the name of the book implies, all the bots are animals. There are a total of nine — a frog, rabbit, camel, spider, alligator, dinosaur, elephant, skunk, and a peacock. Of these nine robots, only two (the skunk and peacock) travel on wheels. The remaining seven robots either hop or walk and the skunk has a surprise projectile weapon system! But my personal favorite is the spider. Who can’t love a robot that walks on eight legs?

The techniques for walking and hopping are surprisingly simple and aren’t horribly parts intensive. I don’t have a huge collection of Technic pieces and I was able to build most of these with fairly minor parts substitutions. The peacock and ‘gator suffered the most, as I was rather low on important pieces, but I built the other robots quite easily.

A number of the robots do require non-LEGO pieces, which may annoy LEGO purists, but I understand that many NXT builders do this. Most of the uses I understood (fishing line and such), but one of the non-LEGO pieces in the two hopping robots confused me, because there was a LEGO solution readily available. Rhodes suggests using “rubber fingertips” from an office supply store as ends on the legs. These keep the robot from sliding as it prepares to hop. But there are rubber Technic pieces that can be attached to the leg, which have the same effect. Oddly enough, these pieces come in the NXT set. I used them and they worked fine. 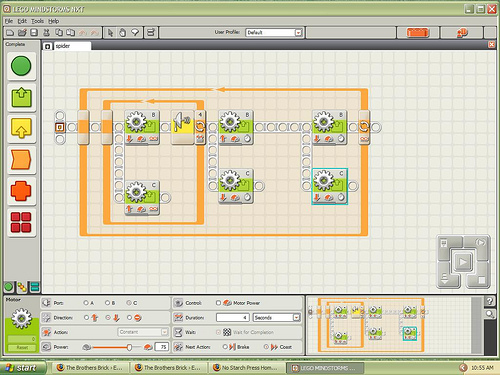 After the instructions for each robot, Rhodes includes several pages of programming instructions. These mostly consist of screenshots, which are quite helpful. This way, you can see exactly how the configuration screens should look at each step. All you should have to do is follow the instructions, and the robots function as intended. These screen shots really take the intimidation factor out of learning a new programming language.

I did find a couple of typos in the programming sections, which could have messed up functionality. They were easily fixed, but you should be aware that the programs might not be perfect. These included a sensor that was plugged into the wrong port (instructions said port 4, but the program used port 2) and a motor that ran the opposite direction. These didn’t stop the robots from operating; some just didn’t work as intended. So, by following the programming steps exactly, you will still get a robot that runs.

Overall, I would recommend LEGO MINDSTORMS NXT ZOO! for any NXT builder. I didn’t expect that it would be written “down” enough for a beginner. But the robots are simple to build, the instructions are easy to follow, the programs are quick to write and they work.

So, if you’re just getting into NXT this would a good book to get you started. But if you have been involved in NXT for while, don’t be put off by the simplicity of this book. It has some rather unconventional techniques that end up building some really intriguing bots. Anyone can learn from this book.