There’s been more than a bit of speculation about the upcoming fan-designed Space sets (a couple more pictures), so I asked Chris Giddens and Mark Sandlin a few questions.

Andrew Becraft: Let’s get the easy questions out of the way. Are the two of you the fans behind the designs for the forthcoming Star Justice and Space Skulls sets?

Chris Giddens: Yes. I did the Star Justice set, and Mark did the Space Skulls.

Mark Sandlin: It’s been confirmed on articles in Brickjournal and Gizmodo.

Andrew: How much does each set cost and how many pieces are in each? 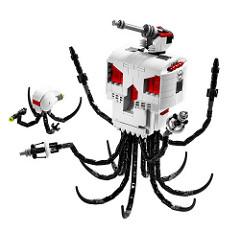 Andrew: Fans have noticed the clear similarities between “Star Justice” and Chris’ Pre-Classic Space (PCS) sub-theme, and between “Space Skulls” and Mark’s 3vil sub-theme. Now that we know you designed these sets, can you explain why they just aren’t called PCS and 3vil?

Chris: PCS meaning Pre Classic Space doesn’t have a whole lot of meaning to the general public. That and 3vil are kinda AFOL stuff that we get, but doesn’t easily communicate what it is on the box.

Andrew: Can each of you describe some of the highlights of the sets you designed? What’s your favorite feature?

Mark: I don’t really have one single favorite feature, but we both tried to put playability into the sets. We wanted to make sets that were fun to play with, not just a pretty model that sits on the shelf. 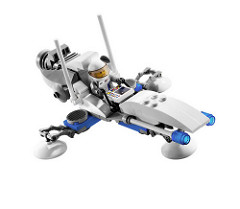 Chris: The Star Justice set was designed to give a Classic Space building experience. Base, Ship, Rover, Scooter, Robots, and Energy Collection. There are simple play features, rotating radars, rockets, opening cockpits, and the like. Each part is reminiscent of a Classic Space era set, but updated with today’s parts. I’m fond of the Cosmic Peace Keeper ship, it’s fun and whooshy (that’s a technical term… sorry for the confusion). Oh and I like shooting skulls. They’re bad.

Andrew: How closely did you work with LEGO set designers to finalize your initial designs?

Mark: There was a LEGO designer on staff who reviewed our sets to ensure that they met build standards and weren’t fragile. Fortunately LEGO put a priority on preserving our designs, so what you see is little changed from the original designs.

Chris: We had 2 different LEGO designers build and review our sets. The second designer had been with the company since the 80’s and had worked on Classic lines of space. He actually finalized our models.

Andrew: When did you start working on this? How long did this process take from start to finish?

Chris: The idea was mentioned to us sometime in 2006. Paal Smith Meyer and others from LEGO were kicking around the idea of doing playthemes in factory. Minifig based sets. January 2007 was about the time it was “official” that we were doing space and we began looking at pieces for our palette. We started building concepts through March and April. Initial plans had this set coming out much earlier.

LEGO doesn’t produce every part in every color all the time. Each year, there is a palette of parts that are produced in certain colors, and we have to work within that. 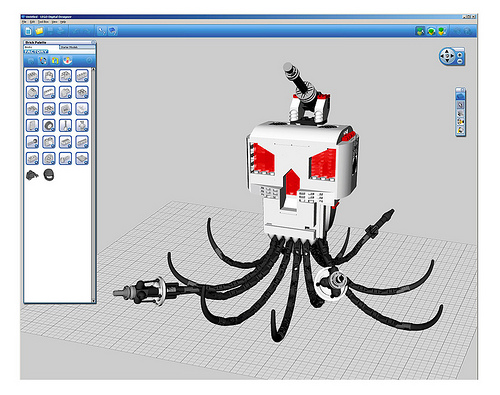 Once we had a palette worked out with LEGO, we hand-built our models at home because LEGO was still preparing the LDD palette. Once the palette was ready within the LDD program, we rebuilt our models in LDD and sent them to LEGO. The models were reviewed by the LEGO designer, and our sets were finalized in summer 2007.

Andrew: Okay, I’ll bite the bullet and ask the question everyone seems to be asking. Why are there stickers in the sets instead of printed pieces — especially the minifig torsos?

Chris: Printing parts is expensive. If you print a part that’s going only in one line of sets, you can’t spread that cost out because of it’s limited production. We hope the space sets sell a buhjillion copies… but factory sets usually are limited runs. We had the choice of either blank torsos or do stickers. Stickers were the best option. We talked to LEGO about these issues and they agreed that stickers were the way to go. We would use stickers IF: A) we could make them B) They would be on transparent film so they could be used in other applications other than our sets C) we get enough color to make them look cool and D) they would be a part available somehow on LDD or factory so kids who can’t afford our set can still get in on the action by building a small LDD ship and adding stickers. LEGO talked internally about this for a while and made it happen.

Mark and I sketched out some ideas and his mad Illustrator skills whipped em out and there ya go. The minifig torso is very expensive to produce… and you add printing it’s even more. If you note, they stopped putting the noggins on the minifigs.. to try and cut some production cost. 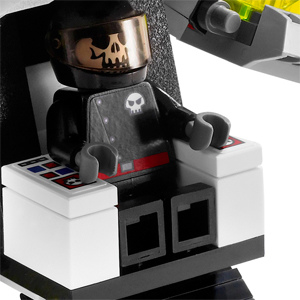 We were given the option of using printed parts that existed in LDD, like the 2×2 computer slope that appears in a couple of our sets, or any existing printed minifigs in LDD, like the plaid shirt torso, or maybe a torso with dungarees printed on — not very spacey. Or we would have been stuck with blank minifig torsos, which would’ve been pretty boring.

LEGO also said that we could have stickers, and we could help design them. In an effort to get some more classic space style in our sets, we decided to go with the stickers. Chris and I sketched up some ideas, and I rendered them in Adobe Illustrator. We sent the designs to LEGO, and they made the stickers that will be in the sets.

I know a lot of people are disappointed by this. We would have liked to have our designs printed onto the minifigs, for sure. Unique printed parts were not an option. We did the best we could under the circumstances.

Andrew: What other constraints were you working within during the design process?

Mark: Even though LEGO offered us the ability to choose a few parts, the LDD palette is still very limited. I sometimes would encounter “gaps” in the basic brick, like certain sizes of plates or bricks in the colors I needed.

Chris: That became even more limiting as we went through the process… 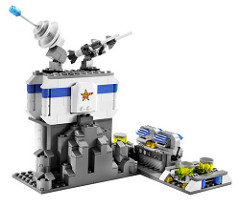 The release date being pushed back had some parts removed from our palette causing some redesign in the Justice set (fairly heavy redesign). Not all parts that are “specifically spacey” are ones LEGO sees as a mass production/bulk brick, so there were limits on what we could build. Also, LDD doesn’t like some connections we AFOLs like.

Andrew: Will you be designing other sets for LEGO?

Chris: No idea. If they call I would certainly give it some thought!

Mark: We have not been asked to make more sets at this time.

Andrew: Have they given you job offers as set designers? Would you take it if they offered you a position?

Chris: No, no offers. I’d take a position if I could stay here and work from home. The commute to Denmark is killer. Mark and I have wives, (and I have a kiddo too), I don’t think uprooting to Europe is in the cards, but we haven’t come close to an offer.

Mark: No, there haven’t been job offers. Personally, I don’t think I would accept an offer like that at this stage of my life, because it would mean moving to Denmark. I’m married and mid-career as a graphic designer, so it wouldn’t really make sense for me to do so. However, if I were a single guy just out of college, I’d definitely consider it.

Edit: Oops! Forgot to link to a podcast interview with Chris and Mark as well, by Tom McDonald: