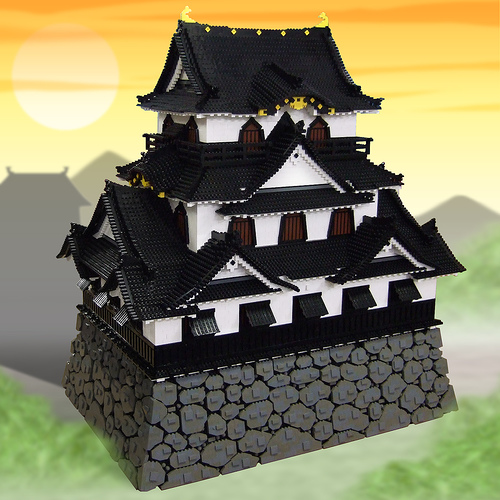 Takeshi Itou may not be the most prolific builder, but his creations are always worth the wait. His latest creation is Hikone Castle. Today, the castle is a National Treasure because it’s one of the rare castles from the feudal era that wasn’t torn down or destroyed and then rebuilt in modern times as a tourist attraction.

But enough about the real thing. What makes Takeshi’s version special is the technique he used for the base of the castle; the three-dimensional rock wall is amazing, built from bricks, slopes, and tiles. The scale of the castle seems pretty close to MINILAND (as compared to the smaller minifig scale Takeshi normally builds in), which has enabled Takeshi to use plates for the roof rather beautifully.

Read more about the real Hikone Castle on Wikipedia (in English) or the 400th anniversary site (in Japanese).