If you are a fan of the Harry Potter franchise and a collector of BrickHeadz, you might be scratching your head at the one-sided line-up released so far, which includes the three heroes of the story, along with Dumbledore, Hagrid, Buckbeak, and Newt, but only one villain so far, Gellert Grindelwald. Well, that is about to change. With the upcoming release of a brand new batch of bad guys and girls. That’s right, the most feared villain in history, He Who Must Not Be Named himself, Lord Voldemort, is finally joining the ranks of BrickHeadz along with his snake Nagini and Bellatrix Lestrange. LEGO BrickHeadz Harry Potter 40496 Voldemort, Nagini, and Bellatrix includes 344 pieces and will be available starting June 1, 2021. LEGO has not released a price or parts count at the time of this review, but based on previous multi-character sets, I’m guessing it will be around $24.99 US. 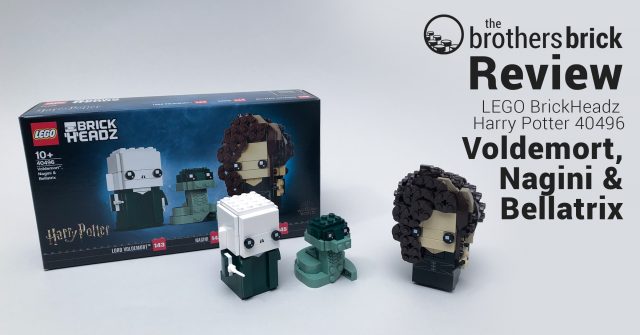