I love the Lord of the Rings films, but that’s about as far into the Tolkien waters as I’ve ever dipped my toe. But builder Josh is giving folks like me a taste of the deeper lore with this model inspired by the tale of Túrin from The Silmarillion. Here, Morwen bids farewell to Túrin as he ventures off towards the kingdom of Doriath. Josh’s use of round tiles and studs not on top techniques give a realistic rustic texture to the walls of this homestead. And the brilliant use of color for the foliage in the background reminds me of fall in Vermont. Good luck on your travels, Túrin. I hope Josh will update us on your progress. (I know I should just read the book, but it’s more fun this way.) 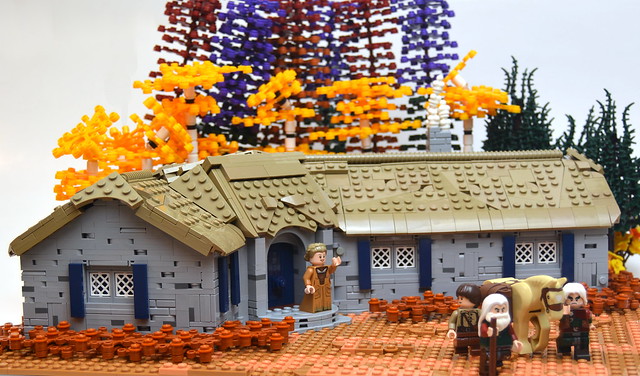 I’m drooling over anything that looks like a Corellian freighter. Created by builder Josh, this LEGO starship just might be the spacecraft you’re looking for.

Inspired by concept art from Rogue One: A Star Wars Story, Josh built this ship for his LEGO role-playing group. I really admire all the angles and curves he managed to achieve on his ship. It definitely has a Star Wars vibe while still maintaining a sense of originality. The choice to use black for engine and wiring detail was good, as it perfectly contrasts with the white hull. And just look at that little landing gear pylon!

The hangar itself is also full of details. For one, it’s incredibly smooth. The bars and piping on the floor add to the worn-in feel of Star Wars. I wish I had the instructions for those cargo pods on the right of the ship. They remind me of the orange ones we saw in Rogue One.

Josh is well known for his Star Wars builds. I hope to see more like this in the future!