There are some builders that we can’t help but showcase again and again. These are the incredible artists that somehow manage to consistently produce one beautiful build after another. One such builder, Felix Jaensch, is at it again. His LEGO animals are always superb, and stand as frozen replicas of their real-life counterparts. This handsome male kestrel is certainly no exception. He shares a remarkable, regal resemblance to the real bird, only slightly larger to capture the detail. 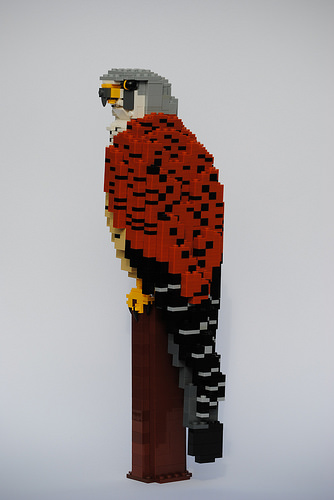 Kestrels are very unique predators. At least in the US, they have sometimes been mistakenly called “sparrow hawks” for their size. But these little birds are not hawks at all. They have the distinct “tear” marks and notched beaks of the falcon family. They also hunt and dispatch their prey with their beaks instead of their feet. One unique thing about kestrels is that they hover-hunt. Which means their wings are specially designed to fly almost stationary, less than 80 feet off the ground. Then they dive at their prey. Also, they can see the ultraviolet glow of vole urine, which is left in trails through fields. Additionally, males and females are dimorphic, meaning that they look different from each other. Males are smaller and more colorful, while females are larger and more neutral. 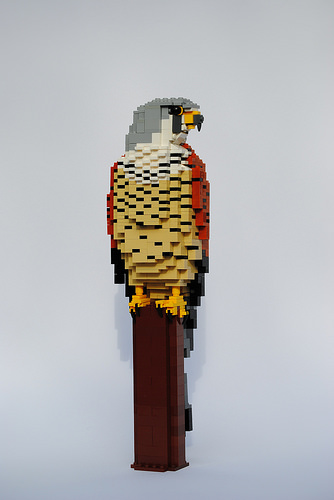 I have actually had the lucky opportunity to work closely with a mated pair of these magnificent little birds, Simba and Nala. I was captivated by their charm as I helped train them for an Ambassador Animal program at a wildlife rehabilitation center. Unfortunately, both birds were un-releasable due to previous injuries. Simba was missing an eye from hitting a window, and Nala had a bad wing from being attacked by a cat. It’s a stark reminder of our impact on wildlife. You can help by supporting your local wildlife center, putting a bell on your cat, and placing deterrents on/near windows.