Brick Fiesta is an annual Lego convention taking place in cities throughout Texas since 2010. This year’s event is happening in the Dallas-Ft. Worth metroplex from June 29 – July 2 at the Mesquite Convention Center. The theme is Automation, featuring Great Ball Contraptions and motorized gizmos at the center of display amidst over 35,000 sq. ft. of convention floor space. Register early by May 31 for $55 or thereafter for $65. Visit the convention’s website for more info.

If this is your first time attending a fan event, please check out our Attending LEGO fan conventions series!

Brick Fiesta 2013 took place in Dallas this past weekend. In its third annual event, Brick Fiesta has grown to be one of the largest medium-sized Lego conventions in the US, trailing behind its big sibs known as BrickFair, Brickworld, and BrickCon. This year the event was held in my location of residence, so I attended the convention, albeit briefly, to set up some MOCs and do coverage of the displays. Here are some of my favorite creations from the event. 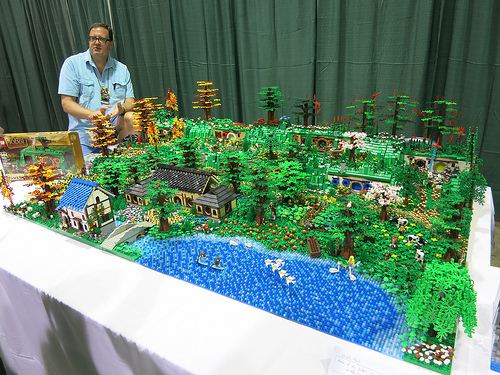 Matthew Greene’s Hobbiton was a colorful display full of lush landscaping. The cheerful colors and peaceful action of the Hobbits (minus the fire that burned on the top right on Sunday) was a soothing contrast to the builder’s other WW2 display that also attracted lots of attention. 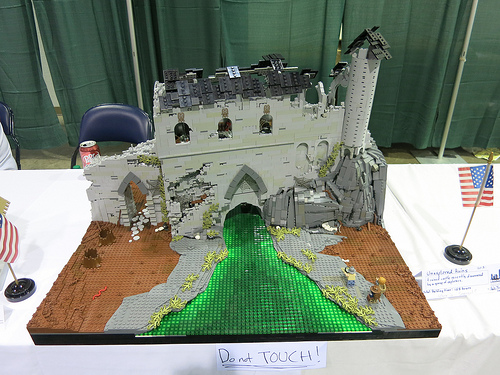 The Unexplored Ruins by a team of 5 builders showcased a lot of advanced techniques used to create a realistic-looking ruined castle. In the walkthrough videos I showed a close up of the MOC and highlight a few parts that I really liked. 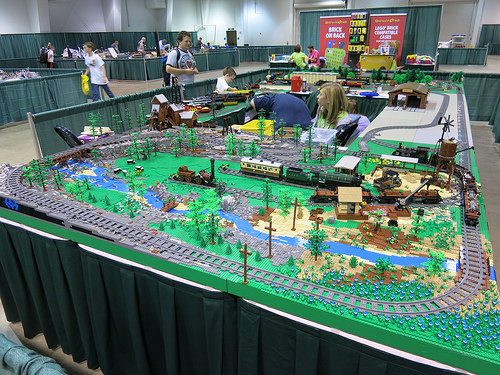 Even though I’m not a train builder, I enjoyed this layout by David Hawkins for the detailed landscape and the few realistic buildings.

These are many more creations that I enjoyed besides these featured ones. I encourage you to browse through the Brick Fiesta Flickr group to see more photos from the event. I have also recorded around an hour of video of me walking through the exhibit hall and talking about the displays in 4 clips, with part one shown below:

If you’re planning on attending Brick Fiesta in Dallas but have not yet registered, you have until the end of May to do so and get your engraved badge. Visit Brick Fiesta’s website for registration details.

If you’re considering attending Brick Fiesta from July 4-8 in Houston, you have until the end of this month to guarantee registration with an engraved brick badge. For more info on the convention, check out their website.

Brick Fiesta is taking place in Houston from July 4 – 8 and registration is now open. This is the second year of this growing Southern Lego convention, and you can see pictures from the first event on Flickr.

In the past two weeks I went from the largest Lego convention in the US to the smallest back to back. As a fledgeling event in its first year, Brick Fiesta was only about a tenth the size of Brickworld. Nevertheless, the public waited in line for up to an hour and half to enjoy MOCs such as Mirage, Tony Sava‘s Cathedral, and a Batman sculpture by 13-year-old Evan Bacon (which were the top 3 public favorites). There were other gems as well, which you can dig up by browsing the pictures on the Brick Fiesta Flickr group. 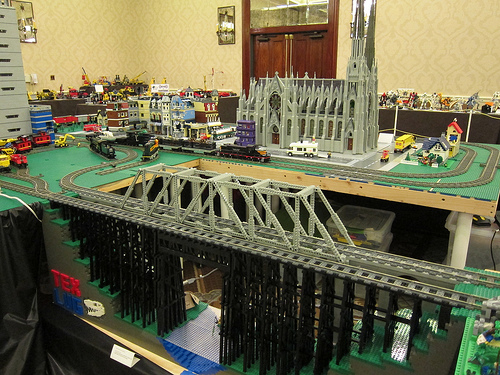 Some of my most memorable things at Brick Fiesta included the Alien Mothership draft (one of the best sets to draft), great trailer food and restaurants in Austin, and meeting lots of new people. At the same time, I should mention that this was the first Lego convention for Kevin Hinkle, who will follow Steve Witt’s footsteps as the new North America Community Coordinator. 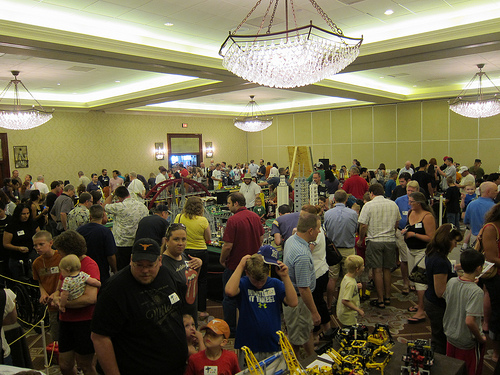 Overall, Brick Fiesta was a unique Texas style Lego convention. For more coverage of the event, you can check out TV segments of Brick Fiesta from KVUE and KXAN.

The count down has started for Brick Fiesta, the first fan-based LEGO convention in the state of Texas. If you can make it to Austin from June 30 – July 3, don’t forget to register by May 31st to secure your engraved badge. The last day to receive the special rate at the hotel is June 9th.

Fans of the southern states rejoice: a new LEGO convention presented by TexLUG called Brick Fiesta is taking place in Texas this summer. This is a standard 4-day AFOL convention with a weekend public expo. Registration is now open and you can check out the details on the Brick Fiesta website.