Over the years we’ve seen the LEGO banana being used in various creative ways. The part was originally designed for LEGO Belville, so it’s a bit out of scale when it comes to LEGO minifigures. Fans love using it for claws, teeth, horns, fangs and yes bananas. Thanks to themarkstudios_84 we can now also add motion effects to that list. The Pork Grind figure is looking very sleek and the inclusion of motion graphics makes these figures look like they popped right out of a comic book. 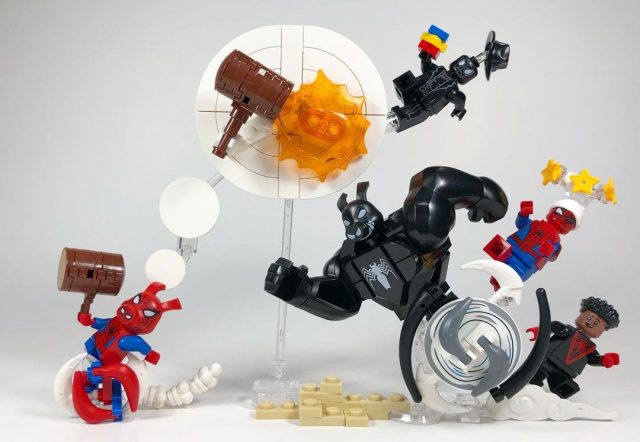 Pork Grind and Spider-Ham appear to be running. The bananas represent the movement of the legs. Adding the tasmanian devil swirl tile is a very nice touch. And the difference between the ice cream scoops and the Monkey Kid cloud also indicates the difference in height between the two running minifigures. The thought cloud adds to the comic book feel, same goes for the stars flying around poor Spider-man’s head. My guess is Spider-Ham tried to hit Pork Grind with the mallet, but he ended up hitting our friendly neighbourhood Spider-man.