When I first saw this model, I had to do a double-take. It didn’t register as LEGO at first but the second glance proceeded to blow my mind. Builder Ted Andes created this fantastic model for a big competition between builders that happens most summers nowadays. Inspired by the ninth card in the Major Arcana of the Tarot, The Hermit, this model utilizes a slew of old and new pieces from the System and Technic alike. Light nougat hands hold key objects from The Rider-Waite Tarot Deck’s version of the Hermit art. Candlesticks in dark tan make a simplistic staff that fits perfectly with the hands. The other arm lifts up a lantern made with slim black wedge belt wheels linked with bars and studs as the frame while two oppositely oriented triangular clips create a light flare effect to match the card. Spiky Hero Factory armor in white is inverted as a beard that consumes the Hermit’s face while his hood is made of a large Chima Gorilla head. A clever camera angle hides the gold and mouth details of the mask just enough to sell the hood effect. A fabric cloak hides most of the inner structure of the figure which is mounted on a raised mountain baseplate that mostly showed up in Bionicle sets. 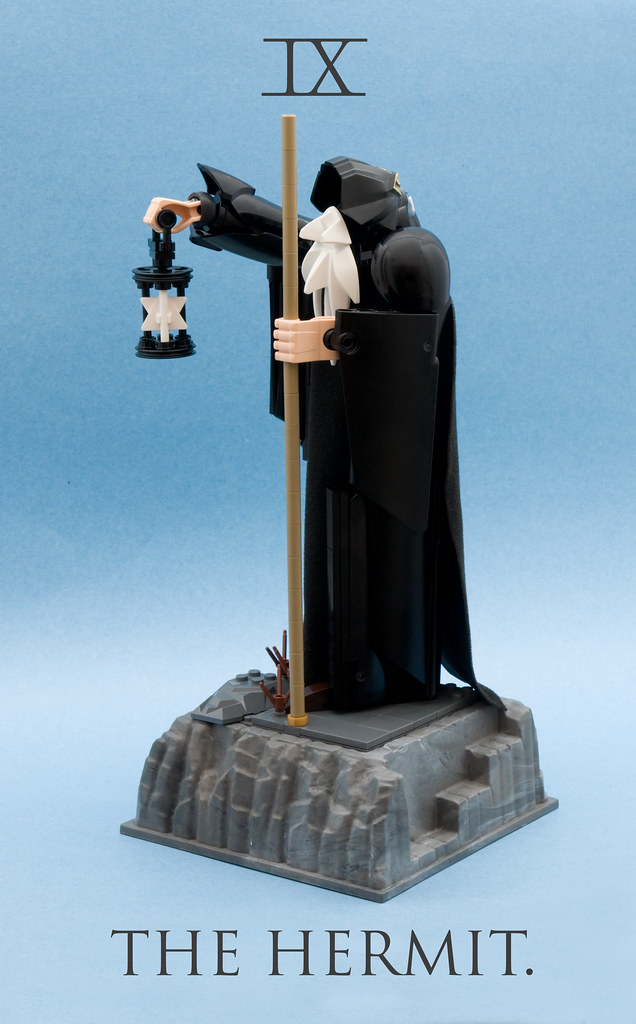 The meaning of this card within the Tarot is somewhat clear. It is a time to look within and identify those things about yourself that may need reexamined. Sometimes the answers to life’s questions lie inside and only through introspection will they be revealed. Similarly, Ted Andes has presented a magical model that hides the secrets to some of its construction behind that dark robe and black Technic panels.