The hit Disney+ show The Mandalorian closed out its second season with one whopper of a cameo, Luke Skywalker! Who swoops in at the last second to lay waste to an entire battalion of dark troopers. Up until now, there has only been one set to include the ominous and overpowered battle droid, the Imperial light cruiser. Well, LEGO fans of the series will soon get the chance to reenact the memorable corridor attack which closely mirrors the epic hallway scene from the end of Rogue One, without all the screams. LEGO Star Wars 75324 Dark trooper attack includes 166 pieces and will be on sale starting March 1, 2022 for US $29.99 | CAN $39.99 | UK £24.99 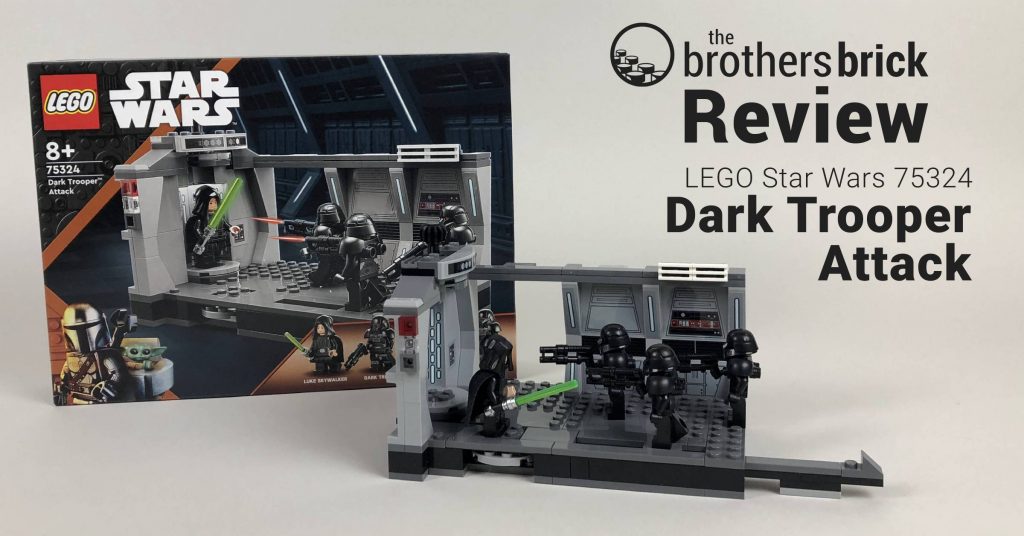 The front of the box shows the completed set in an action scene, with added effects for the glow of Luke’s lightsaber, and pew-pew blaster fire from the dark troopers. The background shows a more detailed image of the light cruiser corridor from the show. Along the lower-right corner is a lineup of the 4 Minifigs from the set, Luke and three dark troopers, while the lower-left corner shows the Mandalorian and Grogu in his floating pram. 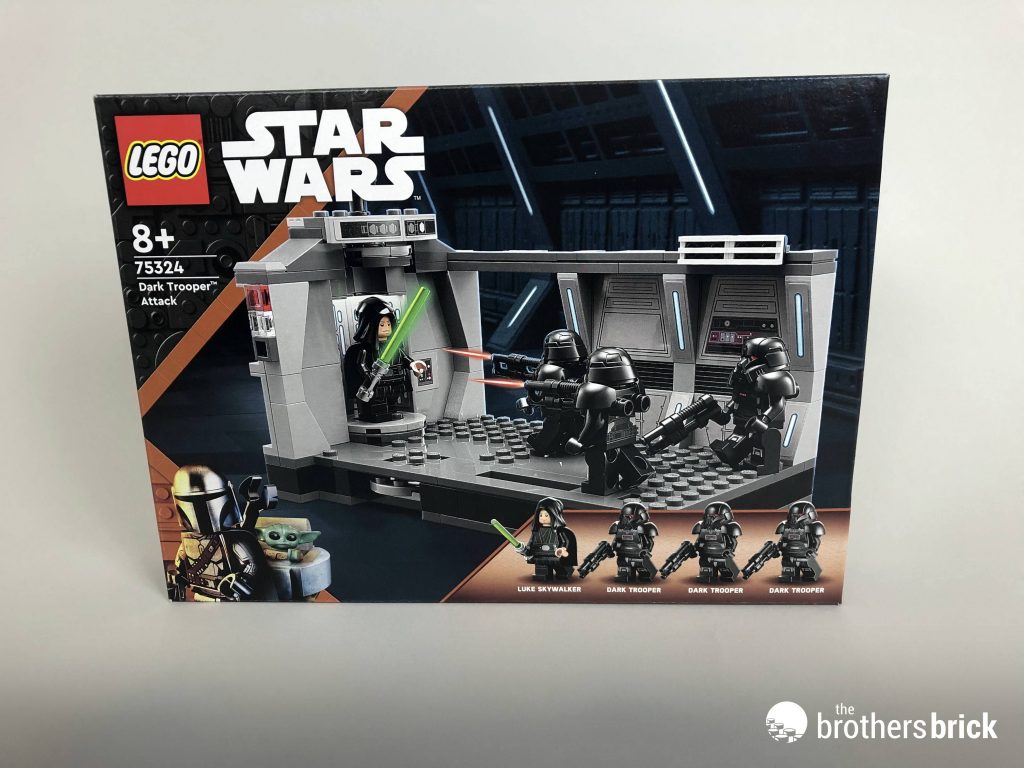 An interesting detail to point out is that the box art and instruction booklet depict the dark troopers with the torso printing in error, showing the details from the front on the back and from the back on the front. Fortunately, the included torsos are printed correctly. The error will likely be corrected before the official release, but many early review copies went out with this error. 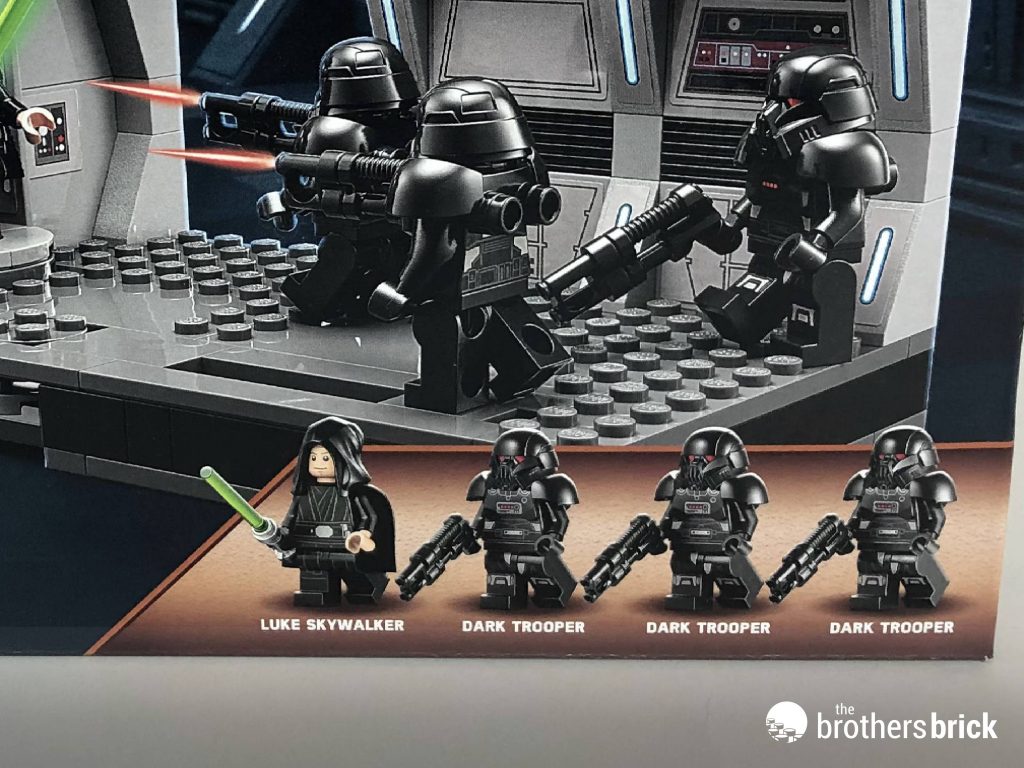 On the back of the box, the scene is repeated, but with the Minifigs arranged in a different way. There are also two inserts with play features, like the rotating lift door, a rotating floor section, and a section that slides forward and backward to advance a dark trooper and send him reeling from Luke’s force ability. 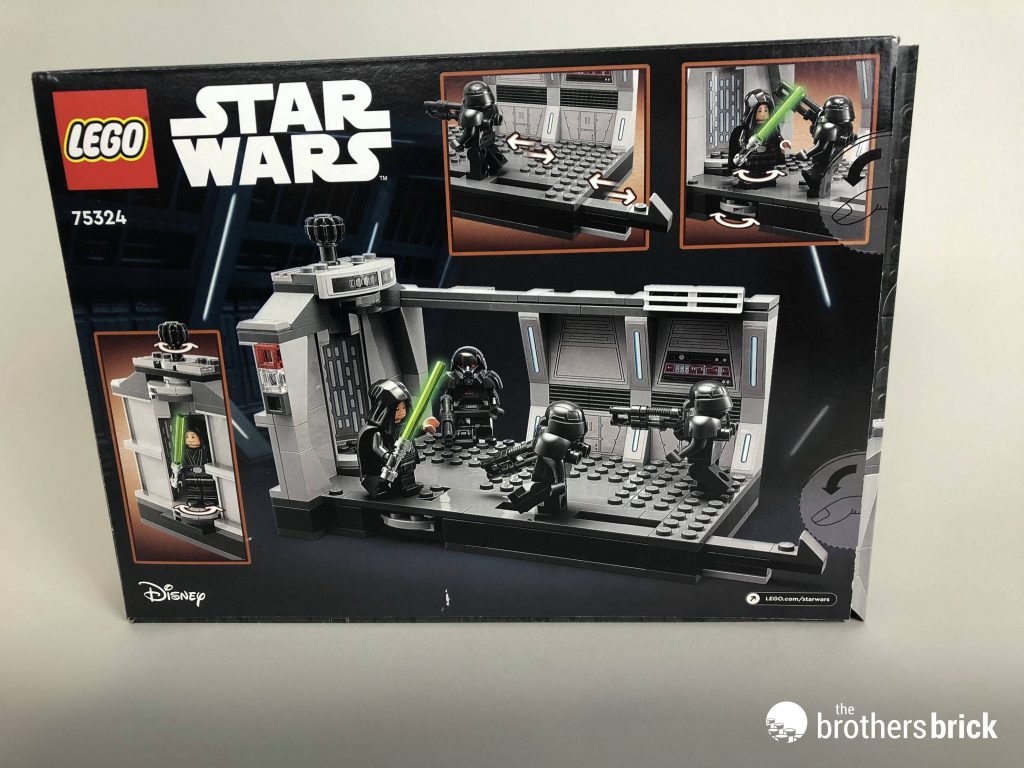 Inside the box are 2 numbered bags, a small instruction booklet, and a sticker sheet. 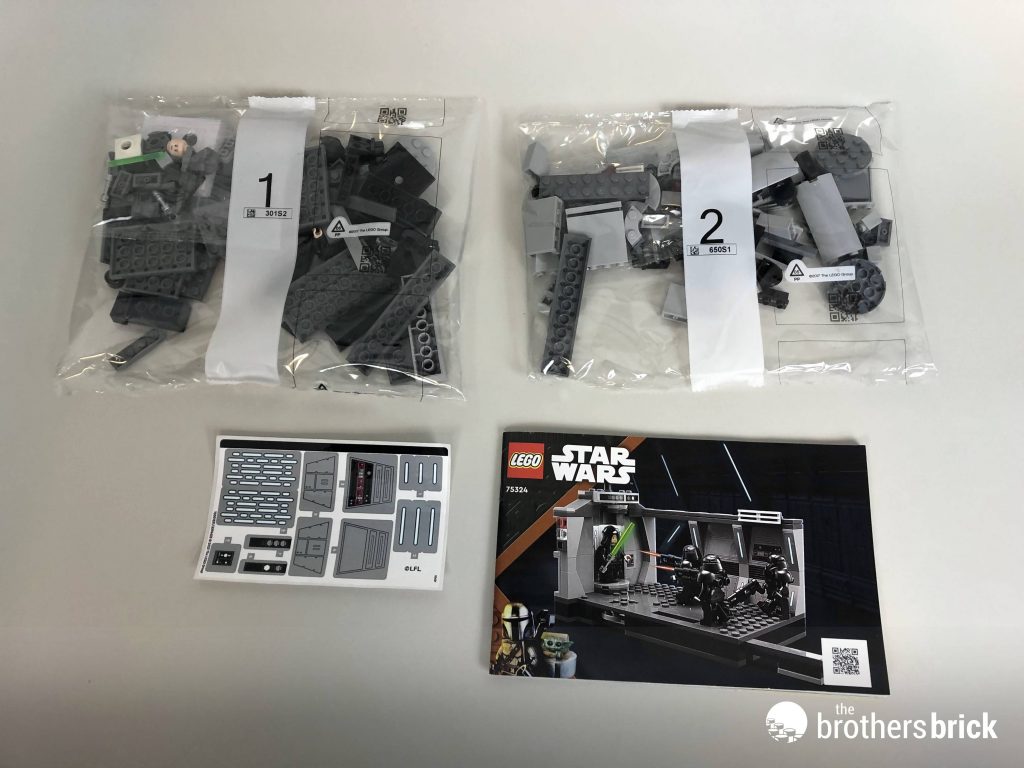 The build starts out with some standard brick+plate foundation building, with a small turntable used to attach a round plate that serves as the mechanism for swiveling the section of the floor in front of the elevator door. 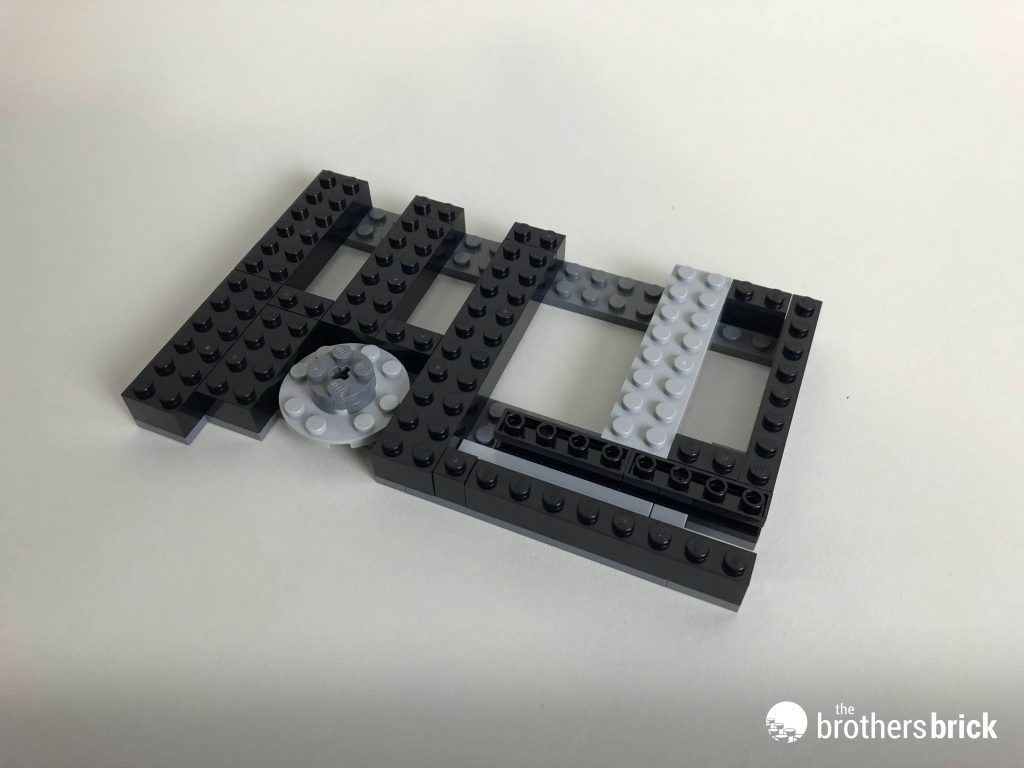 The foundation is pretty uneventful, aside from the bar that slides in and out, and is a fairly standard design. The next part is the rotating lift door and the back wall of the corridor. 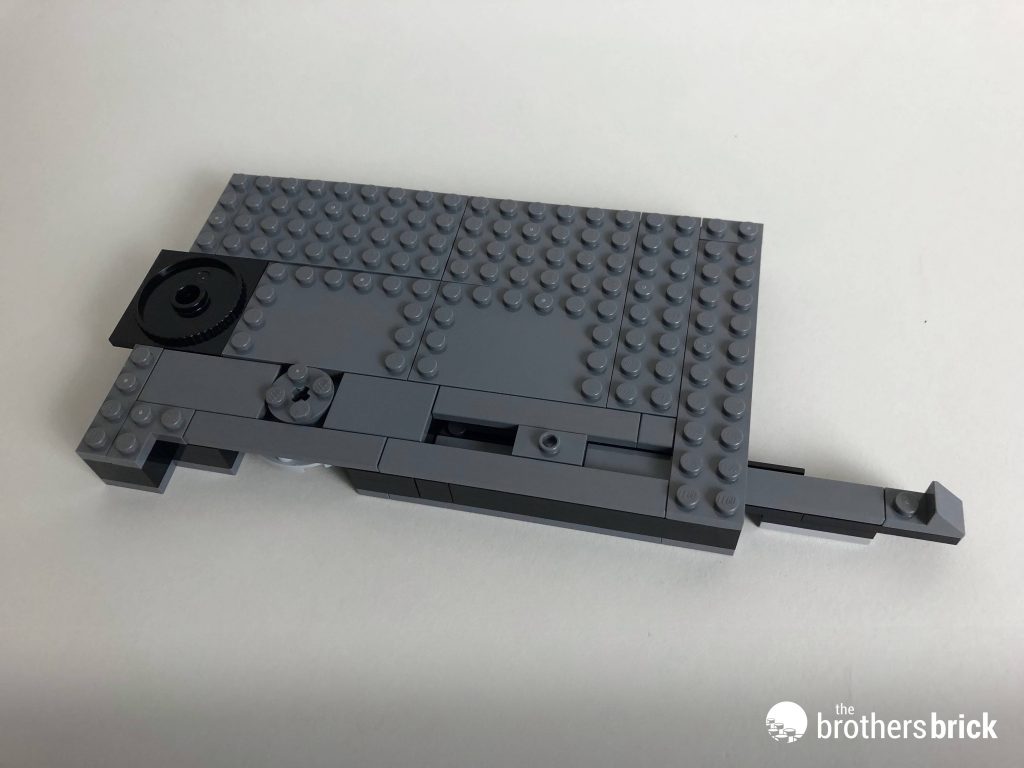 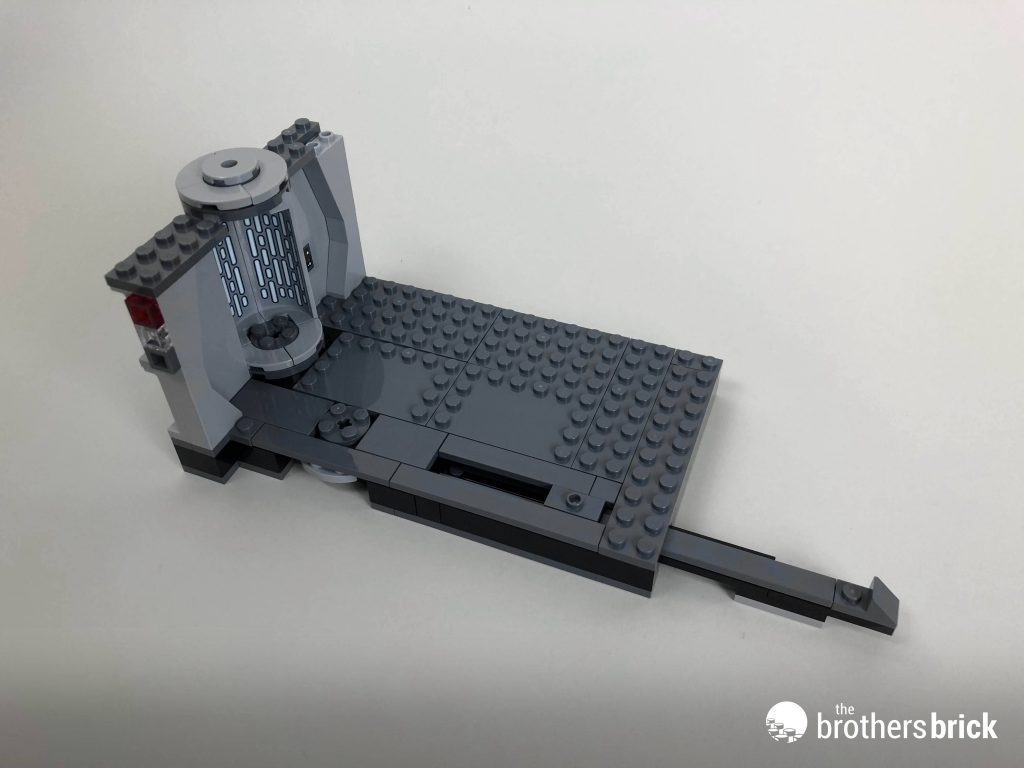 After that, we start in on the corridor side, which includes a large gap. I don’t think this was designed for the eventual addition of more corridor sections, as there were none of the usual Technic pin bricks found in sets that are intended to be modular, like the latest few waves of Harry Potter sets. 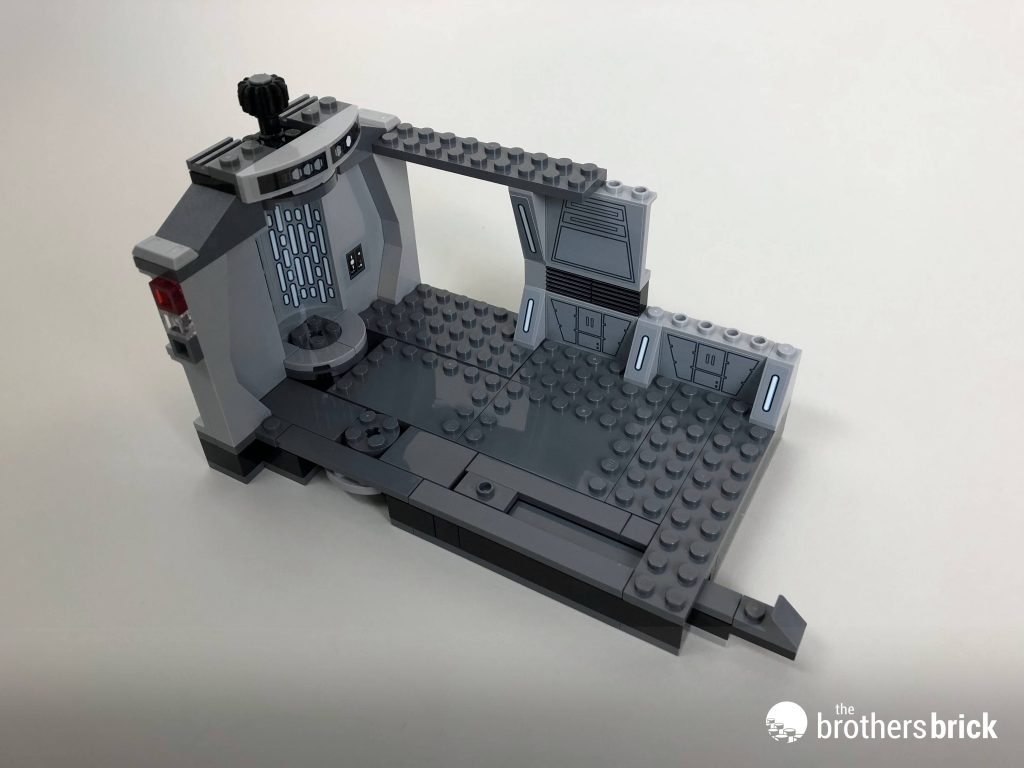 We finish up the scene with the rest of the corridor wall, including a few stickers showing control panels, and some grill tiles in white. 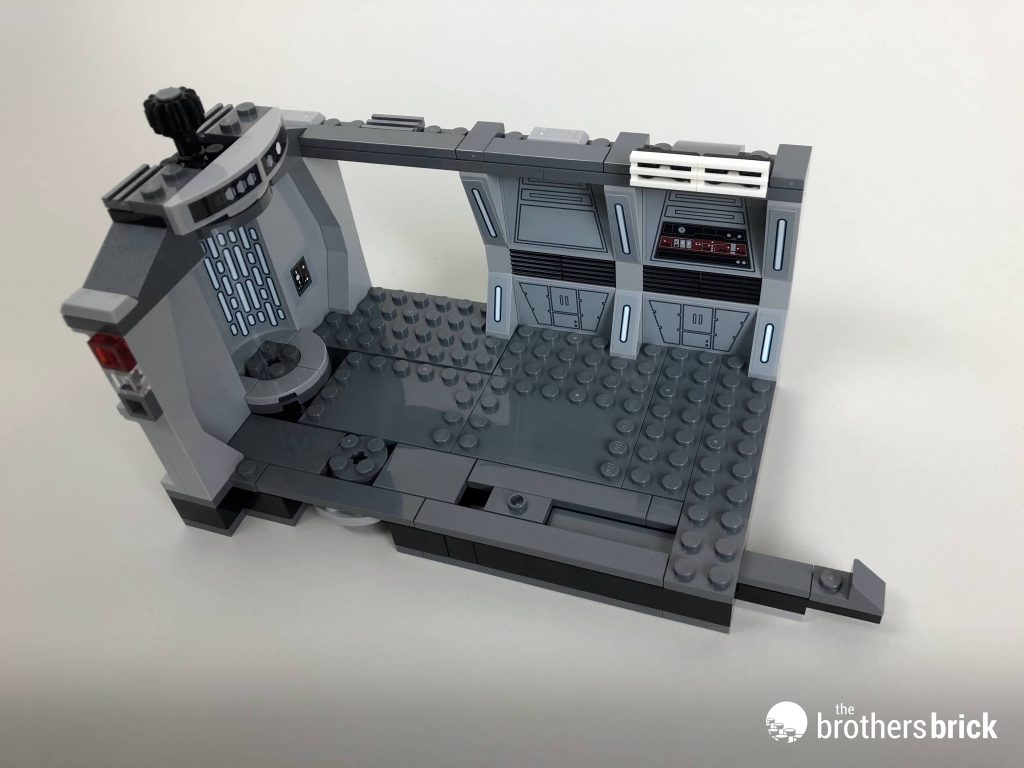 The set includes 4 Minifigs, Luke with his lightsaber, and 3 dark troopers armed with blaster rifles. Luke has two expressions, a thoughtful but not too concerned look, and a friendlier smile. He does seem to be taking the detachment dogma seriously, or else he is just matched to the somewhat wooden performance of the digital render from episode 8 of The Mandalorian’s second season. Luke’s torso is printed front and back, and his legs are printed on the front. Luke is sporting one of the newer hood designs. 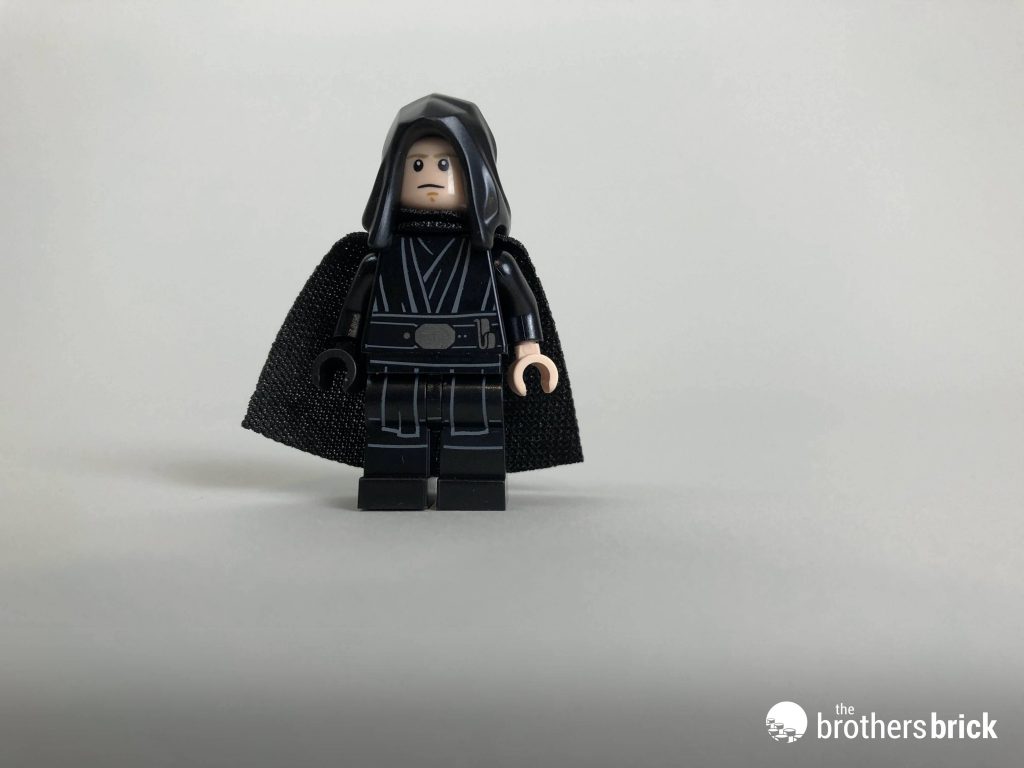 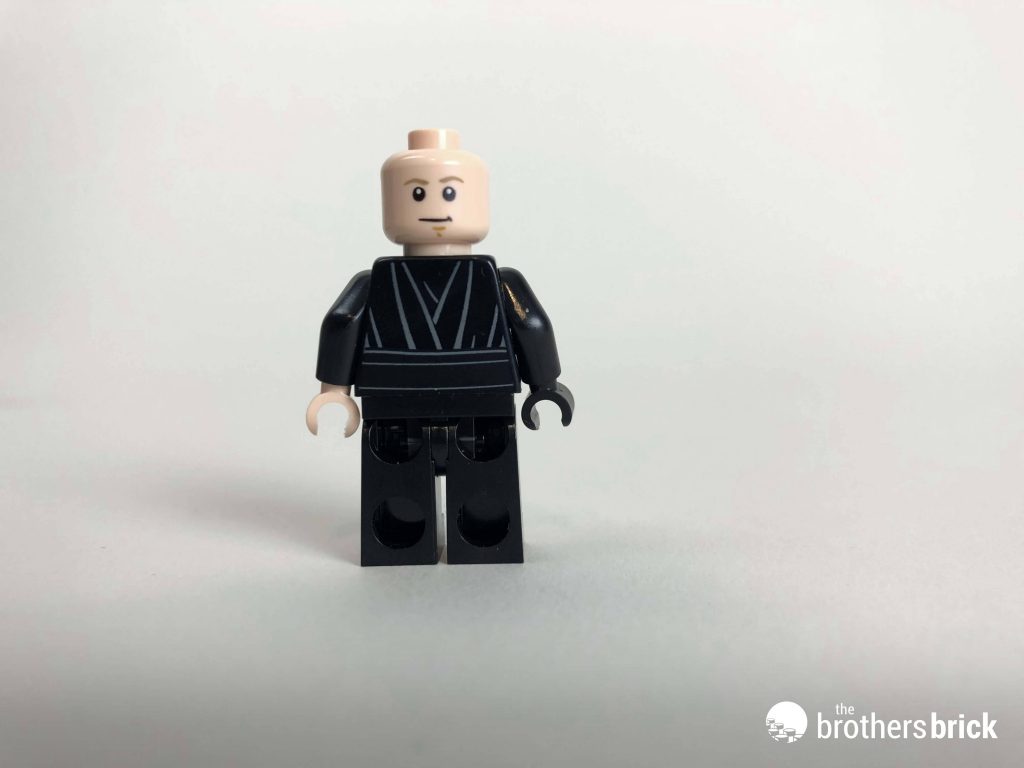 The three dark troopers are all identical and include a shoulder piece with some duplicated printing from the torso. The dark troopers also have front and back printed torsos, and front printed legs. 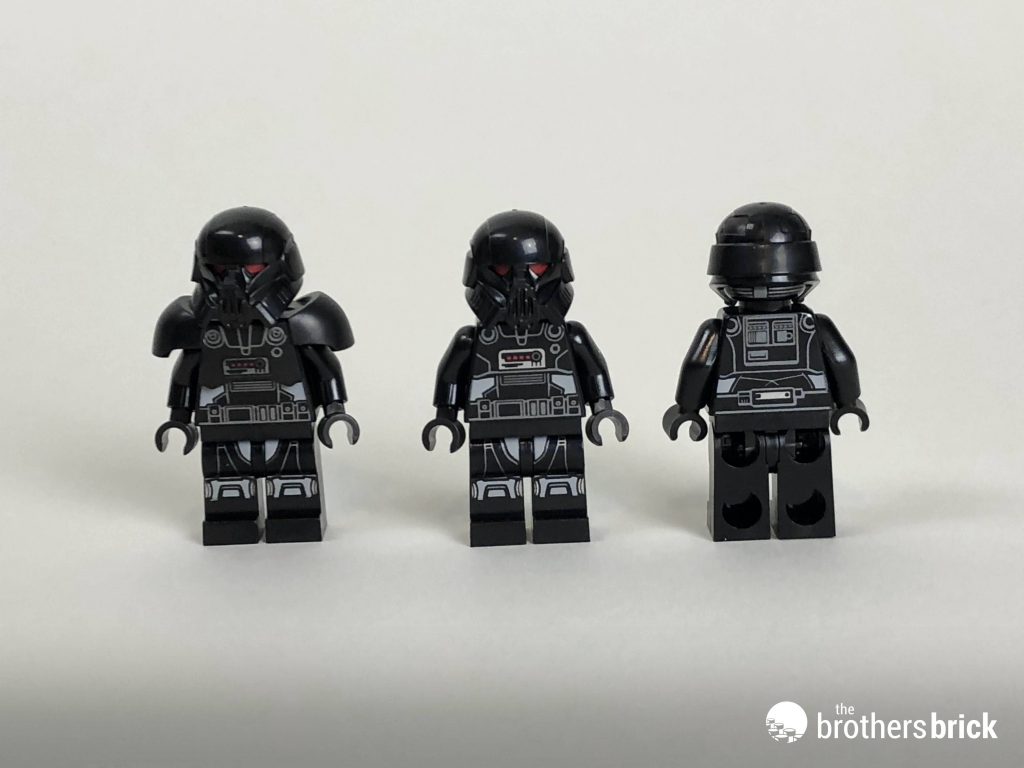 The completed scene has plenty of options for setting up the battle scene any way you want, and the play features are simple but pretty neat. If you want Luke to emerge from the elevator with his lightsaber ignited, you may be disappointed, as there is barely enough room for the Minifig, and his arm needs to be at his side. You can have his blade at the ready if you imagine the door has already opened. 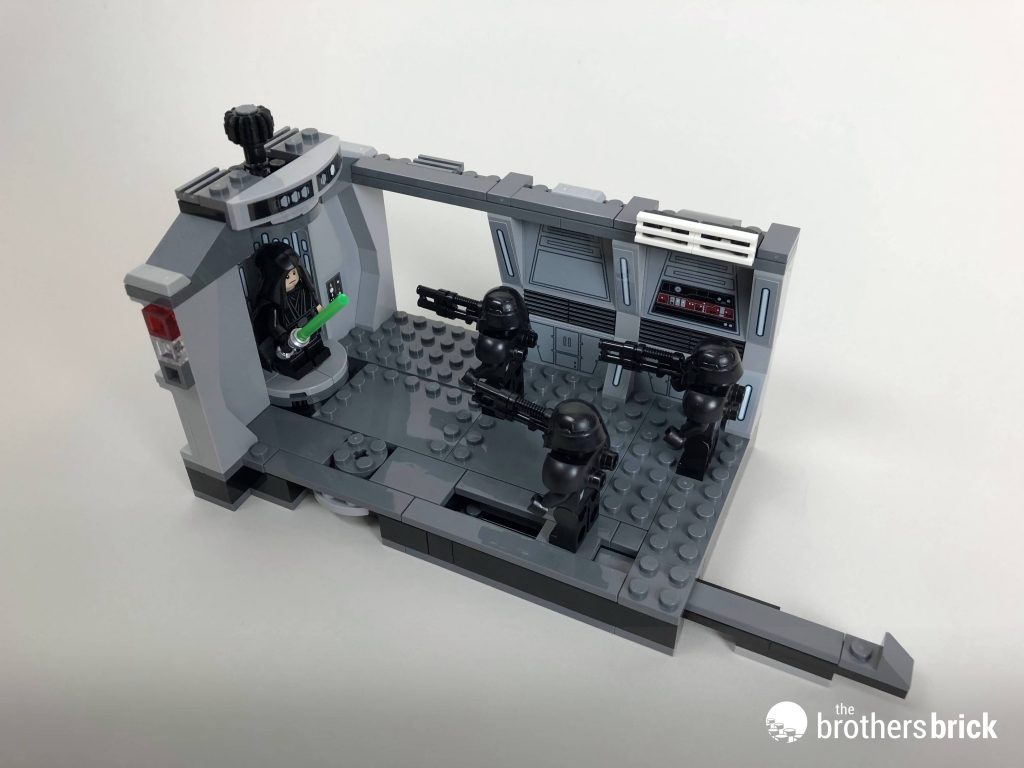 The spinning section of the floor can hold either a turning dark trooper or Luke about to slice a trooper in half. While the sliding section can send a trooper flying back from a force push, or straight towards the deadly blade with a force pull. The hallway itself is fairly simple, and the gap is a little strange since it would only have required an additional 6-10 pieces, but as a display set, it is fine. 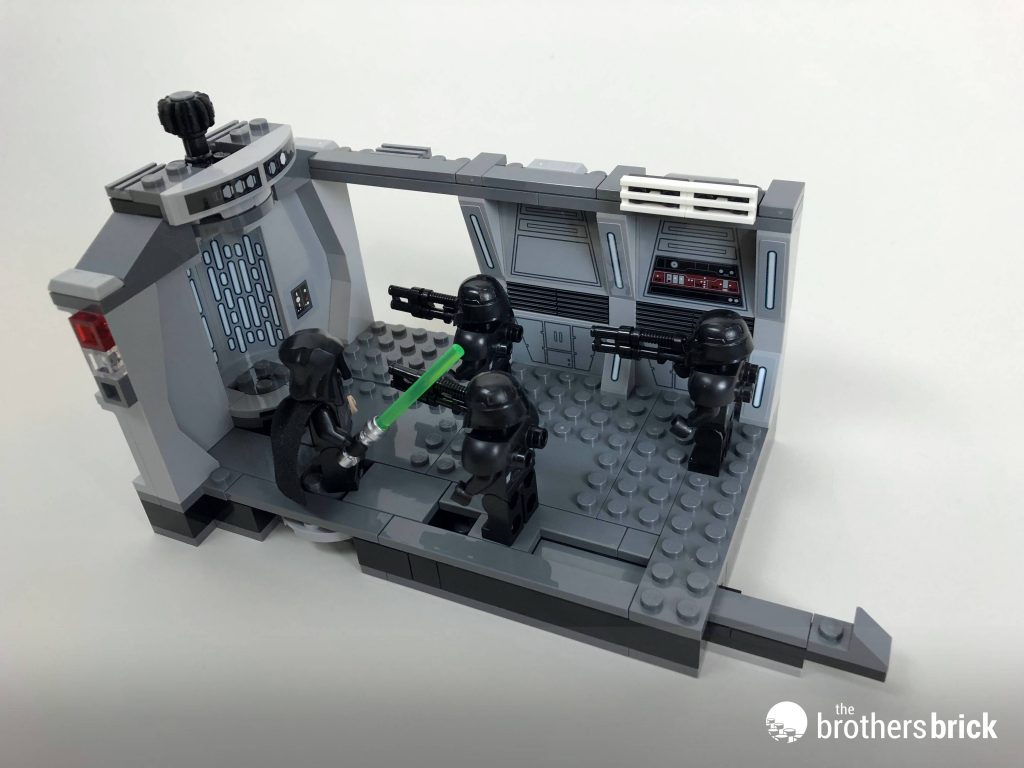 The build may not have had much to it, but there have certainly been Star Wars sets with fewer parts, like 75310 Duel on Mandalore, and the play features plus the new Luke minifig and dark troopers make it worth the price. Although if you are looking to form your own battalion of troopers, you’ll need to pick up 7 copies of the set (or hit up your favorite after-market site). LEGO Star Wars 75324 Dark trooper attack includes 166 pieces and will be on sale starting March 1, 2022 for US $29.99 | CAN $39.99 | UK £24.99 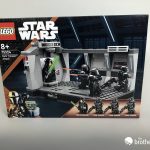 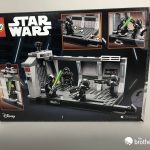 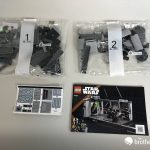 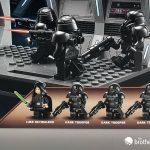 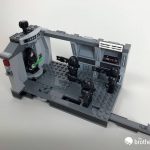 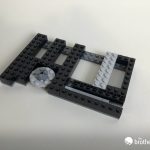 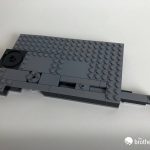 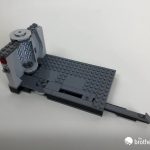 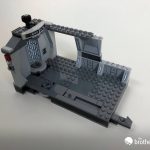 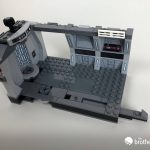 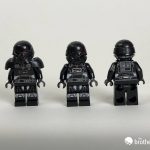 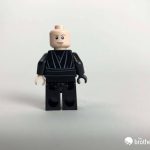 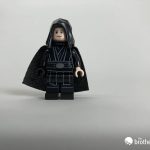 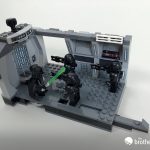