We here at The Brothers Brick love creative part usage. We love mosaics. And we really love when the two come together. We had an opportunity to talk with Deepak Shenoy (Deepshen6) about the creative process behind their recent series of geometric LEGO wonders. Eye-bending and intricate, these designs really satisfy. 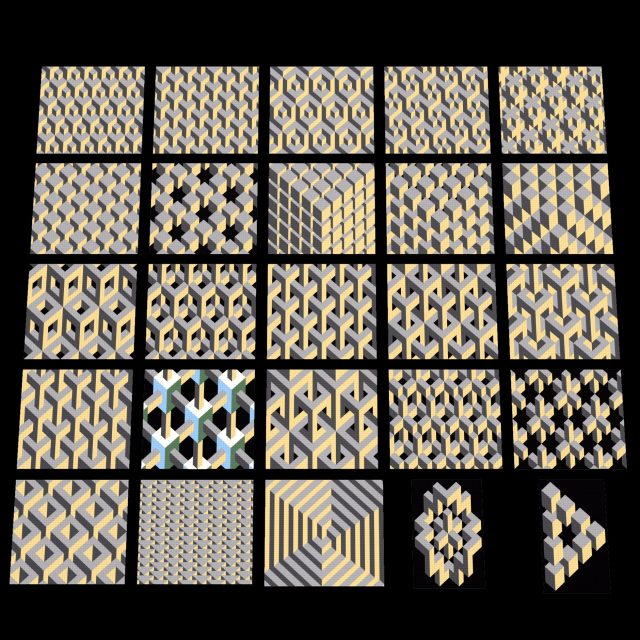 Could you introduce yourself to our readers?

First of all, I would like to thank you for giving me this opportunity! My name is Deepak Shenoy, though I use an abbreviated version of that (Deep Shen) for my LEGO-related posts on social media. I discovered LEGO as an adult just a few years ago thanks to my daughter (I was oblivious to it as a child growing up in India and only became aware of LEGO after I moved to the US as a young adult). My first foray into this hobby was in the form of a model of the Empire State Building that I built almost on a whim using around 10000 pieces. I enjoyed the experience so much that I kept going and built models (real and digital) of many of the other iconic American skyscrapers (some of these models have been featured on The Brothers Brick in the past). In the last year or so, I have also tried to expand my horizons (within this hobby) outside of skyscrapers and attempted other kinds of builds – both architecture-themed (models of world landmarks like the Taj Mahal and the Blue Mosque in Istanbul) and otherwise (mosaics and a few simple sculptures). 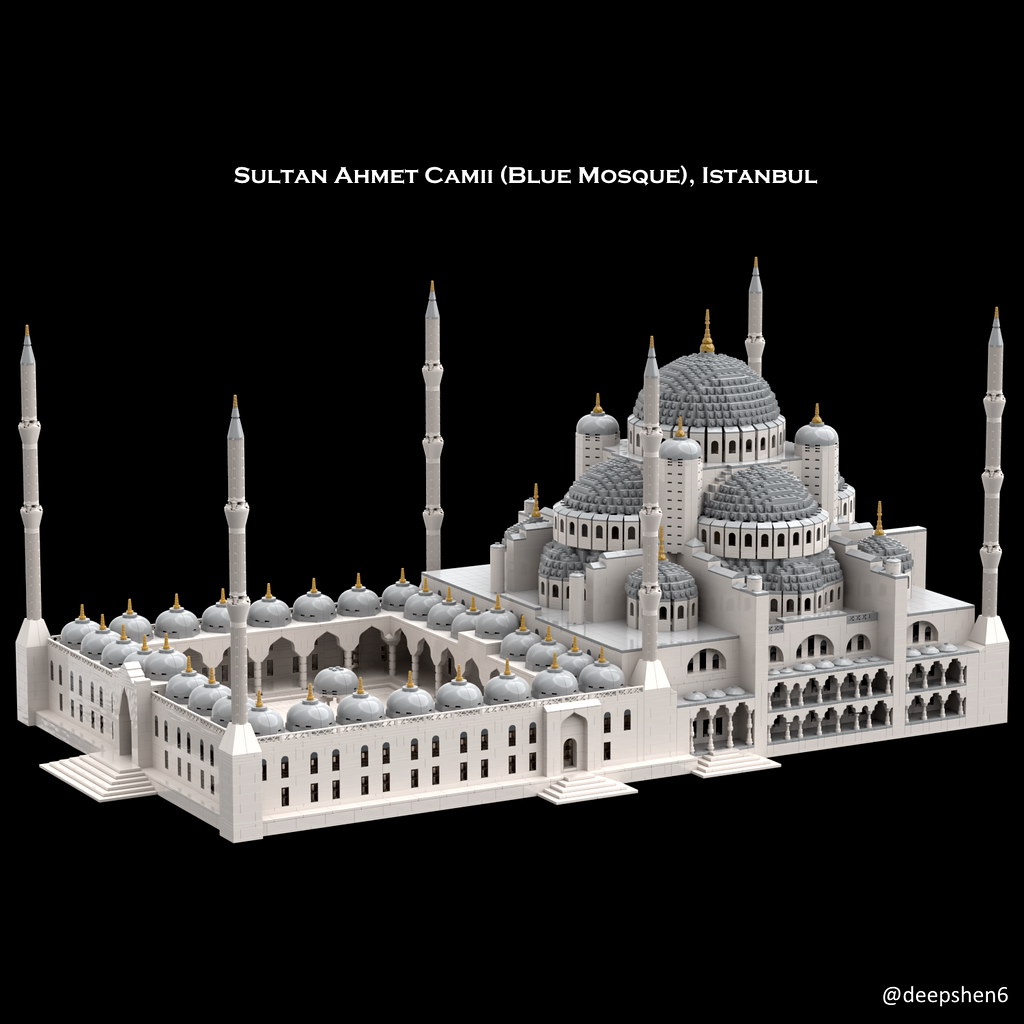 How long have you been interested in LEGO mosaics?

I have been fascinated by LEGO mosaics ever since I got into LEGO but rather than simply taking a picture and converting it into a mosaic using software, I wanted to try doing different kinds of mosaics inspired by other forms of art and craft. In fact, quite a few other crafts (cross stitch and needlepoint for instance) have similarities to LEGO mosaics (in that they are based on the same kind of square grid that LEGO uses). My first mosaic (if you can call it that) was a studs-up circular mosaic I built a couple years ago with an intertwined snake pattern that I designed by myself. I followed that up earlier this year with two mosaics that were adapted from cross stitch patterns (a peacock and a lion – which were also featured on The Brothers Brick). These three have been the only mosaics I have built using real pieces so far, but I have built several other mosaics digitally. 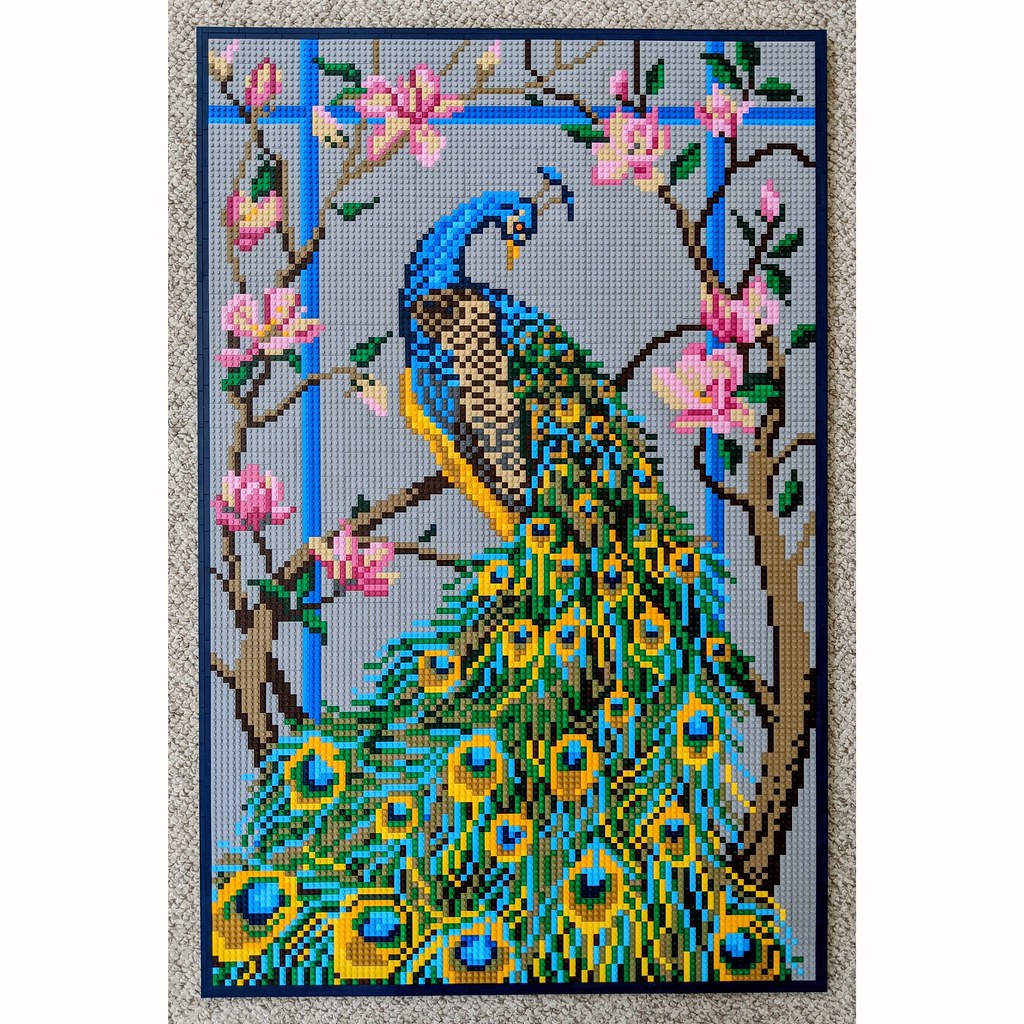 Is your build process different when you work digitally vs in physical brick?

I am assuming this question doesn’t pertain to just mosaics. I would say that the process isn’t substantially different between digital and physical builds – at least for me. I really envy the people who can take a random pile of bricks and turn it into a wonderful build without any planning and preparation. My process is much more slow and deliberate and building something digitally is usually the first step even for models that I plan to build using physical bricks. That said, digital builds can have their own advantages and disadvantages. When there is a lot of repetition involved, the ability to create a sub-model in stud.io and copy and paste it as many times as you need definitely makes the build process a lot less tedious. But the flip side of the coin is that structural issues can crop up on a physical model (especially architecture builds) that would be impossible to anticipate and plan for when you are in the digital realm. 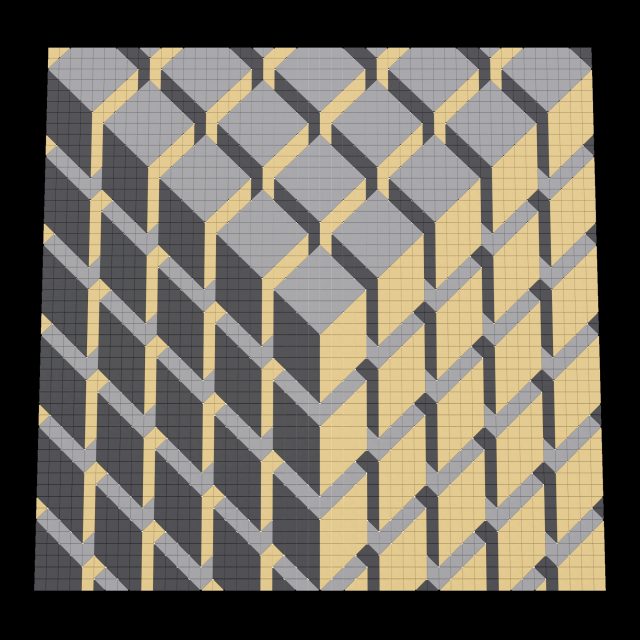 How did you select which parts to limit your designs to?

I stumbled upon the idea of doing these geometric pattern mosaics after seeing one that was posted by a fellow builder (John Bucy). It was a comment he made about using a 3D medium (LEGO) and limiting yourself to 2 dimensions (a mosaic) in order to create the illusion of 3 dimensions that piqued my interest. I wondered if I could pick up this idea and run with it and 25 mosaics later, I can probably say that I got more than a little carried away. Just like the original mosaic from John that I took inspiration from, I limited myself to just two types of LEGO tiles – the 2×2 regular tile and the 2×2 triangular tile in all of the mosaics that I did (I did use 1×2 tiles in some of the early mosaics but I have since reworked them to entirely do away with the 1×2 tiles). 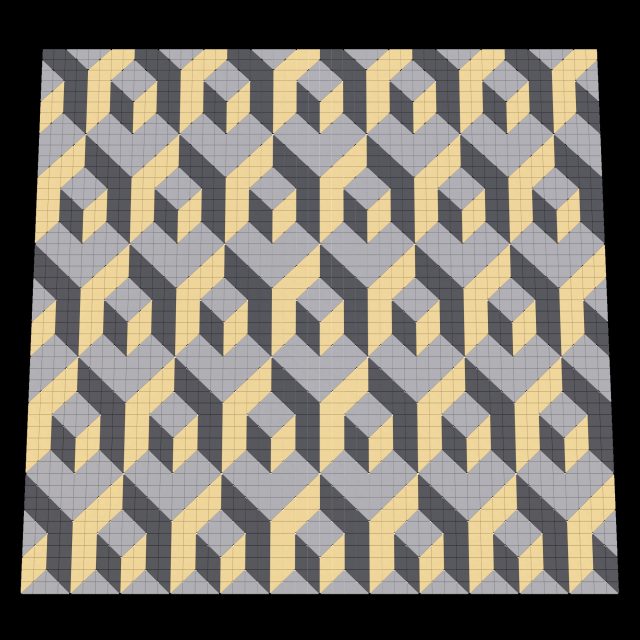 Which of the geometric patterns did you find most challenging?

Once I started doing these geometric pattern mosaics, I found them to be addictive (but in a good way). I kept looking for more and more of these patterns that I could convert into mosaics (using the 2 tile types that I had chosen to limit myself to). Given that I had to make them pretty big for the 3D effect to be convincing (96×96 studs was my baseline size), I had to rely heavily on sub-models in stud.io. These mosaics would have been far too tedious to build one tile at a time and so I looked for ways to break each mosaic into smaller sections that could be built once and repeated. This got especially challenging (and required quite a bit of trial and error) on some of the more complex patterns that involved interconnected cubes because I had to make sure that the different copies of the sub-model would mesh together correctly and form a single, continuous pattern.

Which is your favorite?

The Penrose Triangle is definitely one of my favorites. This relatively simple mosaic not only creates the illusion of a 3D shape but also one that is impossible to construct in real life. The Penrose Triangle has been represented in various forms of art over the years and I am glad I could do a LEGO mosaic interpretation of it. I am also fond of the cube that is made up of smaller cubes (it is different from a lot of the other mosaics that have patterns that are repeated). 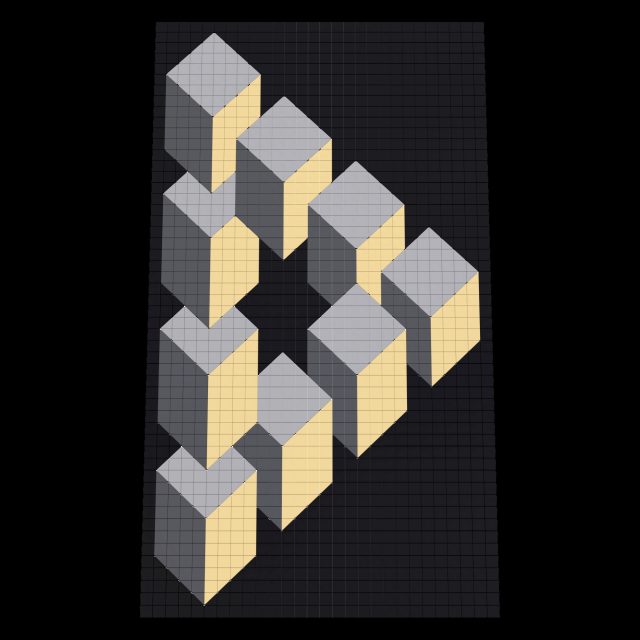 Why did you limit the color palette ?

The key elements in all these geometric pattern mosaics are the 2×2 triangular tiles and LEGO doesn’t make them in many different colors (at least not yet). Also, given that I was doing several of these mosaics back to back, I didn’t want to have to make a decision on the best colors to use for each one. So I just went with a combination of colors that worked well (tan, light bluish grey, dark bluish grey and black). If I were to build any of these mosaics using real pieces, I may use colors that pop out a little more. 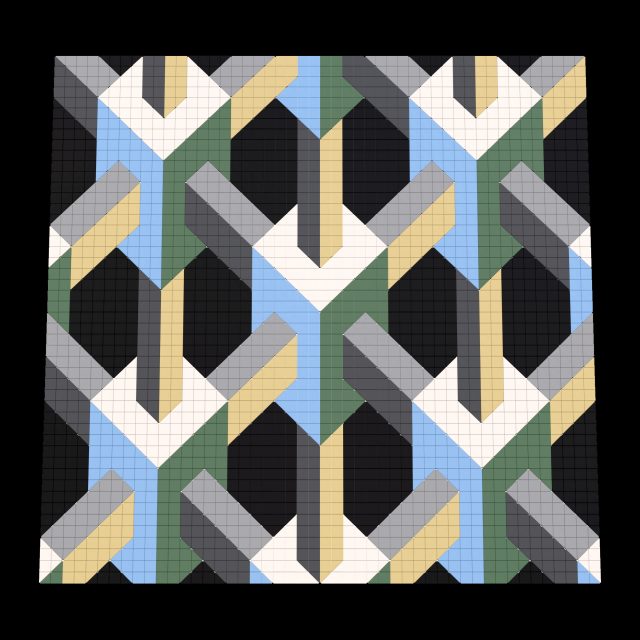 If you had the brick, would you want to build these “in reality”?

Yes, definitely. I probably wouldn’t build all of them (that would require a lot of bricks – the 25 mosaics use a total of over 69500 pieces) but I hope to be able to build at least a handful of them using real pieces at some point down the road.

What’s up next for you in the mosaic world?

I do participate in the ‘Mosaics on Monday‘ challenge that a few like-minded folks have running on Instagram. This forces me to come up with something new for each week. Beyond that, I don’t have anything specific planned right now but I want to continue exploring the treasure trove of cross stitch, needlepoint and quilting patterns out there and adapting some of them into LEGO mosaics. I have also been toying with a few ideas for other types of mosaics (mosaics built on the different surfaces of a 3D shape for instance) but it remains to be seen if any of these actually pan out. 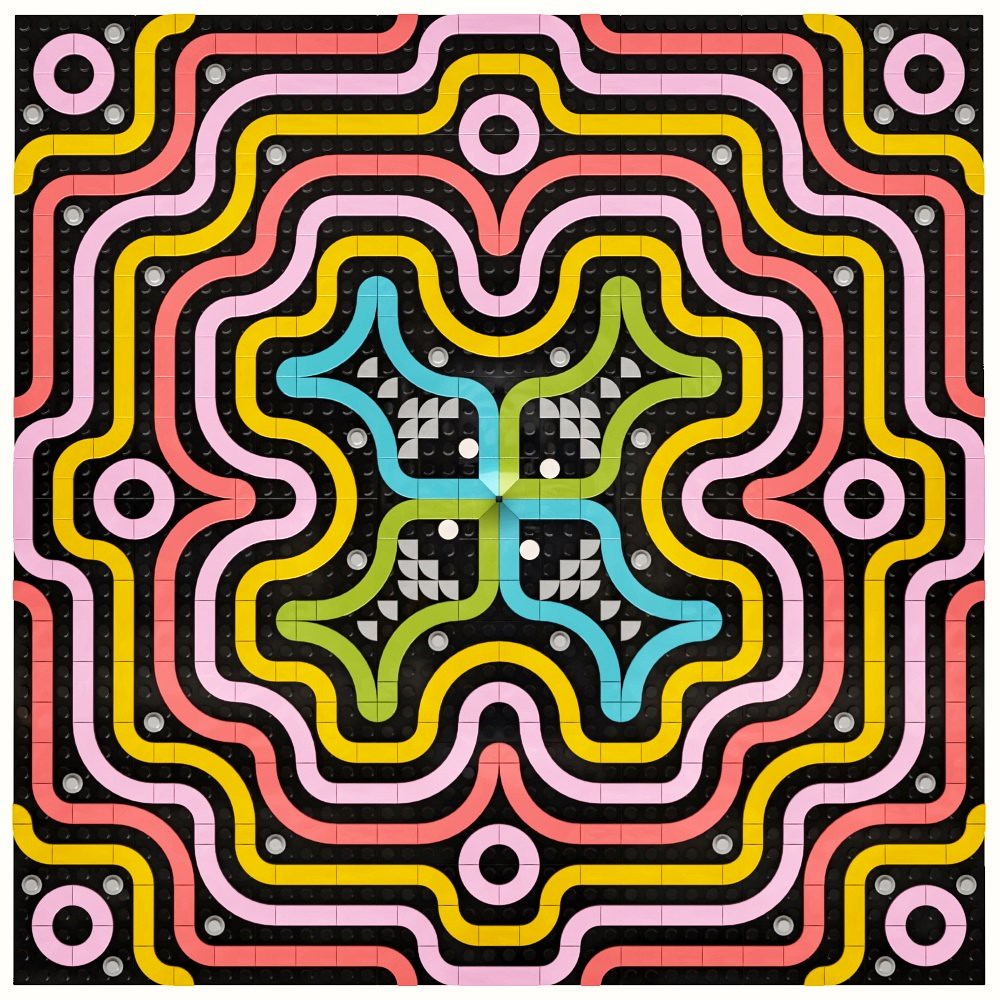 Our sincere thanks to Deepak for these great insights into the creative process! If you want to keep reading, we suggest you take a stroll through our art archives for even more inspiration.