LEGO Builder’s Journey – once upon a time as an exclusive on Apple Arcade (iOS and macOS) released in December 2019, the LEGO Builders Journey has a new breath of life in 2021 with a release on the PC and Nintendo platforms. Advertised as having “many new levels” and “fresh mechanics”, does it live up to the high reviews and praise when it was first released? With the caveat that our review is based on the Nintendo Switch console, read on to find out whether it’s worth spending your hard-earned dollars on this game. 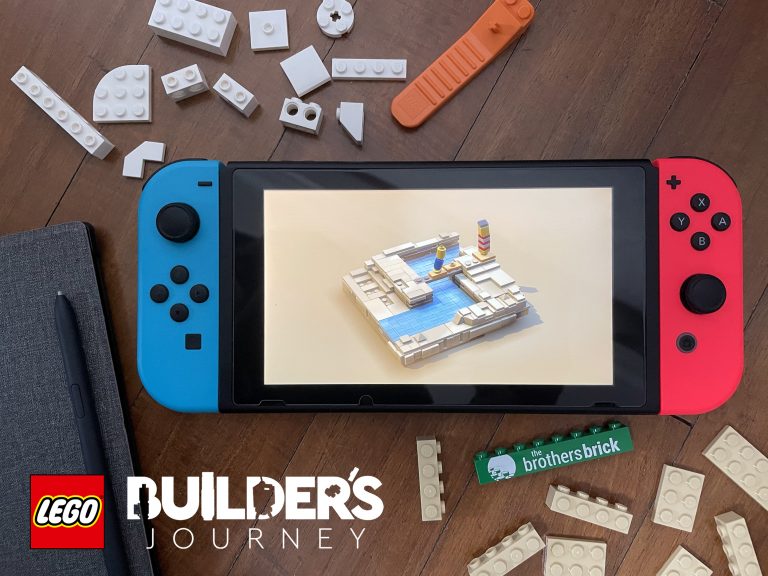 Is the game worth a purchase?

The answer is always “it depends” as the price is a factor in my decision. At the retail price of US $19.99 (for both PC and Switch for the North American market) the answer is simple – No. Having said that, you may want to check out the game on your local Steam store (PC) as the price varies considerably from country to country retailing for below $4 USD in Turkey, ~$13 $USD in Singapore, right up to $19.99 USD for the American market. For the amount of content, it falls short of the expected entertainment and gameplay duration. I played the game over several sessions, but for someone who has a bit more focus, I’d expect the gameplay to complete within 2 hours in a single sitting – and there is no replay value after completion. I believe the real reason it had rave reviews during its debut in 2019 on Apple Arcade was the lack of a real price gauge. Apple Arcade is a US $5.99 monthly subscription service and the factor of how value is positioned as an ‘all you can eat’ model with new games being introduced regularly dampens the effect of actual dollars spent on a single game.

A good storyline can be the heart of a game. The LEGO Builder’s Journey has a simple tale. Parent and child go on an adventure, they get split up – and you can predictably derive that the game ends when they reunite. The storyline isn’t profound enough for you to form any deep emotional attachments but it keeps the plot moving along and gives a bit more meaning to overall puzzle objectives.  A robot-like character is introduced midway that will help you in several stages and enables a different format of LEGO building which breaks the typical mould of hunting and placement of bricks. I do enjoy the depiction that the hero characters used are LEGO elements and not general LEGO Minifigures that we are familiar with. It brings a fresh new way to not be distracted by characters and focus on the task and gameplay at hand. The overall design of the game which breaks away from the traditional runabout adventure format is a bold move that paid off well. 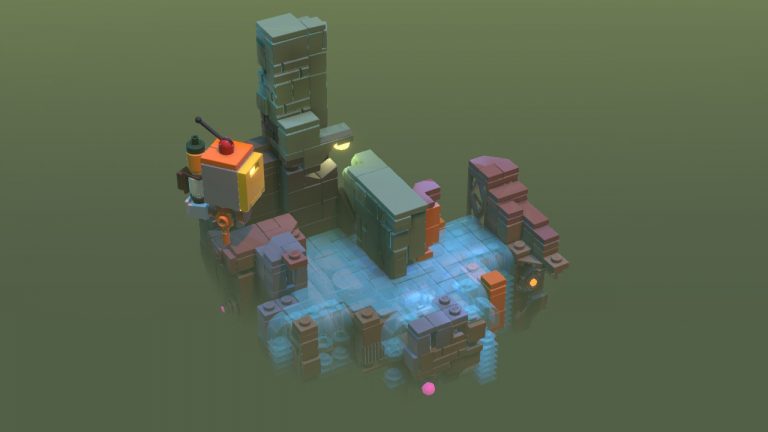 LEGO Builder’s Journey did somewhat find an initial audience by riding the coattails of another successful iOS game – Monument Valley. It’s been a consistent reference in terms of the ephemeral visuals and puzzles rendered in an isometric viewpoint. That’s where the similarity ends – and I was tempted enough to re-live some of the memories of Monument Valley to part with the $20 in hopes of a similar positive experience. If I had to score the game from a visual and aural on a scale of 1 (low) to 5 (high), I’d rate both be a high 4 for the way it was executed. Going from promotional videos featuring upgrades for the PC using Nvidia’s dedicated RTX gaming cards, it’s a clear winner. While the (lack of) graphic prowess of the Nintendo Switch, it still has the essence of a beautifully designed game with an atmospheric and dream-like world. The audio tracks that play in the background boast a pleasing set of soundtracks that matches the visuals and pulls you further into immersive gameplay. The unique and unmistakable sounds of LEGO bricks being put together and pieces falling apart with its precise ‘clicks’ gives a satisfying feel and brings back that all the good memories you love about playing with LEGO elements. 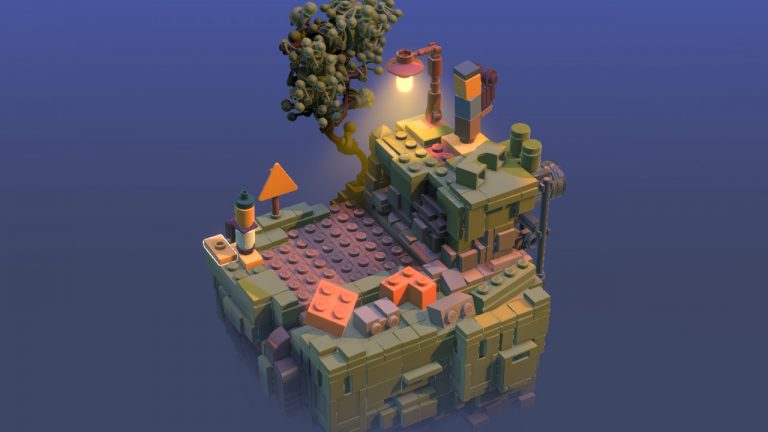 I used the Joy-Cons exclusively throughout the gameplay completion on the Nintendo Switch. There’s a fixed set of rotation direction and placement of the bricks which will eliminate any confusion on the placement of bricks. This is a relief as it gives a guided limitation of placement especially when one is used to the experience of having almost no limit with actual LEGO bricks. Having said that, while there are no ‘illegal building techniques’, a term used in the LEGO builders community where they are not forced to fit where it stresses joints,  it also means that the placement of the bricks sometimes don’t really mimic actual sturdy builds in real life – for example, placing a 4×1 tile with only a 1×1 stud connected to hold the piece together to form a bridge over a chasm. This someone goes against the grain of building with actual LEGO pieces. Having said that, once you get used to the idea of what the objectives of the game are, you start to get used to the in-game physics and focus on getting things done as opposed to building things right and proper. Upon completion of the game, I learnt that it had full input touch which means you can practically complete the game without using the controllers. Definitely a ‘duh’ moment for me considering the game started with iOS and had to have similar controls mechanisms implemented from the onset. I can’t comment about touch controls but can foresee that some of the puzzles and movements would be better suited for physical controllers especially when it comes to the accuracy of navigation and placements. The ability to interact with bodies of water gives when you touch them gives that added feel of realism (which you lose if you stay on the physical controller).  In general, the control system designed for the gameplay is well thought of and implemented using the Nintendo Joy-Cons. There was definitely a lot of thought process and care put into the experience – something which can make or break a game especially with janky control designs. 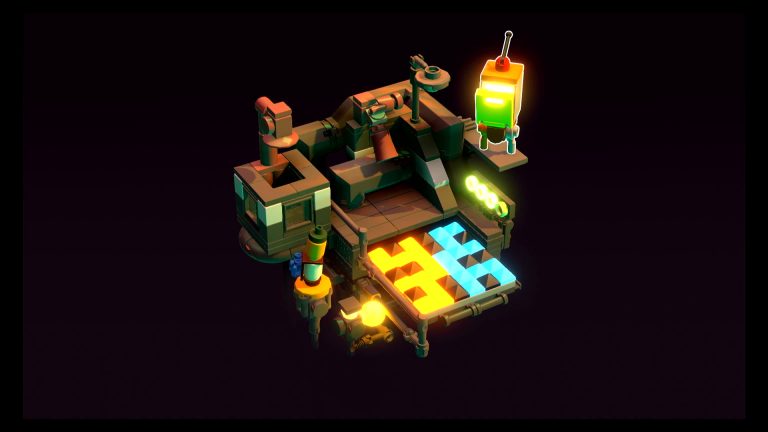 Puzzles and gameplay – room for improvement

The puzzles in this game is a mixed bag ranging from extremely simple and to a point of being obtuse and inconsistent in terms of flow. There are some which are prescriptive and must be completed in a certain approach to advance to the next level, and yet there are some that just are open-ended (non-prescriptive) that require placement of bricks in the most random manner to achieve your goals. There’s no consistency or gradient of difficulty as you progress through the game and learning one skill isn’t necessarily additive in approach towards the learning curve to solve another puzzle in the future. At times, but not very often – the cues and guides are sometimes not clear on what you need to do. Do I have to solve a puzzle or do I simply build bricks over chasms to advance to the next puzzle?  All this leaves the gameplay pretty flat throughout the whole 60 odd puzzles, missing out on the familiar gentle progression of difficulty as the game progress. Puzzles can sometimes be extremely easy, and at times at a loss of what needs to be done and simply experimenting with every item that’s movable to figure things out – somewhat random. As there are only a limited number of things you can do on a puzzle, you’ll eventually find out what needs to be done with a few extra minutes of persistence. If there’s one area of improvement, I’d say this is the area to focus on and fine-tune. The overall puzzle and gameplay experience is not stellar in any way. Having said all of that, this level of simplicity opens up the game to a younger audience who are excited about digital LEGO engagement as much as the physical toys they play with and will find the puzzle-solving easy enough for getting a sense of accomplishment for every puzzle solved. 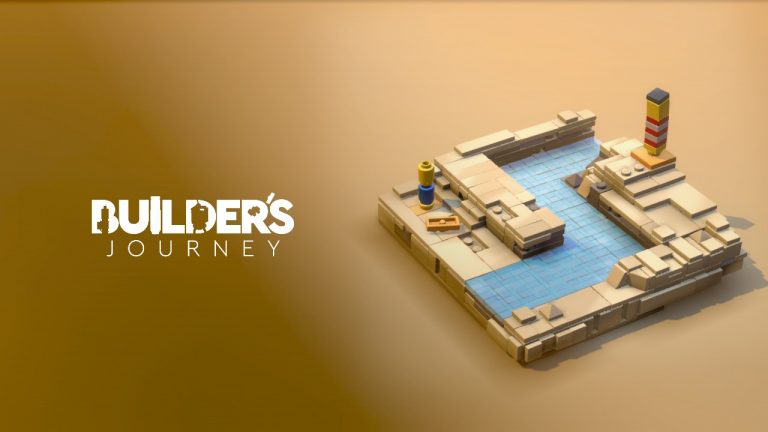 If you don’t consider the retail price tag (on the Nintendo Switch in the US market) in exchange for a 2 to 3-ish hour gameplay – LEGO Builder’s Journey is a clear winner. It breaks away from the familiar templates and presents LEGO gaming in a new format with great visuals and well-composed sound ingredients all coming together in an enjoyable package. Considering the original release had 35 puzzles, and by manual count, it’s bumped up to have slightly over 60 puzzles in total now which means there are at least 25 new puzzles and a reason for you to replay the game if you’ve completed it when it was first released on Apple Arcade. If you can wait for a discount – as most games on Switch go on discount eventually, that would be a wise financial decision. Kudos still needs to go out to the team at Light Brick for porting the game to the Switch and PC which is no simple feat that also requires a re-think and redesign of many other aspects including the touch or Joy-Con controls. The additional levels introduced and the re-engineering somewhat justifies the pricing for development costs which hopefully will bring us new games in the future from the Light Brick, but the length of gameplay still falls short.

Disclaimer: This review is not sponsored by The LEGO Group nor Light Brick Studio. I personally purchased LEGO Builder’s Journey for an adventure I wanted to experience.  I am not a gamer by any stretch and have only completed less than a handful of games over the past two decades. Considering the fact that I actually completed the LEGO Builder’s Journey, it is an achievement.