The Bits N’ Bricks Podcast continues celebrating the 25th anniversary of LEGO video games with two first episodes of season two already available online. The most recent episode went live just a few days ago on May 26th. During the Fan Media Days 2021, the Brothers Brick took part in an online session with the creators and producers of the Bits N’ Bricks Podcast and got an exclusive preview of what the team got ready in the following episodes. 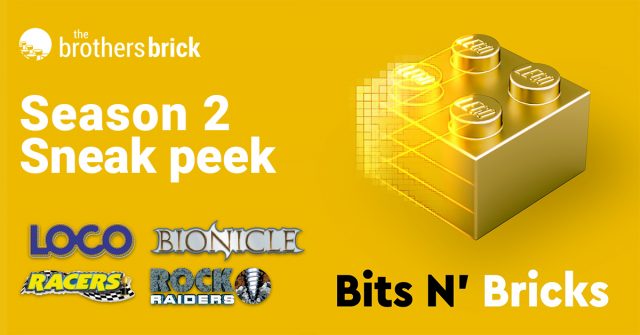 Bits N’ Bricks is a podcast created by journalist Brian Crecente and documentarian Ethan Vincent to celebrate the 25 years of LEGO video games. The podcast has been live since December 2020, with the first season covering many topics varying from more known titles like the video games made by TT Games to lesser-known ones like SPU Darwin and everything in between like LEGO Universe, LEGO Minifigures Online, and Builder’s Journey. Thanks to the overwhelmingly positive response from the audience, especially from adult fans of LEGO, the Bits N’ Bricks podcast was instantly renewed for three more seasons. As of today, the first two episodes of season two are already live. Brian told us that the following episodes will cover many fan-favorite topics, and the choice of the subjects was dictated by the feedback the team received after the release of the first season.

Brian Crecente: “As you can imagine, there were a lot of requests, and a lot of them were about LEGO Bionicle. So, that one is, sort of, deep in the production right now, and we hope to wrap it up shortly. Racers, LOCO, and Rock Raiders were also really big fan-requested titles.”

Although stories behind LEGO Racers, LOCO, and Rock Raiders will appear in season two, Ethan shared that the future topics have not been locked in as of now. This is because the team wants to give the audience a chance to have a direct impact on what topics are being explored in the podcast.

Brian and Ethan are the show hosts, but they also write the script and edit the audio. Dave Tach, the producer, listens to the first draft and expresses his opinions when the recordings and interviews have been compiled. They make the necessary changes and deliver it to Ronny Scherer, the executive producer, for further evaluation. When that’s done, Nannan Li, the associate producer, delivers it to the LEGO Group to be uploaded to YouTube and other podcast players as well as being promoted on social media.

The podcast is all about personal stories behind the famous titles. In the Q&A session, Ronny shared that Brian pitched to publish the best stories as a book, while Ethan, being a documentarian, proposed to make a documentary film. However, after another discussion with the LEGO employees, it was decided to celebrate the anniversary with a podcast since all the collected stories fit perfectly for the audio format.

Bits N’ Bricks Podcast will have three more seasons, with each season consisting of nine episodes. The final episodes will go live in December 2021, just before the New Year.