One of the most adorable sets to be released this year is LEGO Ideas 21326 Winnie the Pooh (available now for  US $99.99 | CAN $139.99 | UK £89.99 ) We did a lot of exploring in our hands-on review, but the Hundred Acre Wood is a big place. We recently had an opportunity to participate in a roundtable interview with both the fan creator Ben Alder and the LEGO design team who brought his idea to life. Come along as we learn insider info like the secrets behind Pooh’s balloon, the message hidden in the bee trails, and just where Christopher Robin got off to! 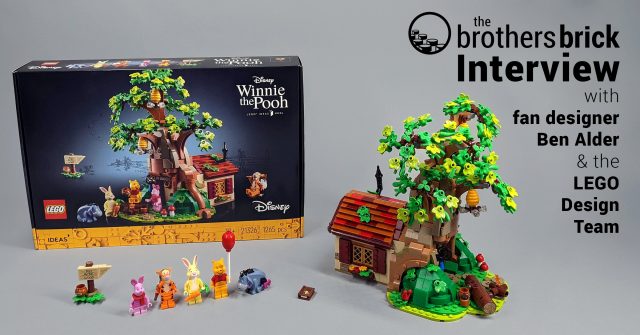 The roundtable was a fast-paced virtual meeting, with several outlets having the opportunity to ask questions of Ben and the designers. We’ve tried to identify speakers where possible, and the quotes have had some light editing for clarity.

We’ll start off with some questions asked directly to Ben Alder, the fan creator of the set.

Is the final set like you expected it to be?

Ben Alder: It’s beyond what I expected it to be. [It’s] every dream that I had, as I’ve worked with the amazing guys at LEGO to develop my “front room build” into that next level.  It’s absolutely unreal. I love everything about it. I love the build, and the detail in the figures, all the extra detail that they’ve added in. I love it. I’m so proud of it.

How much of the final set design process were you involved in? After having your project selected did you see anything before the set was released?

Ben: I genuinely felt part of the team. Obviously, as an outside person, I was involved in loads of different video calls.  They’d talk to me about the processes, and what was important for me in the set and what things that I would like to see. And, really, asking about my vision for the set and how I’d like my it come to life.

Right at the beginning, I remember having one conversation talking about what the minifigures were going to hold. And I remember the special day when it was announced that new molds were going to be made. That was a very special day; I never expected five new head molds.

It was actually like being part of the design team.  It’s a dream come true, really. I’m actually a LEGO designer! 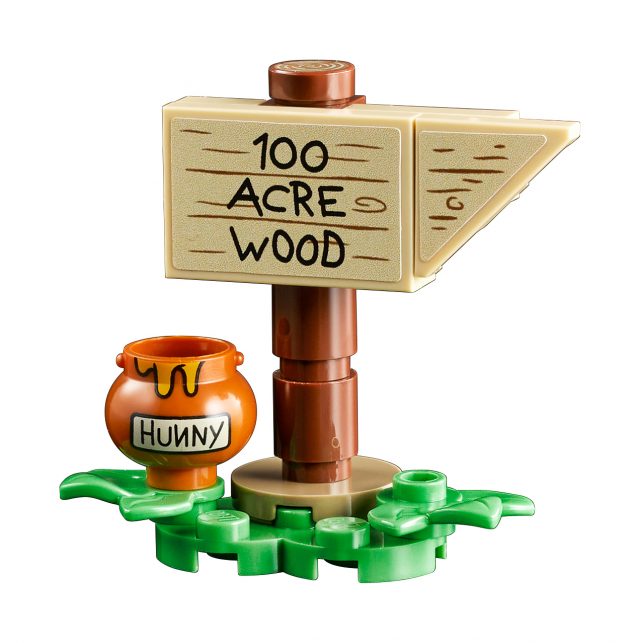 Of course, there were also plenty of questions about the minifigures. Everyone was curious as to the design choices that lead to their final appearances.

Why does Pooh have a crop-top instead of a molded piece that would give him a more realistic tummy?

Ashwin Visser, Graphic Design: The challenging part with LEGO is always 2D graphics that you know are going flat on the figures. There are limits to what we can achieve with [extra] elements to give them depth, and to give them volume.

Felipe Telles, Element Designer: It’s nice to have a more realistic figure. But also, those figures are so iconic. It is important that they can move their head and can be a bit more expressive.

Ilia Gotlib, Model Designer: Very, very often when you turn something into a minifigure you have to make some compromises to meet the standards and guidelines that we have. There are a few figures that do have things like a molded stomach, but then you can’t move the head. So we try, as much as possible, to maintain playability.

Why does Pooh have a brick-built balloon instead of using the one from the Collectible Minifigures line?

Ben: You can attach the brick-built balloon to the tree as well, without having to add some clear element on top of it. 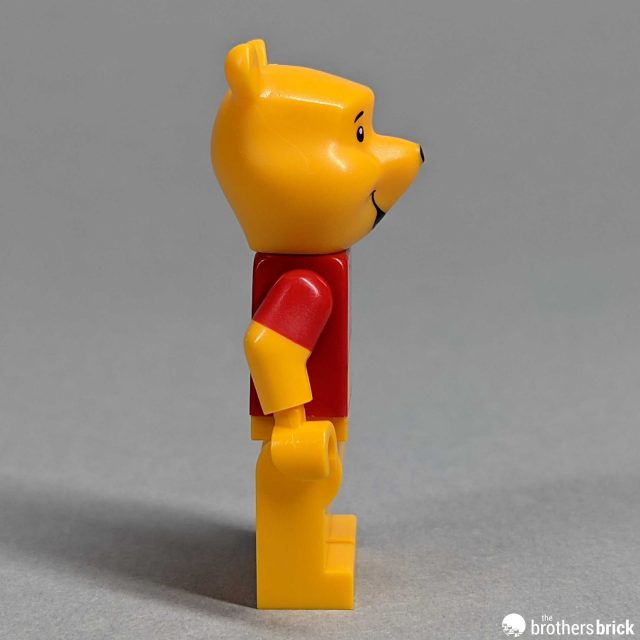 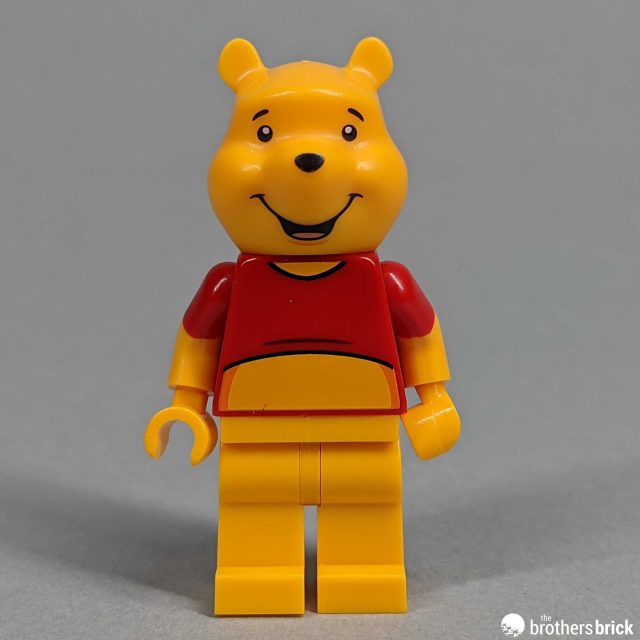 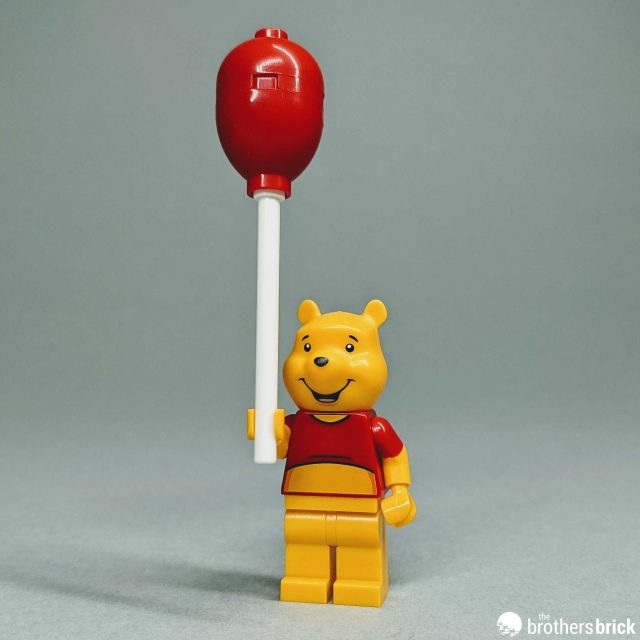 Why is Piglet the same size as the rest of the minifigures?

Felipe: For much the same reason as Pooh lacking a molded tummy. The play value is so much higher. He can hold accessories.

Ilia: We did explore Piglet. He wasn’t initially going to be a minifigure, he was going to be smaller. But you lose some of the iconicness of the character.

Felipe: When you see the full line-up of the characters they look really nice together. 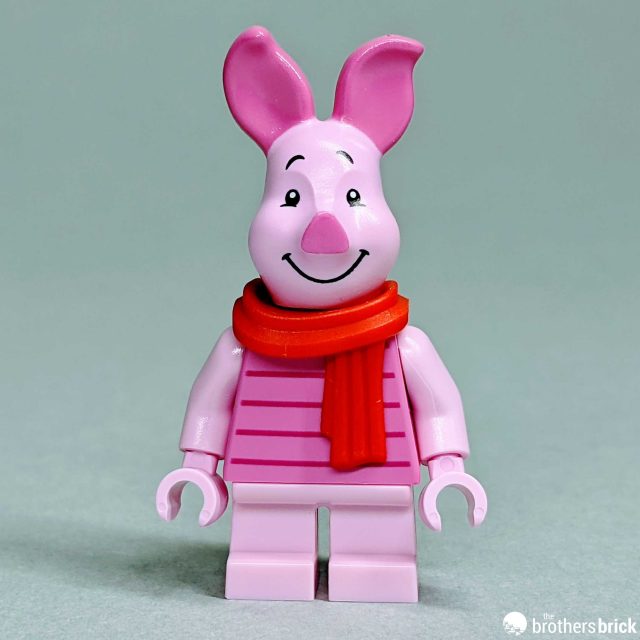 Did you consider alternate poses for Eeyore?

Simon Wilson, Sculptor:  There’s a lot of exploration on the figure as to what pose he’d have because he’s a brand new mold.  In the end we chose have him in his quite iconic, slumped sitting position. We thought that was a really strong icon for the character. There’s things like the size of the mold, and how to make that in the best possible way. How to add the play function with the accessory on the side. There’s lots of things to explore and a need to keep it in the LEGO system so you can build alongside with the other characters. So we, together with Disney, decided that this was the best interpretation of the character.

Ilia: We do have prototypes of other poses, though. Simon tried out other things!

Simon: (Jokingly) We’re saving those for the special edition. 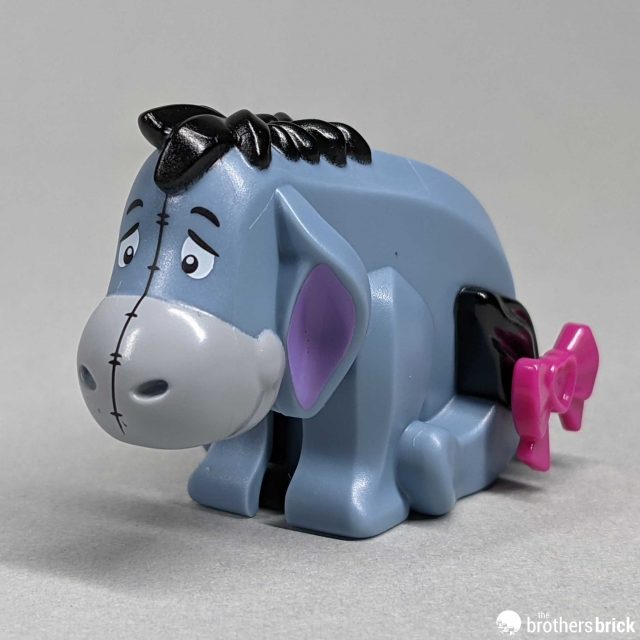 Ilia: We really pushed for him to be included. But there are limits to our budget, both in terms of how much we can put into the model and how many things like color changes we can put in. We just have to prioritize. In a lot of ways we felt that Christopher Robin comes across as whoever’s playing and building the set. You are Christopher Robin in that instance. He would have been amazing to get as a minifigure, but the ones that we did include were were even more important.

With regards to the set itself, the questions focused mainly on the build and part choices.

What can you tell us about the choice to use green coral elements for the tree’s foliage?

Ilia: We have a classic leaf piece that’s been used for a really long time, and to me it just feels a bit stale. As designers we always want to try out new things, to innovate and push the boundaries, especially with LEGO. We don’t have any other big branchy botanical elements. So [the coral branch] felt like a fun one to try out, especially because you get quite a few of them in the set.

Samuel Thomas Johnson, Design Lead: We were also putting this on the shelves next to the Tree House, and we didn’t want them to look similar. We wanted to offer a big, new LEGO building experience. 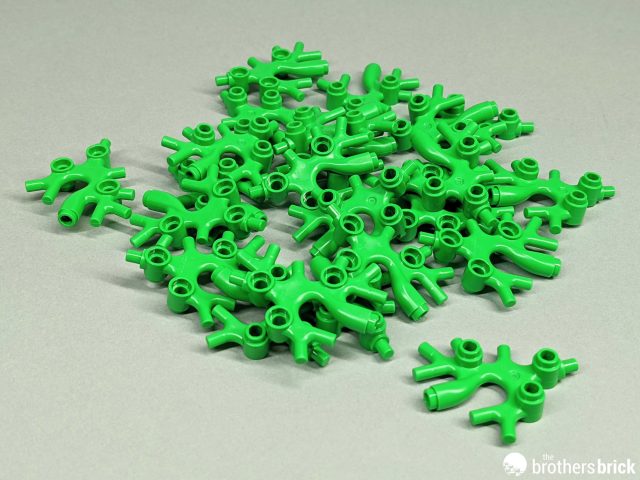 The “Hunny” pots are a great piece! What made you decide to print the design on them rather than using a sticker?

Ilia: The honey pot was one of the later inclusions. I mean we knew we wanted honey pots, but getting the decorated, printed one was a bit later on.  Near the end of the process.

Ashwin:  It’s almost impossible to use stickers on the honeypots because it’s such a curved element. So that was the main reason to include that as a printed part. That logic applies for the bees as well. We knew that stickering those round 1×1 tiles can be challenging (Laughs), so that was also just an easy choice to decorate those. 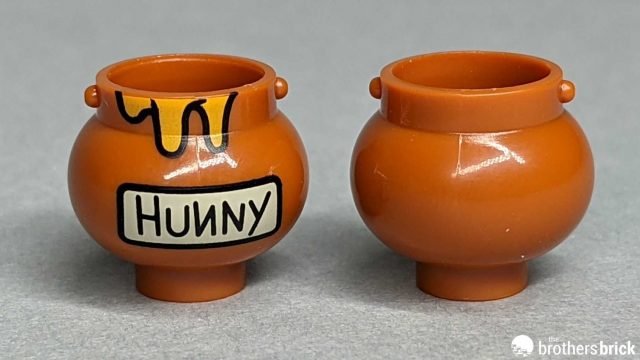 How did you decide on the look of the bees?

Ashwin: Like everything that we have in this set, there are a lot of references from the Disney archives. I was trying to get a good match between the source material and our own LEGO graphic DNA to come up with a bee design that could potentially also be used in other products. 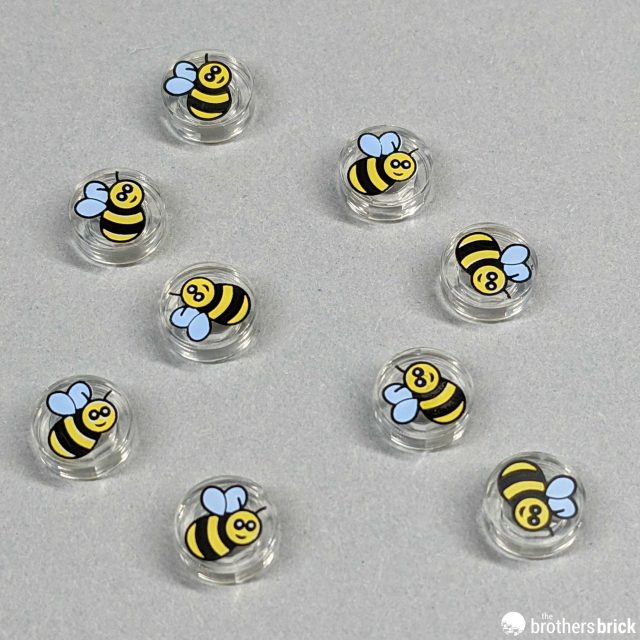 How much say did Disney have in the look of the set?

Ilia: They had a style for the characters, of course, and that’s where they had the most input. I think we have a good relationship with Disney, and we mutually understand kind of the aesthetic that we’re going for. So they definitely do have to input on everything.

Sam: As the owner of the IP, Disney is protective of the character and locations that are portrayed, particularly ones as iconic as Pooh. Of course, having worked with Disney for many years, the LEGO group and Disney have bigger partnership and understand each other’s styles. So they understand we need to make Winnie the Pooh a square minifigure. (Laughs)

Disney has also worked with LEGO Ideas, and they understand that we have our fan designers, like Ben, who have had the product idea.  And they respect that, rather than steamrolling it and saying we should make a different product instead.

For one of my questions, I wanted to see if we had missed anything special:

What Easter Eggs have gone unnoticed by the fan community up until now?

Ashwin: In the [purple] sticker with the bees, the trails they make are actually the initials of Ben’s children. And of course we have Ben’s name on the inside of the book. That’s a bit easier to spot. 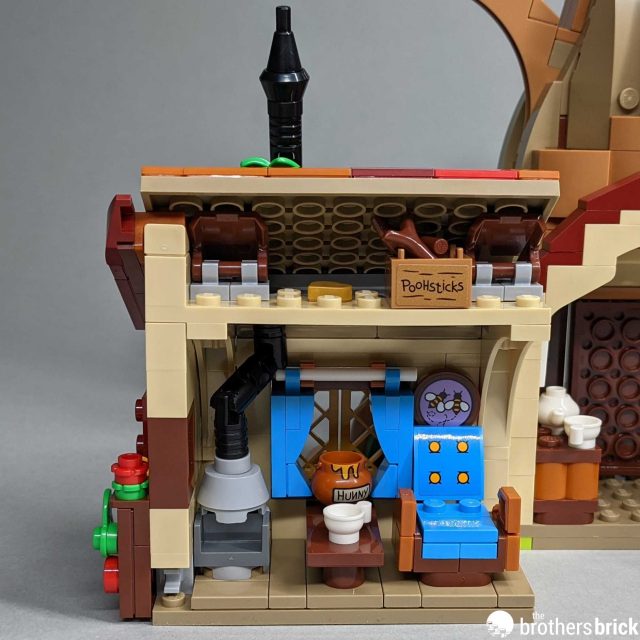 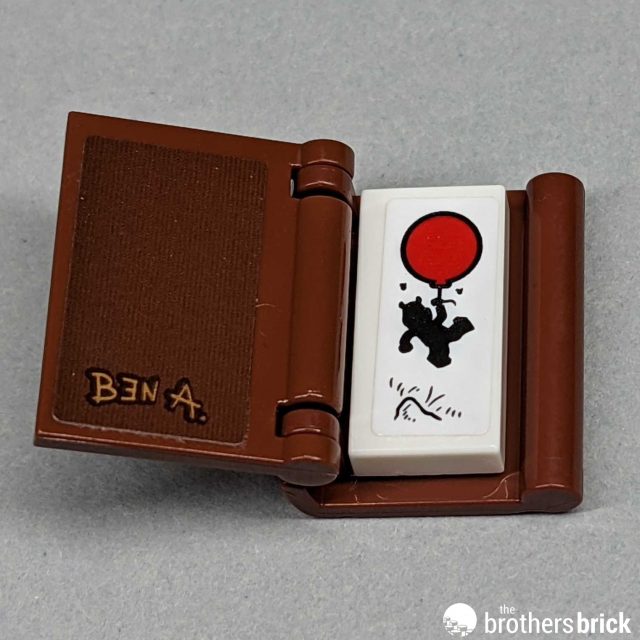 Ilia: We also have Tigger’s locket from the Tigger movie. That’s the gold heart tile in the rafters. Otherwise, like Ashwin said, we tried to put in as many references for Ben and his family as possible.

Finally, while there aren’t any announced plans to expand the Hundred Acre Woods just yet, there was naturally some good-natured probing in that area.

What location in the Hundred Acre Woods would you like to see next?

Ben: For me it would Owl’s House. I just love how his house is in the middle of a tree, and I think you could really expand on what stories you could tell. And my boys made Eeyore’s house as well, so we’re slowly building up the forest.

Ilia: The other location maybe could be Rabbit’s house, and have Pooh stuck in the entrance.

Sam: We always hope, and LEGO Ideas can open the door. This is maybe the start of something great. 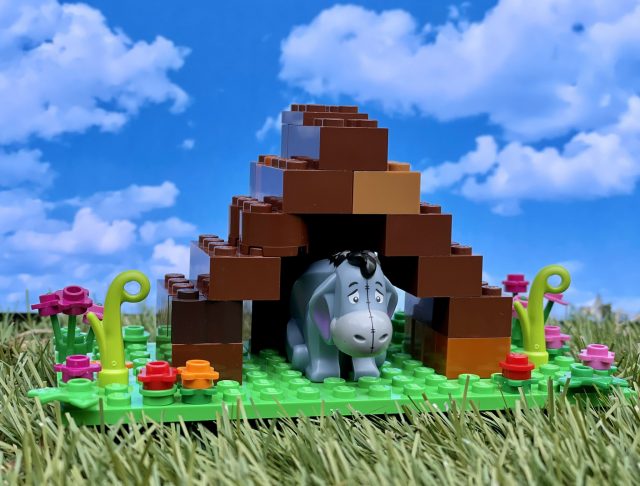 Our thanks to LEGO, and especially Ilia Gotlib, Ashwin Visser, Felipe Telles, Simon Wilson, Samuel Thomas Johnson, and of course Ben Alder for giving us this peek behind the curtains! And be sure to check out our hands-on review for even more sweet details.

3 comments on “Exploring the Hundred Acre Woods: An interview with fan designer Ben Alder and the design team behind LEGO Ideas 21326 Winnie the Pooh [Feature]”