We’ll have to wait until July 2021 to see Minions: The Rise of Gru in theaters, but in the meantime we can at least play with the LEGO sets. We’ve already taken a hard look at 75549 Minions: Unstoppable Bike Chase and found a lot of problems there. But what about the other currently available offering? 75551 Minions: Brick-build Minions and their Lair retails for US $49.99 | CAN $69.99 | UK £44.99 and spans 876 pieces including three Minion minifigures. That sounds pretty good on the surface…but is it? Let’s find out! 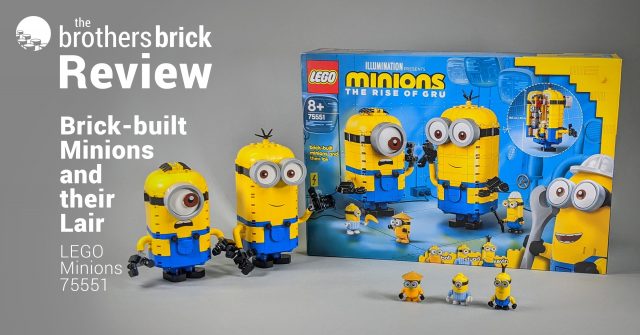 Things start off innocently enough. The box art is pretty straightforward, leaning heavily into the blue and yellow Minions color scheme. Brick-built Stuart and Kevin “big Minions” are shown, along with the three minifigure-scaled Minions. The back of the box showcases that you can rebuild Kevin into a third Minion, Bob. I think it was a good call to “hide” this feature on the back. Having all three big Minions shown on the front would probably have lead to some irate calls to customer service when they couldn’t all be built at the same time. (I’m sure LEGO is going to get similar calls with the “you can build ONE image” art sets, even with the big disclaimers on the front of the box.) 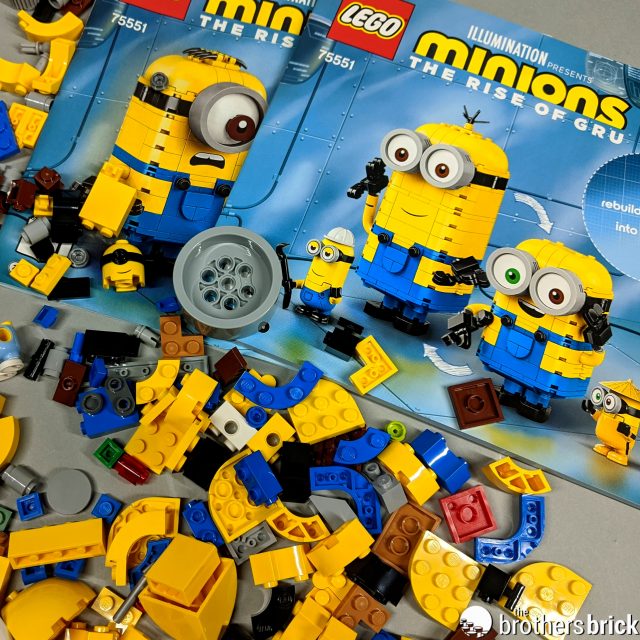 Inside the box are five sealed part bags. Interestingly they’re not numbered 1-5 but rather grouped into two batches of “1” and “2”s. I also had a small issue where a smaller interior part bag was heat-sealed into the edge of one of the larger “2” bags, but that was likely just a fluke. 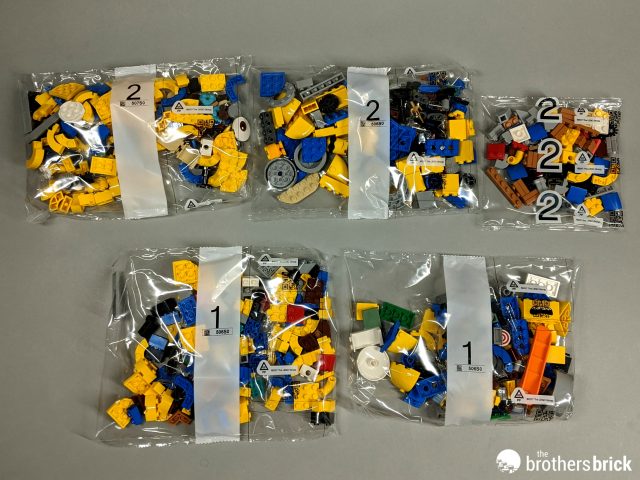 The instruction books are also a little off-standard. There are two, a thin 60-page book for Stuart, and a square-bound 124-page book for the Kevin/Bob 2-in-1 component. Both are loose in the box, and my Stuart-book was a bit worse for wear. There’s also a sticker sheet that luckily arrived without damage. LEGO has been starting to put the manuals/stickers into shrink-wrapped bags in other sets; I hope we see that happen more often in the future. Particularly for any set over the $30 mark. 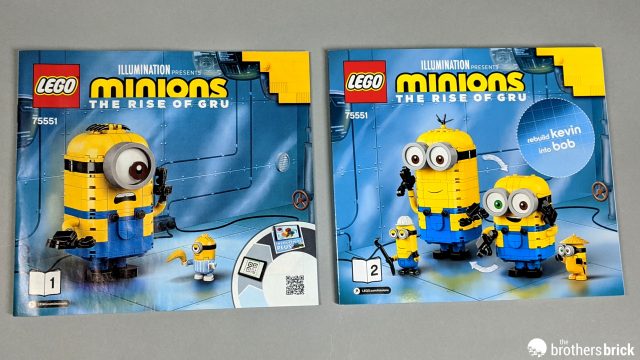 One of the big draws for this set is the tons of new and useful parts it offers. Well, “tons” if you’re building things in a yellow or blue color scheme, anyway. But let’s start off by looking at the two winners in light grey. First is a 4x4x1 round-rimmed System element from the Kevin/Bob build. The second is a 5x5x2 Technic wheel from Stuart’s eyepiece. Both parts will likely be in high demand in the future, and both are unique to this set in grey. (The smaller wheel shows up in red in 43179 Mickey & Minnie Mouse Buildable Characters.)

We also get a couple of brand new 3×3 corner plates in blue and yellow. You get 12 of the blue and 4 of the yellow. There are also a number of printed round “eye tiles”. Stuart has a 2×2 brown disc, and Kevin and Bob have brown and green eyes on a white 3×3 round tile. Unsurprisingly, all are unique to this set, too.

Speaking of Minion facial parts, this set also includes three printed panels, each with a different expression. These are also parts that might be hard to re-purpose, but I’m glad they didn’t go with stickers here. 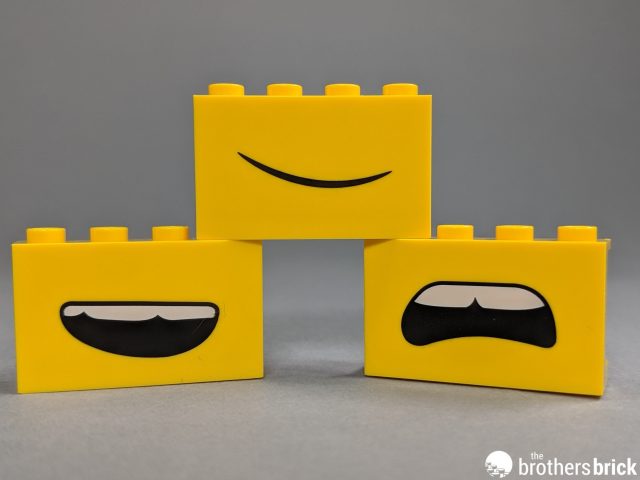 Finally, we get some new minifigure parts to make up the minions. There are three different Minion heads and three bodies, as well as some 1×1 round printed tiles for the eyes. (You can see those in the completed minifigure photos, below.) The arms are removable, but it’s going to take some clever building to make use of them elsewhere.

The first “big Minion” in the set is Stuart. The exterior of the build looks great, with clean lines and very few exposed studs. If you know your Minions, you know who you’re looking at. If you don’t know all that much about them (like me) you can still enjoy the fact that these things are just adorable. The big googly eye is just fun. The arms, hands, and fingers are all poseable, too. 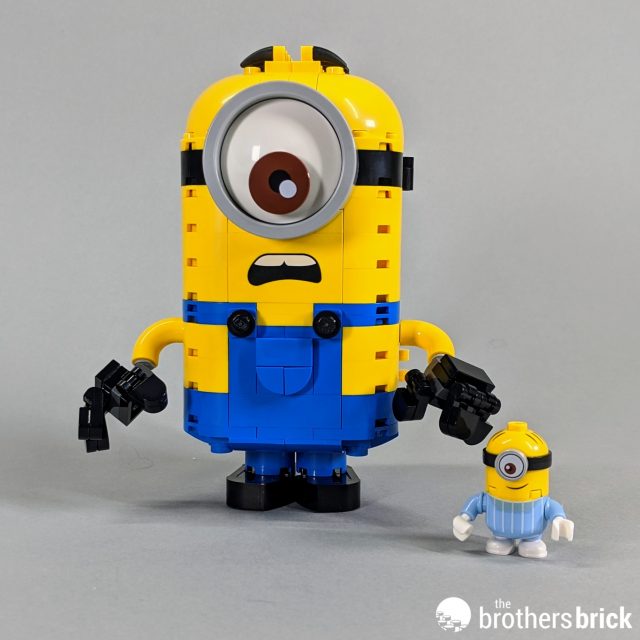 Each of the big figures opens up to reveal a play area. I’m guessing this will factor into a plot point in the movie somehow, as giant Minion mech suits seem like a pretty fun moment to have. The Stuart minifigure comes dressed in PJs, ready for a good night’s sleep. That’s convenient, as the interior seems to be based on his bedroom. There’s a retractable Murphy bed, stereo, and dartboard. There’s also a boomerang in tan, a new color for that part. There are also a few stickered parts, including the nameplate along the top and a rotating knob.

The main play feature is revealed when you twist that knob: It spins Stuart’s eye around. Depending on how you’ve attached the 2×2 round tile, this can either be kind of subtle, or really dizzying. It’s kind of hard to turn the knob easily, but the gearing is pretty simple/solid and should hold up to extended play.

Next up is Kevin. While the tallest of the three buildable Minions, he still has the same basic lower-body design as Stuart. There are a few more exposed studs at the top of his head, where you’ll also find a new black version of the plant stalk as hair. The minifigure sized-Kevin has a different (and new) plant stalk tuft. 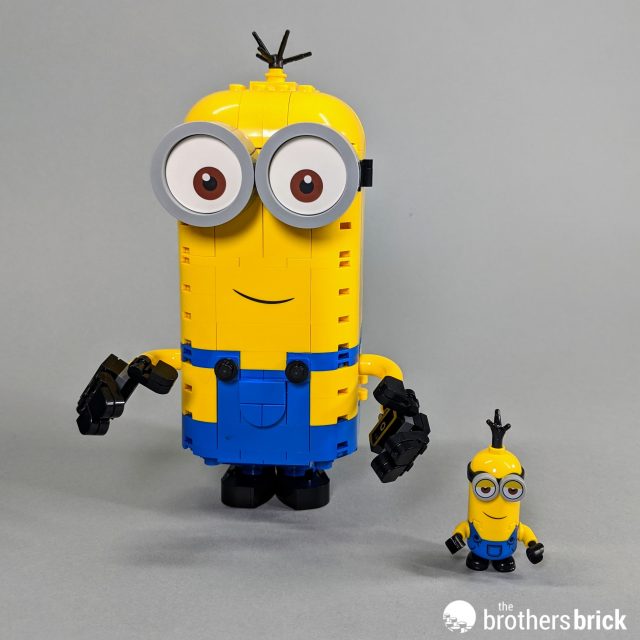 Kevin’s interior is a swanky control room, filled with monitors. There are a LOT of stickers here. The cost of printing all of these screens as single-use elements would have really upped the price of the set had they gone that route, though. So no real complaints here.

Kevin’s eye roll works similar to Stuart’s, with the knob at the top of the interior driving the motion. The gearing is obviously a little different as it spins two eyes instead of one, but again it’s solid and should hold up to play. I added a few bricks to extend the knob and make it easier to turn for the image here.

As mentioned earlier, Kevin is part of a 2-in-1 build. When you’ve completed his model there are a handful of extra parts to keep track of. Speaking of that: The printed mouth panels are great, but it would have really nice if they had designed the big Minions so that the expressions could be easily swapped out. As it stands, you have to mostly dismantle the entire head if you want to change the mouth. If you want to know why I bring this up, let’s just say Stuart is more cheerful in some of my photos than the instructions mandated. 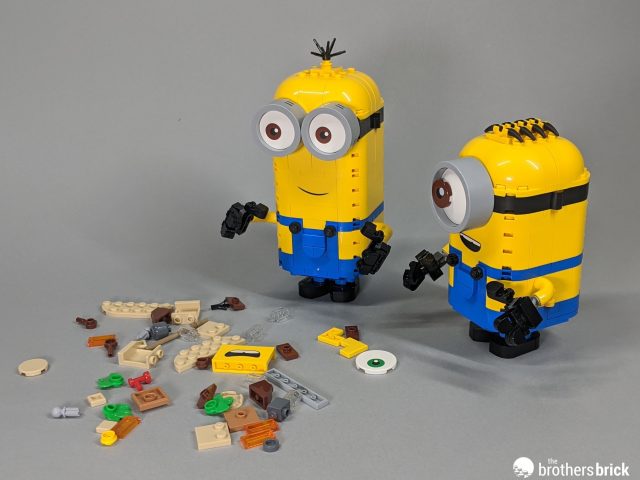 The first thirty-two steps are identical between Kevin and Bob, but then things diverge a decent amount. Bob is a much smaller creature; three bricks shorter than Kevin and a brick shorter than Stuart. And, if you somehow didn’t notice, he also has one green and one brown eye. His minifigure version comes in a Kill-Bill style tracksuit with a snappy straw hat. 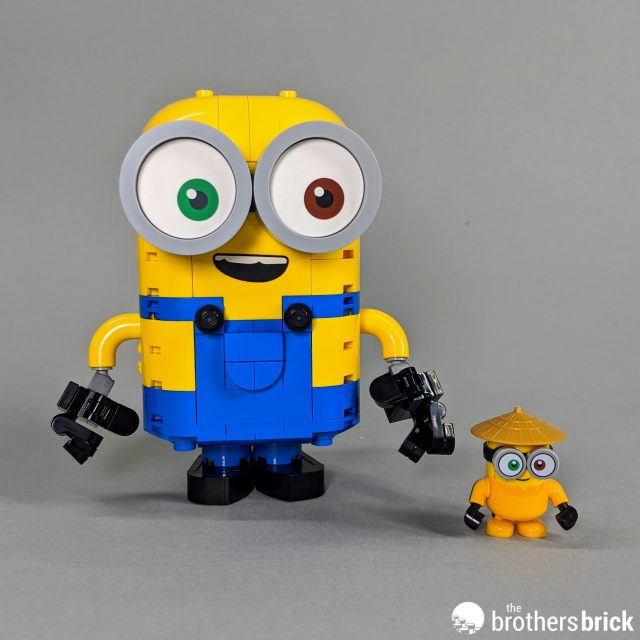 Like the minifigure, Bob’s interior is all about martial arts. There’s a training dummy, weapons, and even a touch of greenery on the walls. The same twisty knob rotates his eyes. It’s the same build and functionality as Kevin’s.

Since Bob is so much shorter, there even more pieces left over once you complete this alternate build. While parts of the construction were nearly identical, you still need to take each model almost entirely apart to swap between them. I think that’s a positive feature; you get a sense that there are really three different designs to explore. 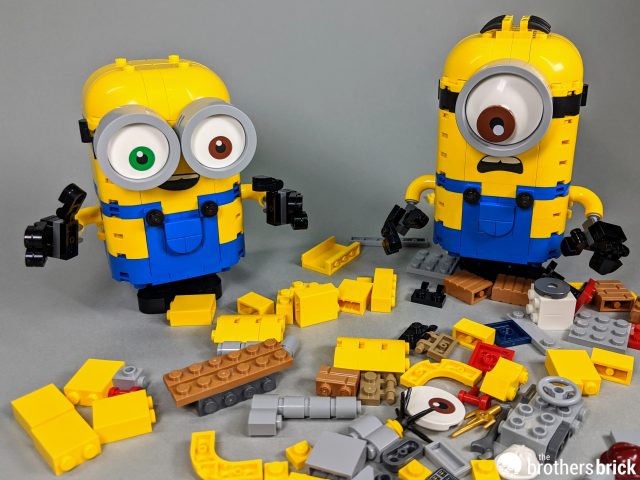 We touched on the minifigure version of the Minions above, but it’s worth highlighting them again. All three are unique versions to this set, and the mix-and-match nature of the parts means you can create several different looks for each. There are extra accessories for each scattered throughout the builds, so there’s plenty of play to be had. One thing I did notice is that in all the product shots Kevin’s hard hat sits neatly atop his head. In reality (and in the instructions) you have to add a 1×1 round plate in between to have it stay on. It creates a very visible gap. So I photographed him here without it, as I was feeling generous, and as it looks pretty stupid with it. 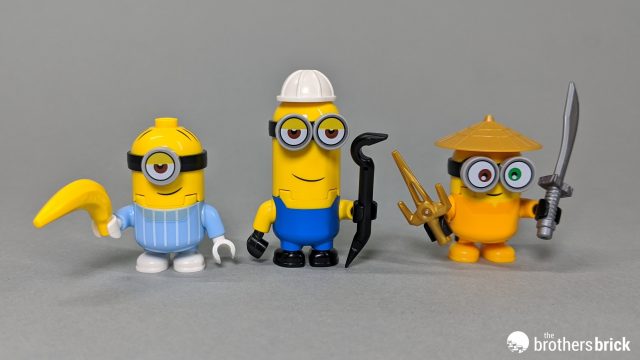 On second thought, let’s just call out this non-good-look with a big photo. You’re welcome. 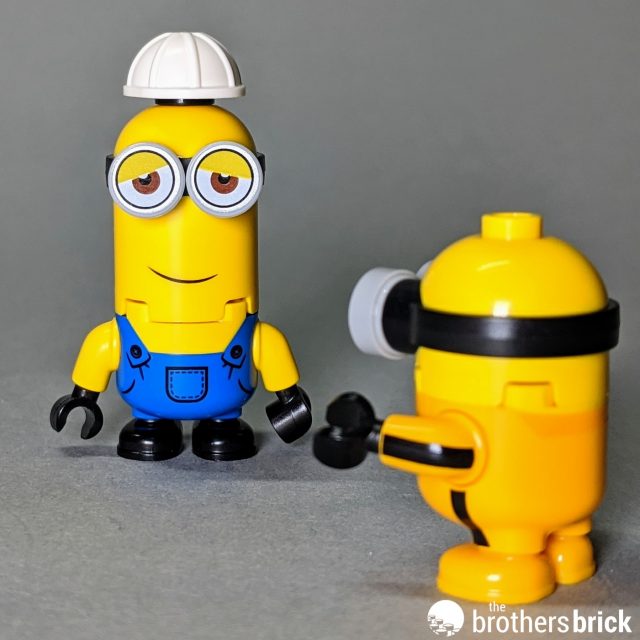 Without hats/accessories, you can get a feel for the basic look of the Minions. I think LEGO did a really good job with these guys. New molds for parts don’t come cheap, but I’m guessing brick-built Minions at this scale would have looked pretty poor. 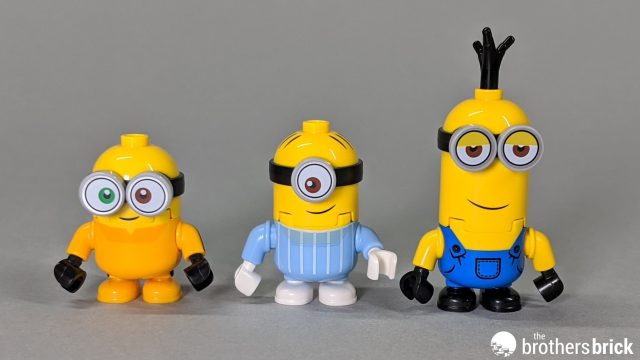 This set was a positive surprise for me in many ways. The problematic 75549 Minions: Unstoppable Bike Chase came in at nearly 15 cents/part, which made me a bit nervous when I started to run the calculation for this set. But at 876 pieces for just $49.99 US, this set shows an amazing difference at under six cents a piece. That’s a great value for anyone looking for parts kits and, as noted above, there are a lot of great new elements and recolors to be had here. And all the builds are fun and character-accurate. The play features are well designed and just the right level of goofy-cute. Pretty much a “win” on every metric. Without the movie out to support it, this set may end up in a lot of clearance bins. If that turns out to be the case, you may even want to consider multiple copies of this one.

4 comments on “LEGO 75551 Minions: Brick-built Minions and their Lair [Review]”