Here at The Brothers Brick, we’ve explored all the summer 2020 Ninjago sets…all but one, that is. There…lurking in the corner…it’s 71710 Ninjago: Zane’s Mino Creature. And, spoiler alert, this one is a little different from the rest of the wave. Part of the “Game Experience Inside” group, this set has odd build choices that make it feel like either an early version or a late addition to that sub-theme. Available now for US $49.99 | CAN $69.99 | UK £44.99, is this 616 piece set worth your time and money? Read on and see! 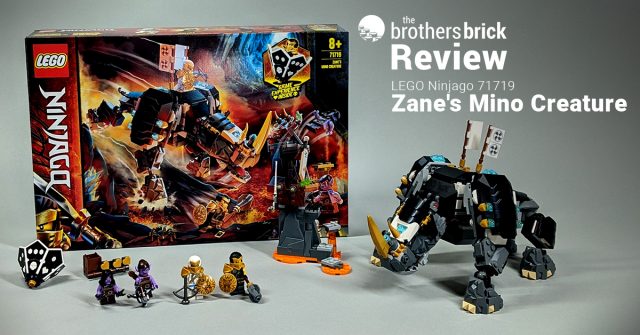 The box for this set is pretty standard for the summer Ninjago line. The art is eye-catching, but you have to look at the back of the package to figure out what’s actually included. That turns out to be four minifigures, the Mino Creature, and a small playset. Those are packaged across five numbered part bags, with an additional sticker sheet and 172-page instruction book. There’s also a flier that gives some additional information about the “Game Experience”. (See our review of the Skull Sorcerer’s Dungeons for an overview of the gameplay aspect of these sets.) We’ll be looking at how this set fits into the game world as we go along. 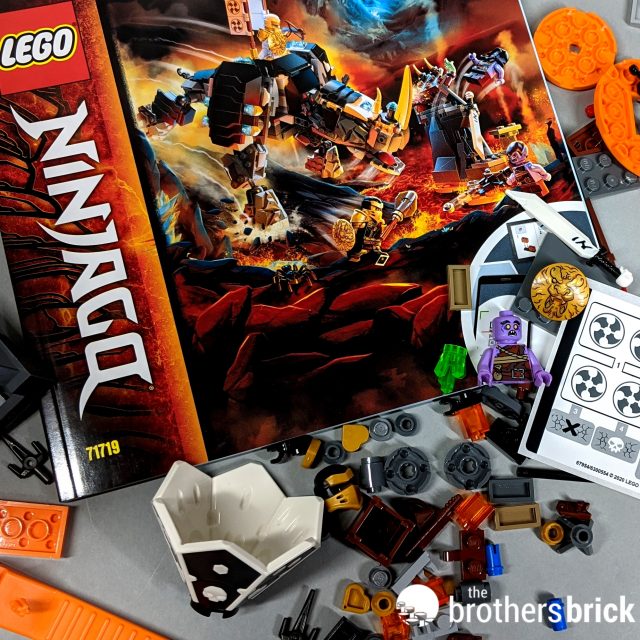 On the parts front, there are a few gems to be found. We’ll start out with some new ones that also appear in other summer Ninjago sets. First, there’s the The Ivory Blade of Deliverance, one of the two “Swords of Destiny” from Ninjago Season 13. On the defensive side, there’s this golden dragon shield. This set comes with two, one for each ninja. There’s also the spinner, part of the game aspect.

As far as unique parts go, this set includes eight of the new ridged plate in black. There’s also a unique printed 2×3 tile with the creature’s eyes on it. New-but-not unique are gold versions of the modified plate with rod, a transparent bight-green flame element, and a gold 1×1 heart shaped tile.

Moving on to the completed models, the first build in the set is a small play area. Part of the “game experience,” it has arrow stickers to indicate the direction minifigures should move along the spaces, as well as a skull sticker showing where a bad guy should be placed. An “X marks the spot” sticker appears next to the Ivory blade. As builds go, it’s not too bad, but we get our first hints that this set still has some early game mechanics versions. In particular, the “adventure paths” in the other game sets all have “clip and rod” connection points at either end. This allows for the sub-set to be integrated into a more extensive board game journey. Here, it looks like the connection points were cut for cost savings. Or maybe the design of this set was finalized before the game mechanics were fully developed. Regardless, this little bit of “path” is more of an isolated oasis of adventure.

The other indicator that things weren’t quite done cooking is the “loot crate” figure stand. In the other three sets, there’s a standard design and build for these: The crate is on the right, and the figure connects to jumpers connected atop a stack of three plates. Here the crate is on the left, and the jumpers are built into the third layer of plates. It’s still a functional design, but it feels…off somehow. There’s no reason for there to be a variant figure stand design.

Regardless of the strange game tie-in quirks, the star of this set is clearly the Mino creature. This vaguely rhinoceros-like beast is a hefty build. The colors here match those of Zane, the ice ninja, with splashes of white and transparent light-blue elements. There are also some stickered flags in the saddle area that, I’m told, tie in thematically with throwing stars, Zane’s weapons of choice.

The articulation on the creature is a little weak – the front shoulders and elbows are locked off with Technic bracing and can’t move at all. You can pose the back legs, and all four feet are attached with ball joints. This allows for a bit of stability when displayed on an uneven surface, but action poses are limited. 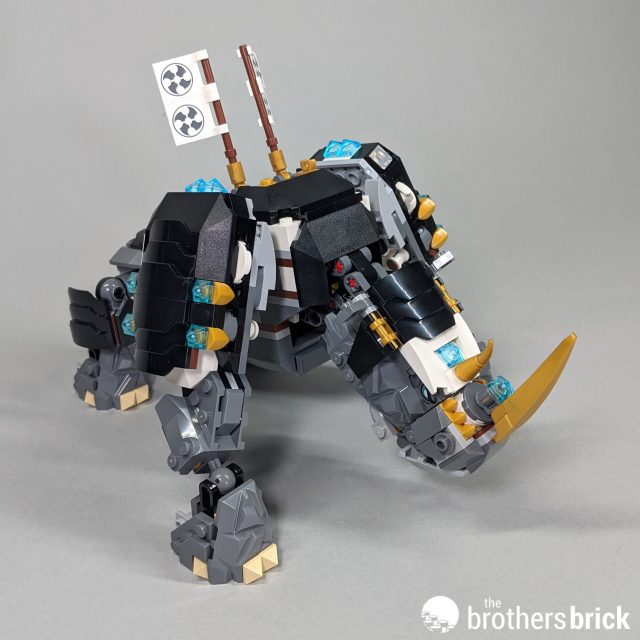 The detailing on the build is really well done. The new printed 2×3 tile with the creature’s eyes has an interesting twist. Rather than printing up two different designs, or making a generic eye design that would work facing either direction, LEGO instead hid one of the eye prints under a decorative rock element. Thus a single new printed part works for both sides of the head. Pretty clever, I must say.

Sadly, less clever is the design of the creature’s lower jaw. It’s articulated to provide some character, but the hinge feels like it’s too far forward, making the open-mouth version feel a bit distorted. There’s also a fair bit of exposed Technic gearing for the play feature that could have been better hidden. I do like the dark red boat tile for the tongue, though.

This set comes with four minifigures. None are exclusive to this set, but all are new to the summer 2020 Ninjago wave. Ninjas Zane and Cole are here in their “Hero” variations, as are bad guys Gleck and Ginkle. All have dual-sided torso and face prints, and the ninjas have printed legs, too. The two bad guys are identical except for their hats and accessories, which seems like another cost-saving move on LEGO’s part. It would have been nice to at least see a different expression or torso print between the two. 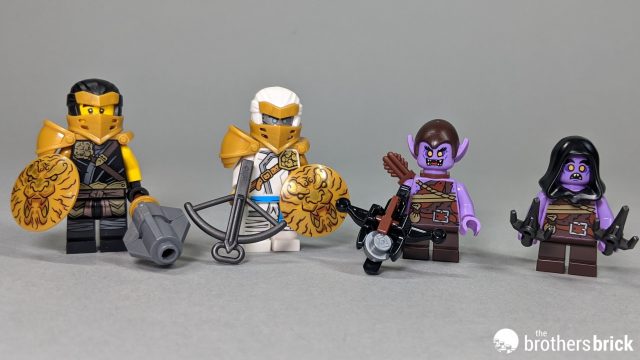 As mentioned earlier, the “adventure zone” for this set doesn’t connect to the other game sets. By itself, it’s still a decent little build with some good interactivity. There’s a problem with the step you’re supposed to pose the baddie on, though. If you attach the figure to both foot studs, they face into the wall, rather than facing the oncoming ninja. You can get around this by twisting the figure stand around, but even then, they’re aiming off to the side. Attaching the figure by one foot works a little better, but it feels like another indicator that this set wasn’t quite done when it went out the door. 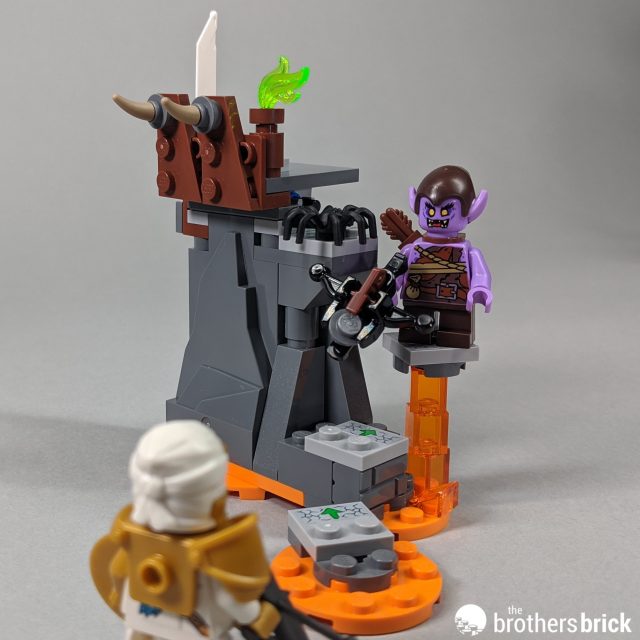 What does work, and work well, is the trapped platform that guards the Ivory Blade. It tips easily and adds a nice bit of play right at the climax of the mini-adventure. I mean, right before the ninja have to figure out how to grab hold of the Ivory Blade when all they can reach are the sharp parts. Hey, no one ever said the bad guys had to make things easy. 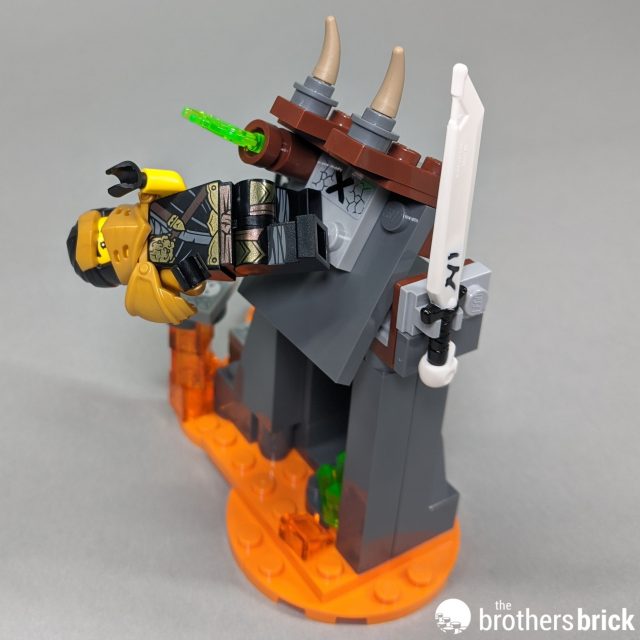 There are a couple of minor play features on the creature, too. There are clips in the saddle area for Zane to stash his weapons, and the placement makes for a nice mount for his crossbow. There are also disc-shooters built into the front legs. The white disc and trigger bar feel like they’re just part of the leg design, making a surprise attack feel more…surprising, I guess.

The main play feature is the creature’s head-smash function. By pressing down on the middle of the creature’s back, the head swings up and forward. For instance, let’s say Zane has been chasing Ginkle and finally has him in trample range. 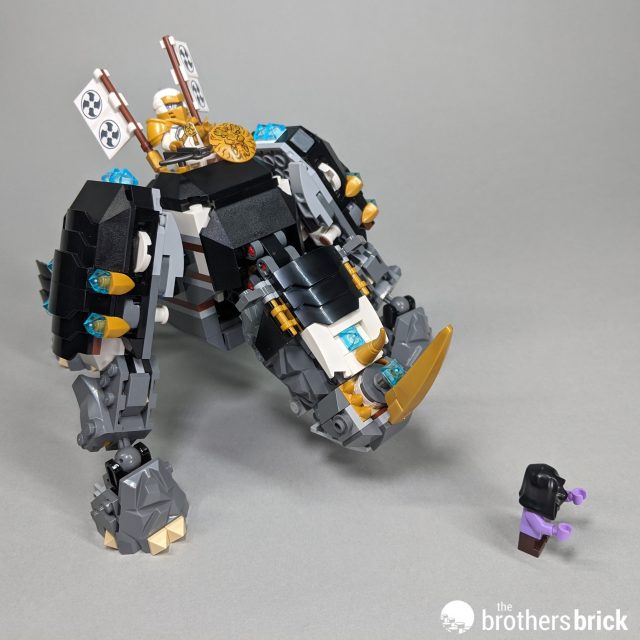 But why grind this small purple baddie into a paste under the creature’s hooves when you can just send him flying? It’s much more fun. And probably less likely to cause problems with keeping a kid-friendly TV rating.

At $49.99 US for 616 pieces, this set comes in at just over 8 cents per part. This makes it one of the more expensive “part kit” Ninjago sets in this wave, but still a decent value. There are four minifigures, a bunch of rare and unique parts, and a reasonably fun build. Less great is the feeling that this set isn’t quite finished, and that it doesn’t really fit into the “game experience” sub-theme well at all. For me, this one is the least attractive of the summer sets. It’s still good, but it pales in comparison to the Fire Stone Mech or Wu’s Battle Dragon. But maybe this creature will be a key player in Ninjago series 13 and become a huge fan-favorite. Or maybe it’ll be a better pick for someone more into Rhinoceros creatures than I am. If that’s you, sound off in the comments and change my mind. 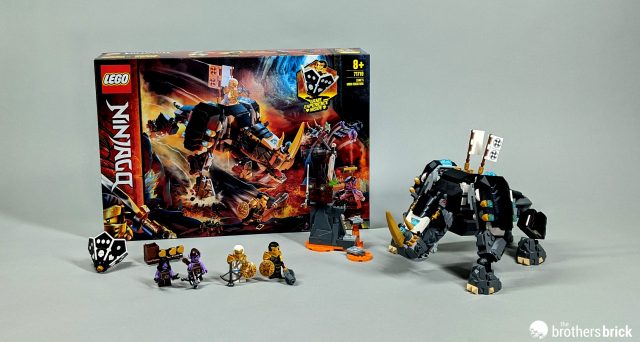 Check out our full gallery of images.