My hair may be turning grey, and I have a job, a professional reputation and responsibilities, but hidden just under the surface is the same six-year-old boy who marveled at his first LEGO fire truck, back in the eighties. With the pandemic, for many of us, the last few months probably haven’t been easy. For me, personally, things could be a lot worse. I am healthy and so are my loved ones, I have job security and can work from the comfort of my home. Nonetheless, I am stressed by the uncertainty and by a never-ending amount of work, in combination with not being able to do many of the things I usually do to relax, such as traveling, meeting friends and attending LEGO events. 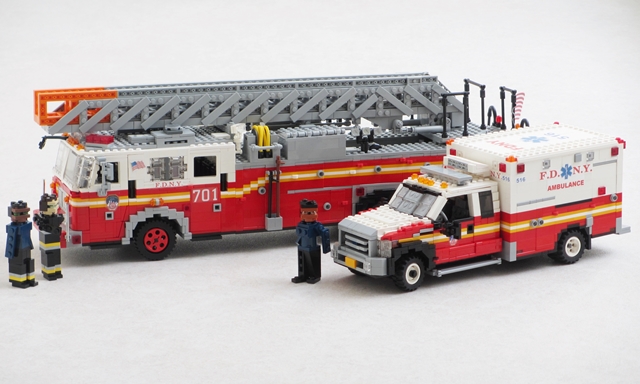 One thing that does help is being able to channel that six-year-old. I pop up to my loft and put some LEGO bricks together almost every day. And what does my inner six-year-old lifesavers? Well, fire trucks, of course. With a few decades of building experience under my belt and an adult’s disposable income, they’re obviously going to be elaborate. This pair of vehicles represents a Seagrave ladder truck and an ambulance, as operated by the New York Fire Department (FDNY). They are life savers in a real-world sense, but building them also kept me from going nuts. 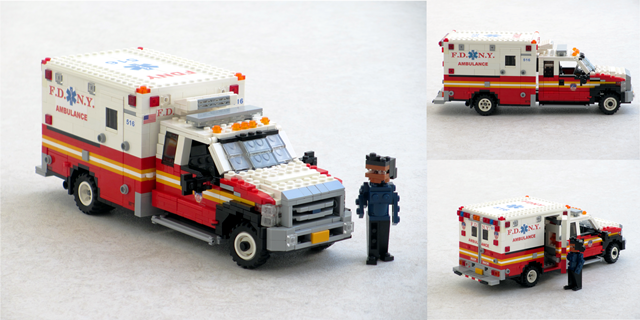 The ambulance is a partial rebuild of an older model, but we never featured any of the earlier versions. The FDNY uses ambulances based on pick-up trucks. My model also started off as a regular pickup truck, and I subsequently rebuilt it as an ambulance. In recent years the FDNY has started using vehicles with extended cabs, so last week, I rebuilt mine again. It has a new front and a longer cab, and I changed the details to represent the newer version. I also added a new paramedic figure to represent “New York’s Best.” These people were in the front line when COVID-19 hit New York. 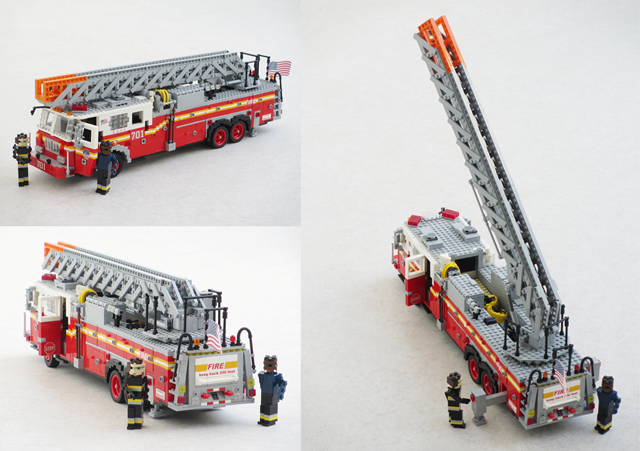 To those of you who are long-term readers of The Brothers Brick, the Seagrave ladder truck may look familiar. An earlier version appeared here all the way back in 2008. Unlike some of my helicopter models, which I’ve been rebuilding almost from the ground up, it hasn’t changed all that much. The model is so old that the FDNY has retired its real-world counterparts from regular service. The ones left are used by reserve companies or as spares, to temporarily replace trucks that are under repair or undergoing maintenance. During an earlier rebuild, I already replaced the yellow with bright light orange. During the latest update, I gave it a new windscreen. I also shortened the cab and tidied up some of the details. The FDNY’s ladder trucks typically have signs attached to their ladders that show which ladder company operates them. The reserve trucks don’t have those, so all of the girders on their ladders are visible. This meant I had to rebuild the ladder on mine. Mathematics nerds (much like me) might appreciate that I built the girders using Pythagorean triples. A right-angled triangle with sides of three and four units long has a hypotenuse (the diagonal) that is five long. That means that the outer studs of a six-long LEGO plate (on which the centers of those studs are five lengths apart) can be used to build triangles that fit perfectly onto a rectangular grid.