Some LEGO fans primarily collect sets; others focus on building their own creations. I’m very much in the latter camp. That doesn’t mean I don’t collect anything LEGO-related, though. I don’t just build for the sake of building and sharing pictures on-line. Most of my models fit into collections, like my Japanese cars, that I display at shows. Because they are part of a collection, I tend to keep them around for a long time. However, as a result, by now some of my vehicle models are so old that their real-world counterparts were retired years ago. 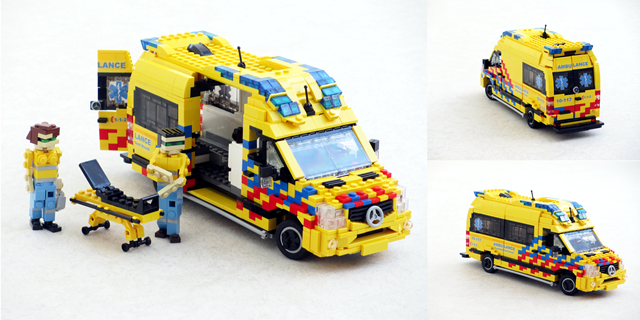 Case in point: the Dutch Chevrolet Express Ambulance that I built in 2009, as part of a collection of Dutch emergency vehicles. If I were to display this at a show, some of the children there might not even recognise that an ambulance used to look like that. So, even though there aren’t any shows in the foreseeable future, due to the pandemic, I felt my Dutch LEGO paramedics could do with a new set of wheels. The current type in North Holland, where I live, is the Mercedes Sprinter. All its doors, including the sliding doors in the sides, can open, to give access to a detailed interior. The lights on the roof have a snazzy aerodynamic shape, which was fun. I particularly enjoyed building the colour scheme. Ambulances in the Netherlands are yellow, with a complicated pattern of diagonal red and blue stripes. As I did with the old Chevy, I recreated this using stacked plates. Stickers would have given me a cleaner look, but to me this looks more authentic as a LEGO model. It is good to go for a few more years.

2 comments on “New wheels for my LEGO Ambulance service”